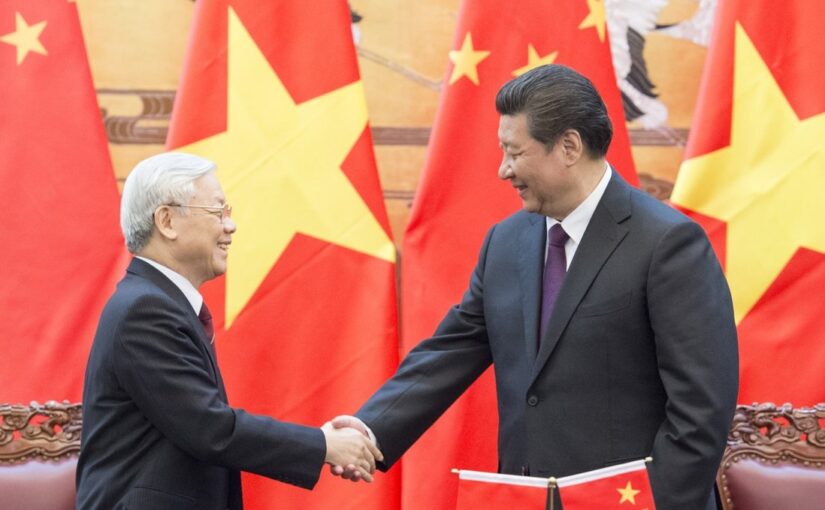 We are pleased to reproduce this account in CGTN of the recent phone conversation between Chinese President Xi Jinping and Nguyen Phu Trong, general secretary of the Communist Party of Vietnam’s (CPV) Central Committee. Both leaders emphasised that communist party-led rule and the development of the socialist system is the core of the two countries’ shared interests.

Chinese President Xi Jinping and Nguyen Phu Trong, general secretary of the Communist Party of Vietnam’s (CPV) Central Committee, on Friday renewed their pledge to promote the socialist course of both countries, during a phone conversation.

President Xi, also general secretary of the Communist Party of China (CPC) Central Committee, said China and Vietnam, as socialist neighbors, share a community of destiny with strategic significance, and have a lot of common interests and concerns given the complex situation brought by the combination of the once-in-a-century world changes and COVID-19 pandemic.

He said, both countries should stick to the right direction, boost solidarity and cooperation, continuously promote the socialist cause, safeguard the fundamental interests of the two parties, the two countries and the two peoples, and contribute to peace and development of the region and the world at large.

Xi said safeguarding the ruling of communist party and the socialist system is the most fundamental strategic interest both China and Vietnam have in common, and China supports Trong to lead the CPV and the Vietnamese people in their socialist path that suits their own national realities.

China and Vietnam should carry out institutionalized exchanges on fields such as theory research, talent training and local party committee cooperation and deepen exchanges and mutual understanding between the counterparts of the two parties and the two countries, said Xi.

He said both countries should also strengthen coordination and cooperation in international and regional affairs, maintain peace and stability in the South China Sea, oppose the politicization of COVID-19 origins tracing, practice genuine multilateralism and promote the building of a community of shared future for mankind.

He said the CPV is ready to strengthen exchanges with the CPC, enhance mutual political trust, promote the strengthening of mutually-beneficial cooperation in various fields such as trade and economy, COVID-19, and people-to-people exchanges, promote the development of the socialist cause of both sides and jointly promote peace and stability in the region and the world.

Trong also extended his congratulations to the upcoming 72nd anniversary of the founding of the People’s Republic of China.