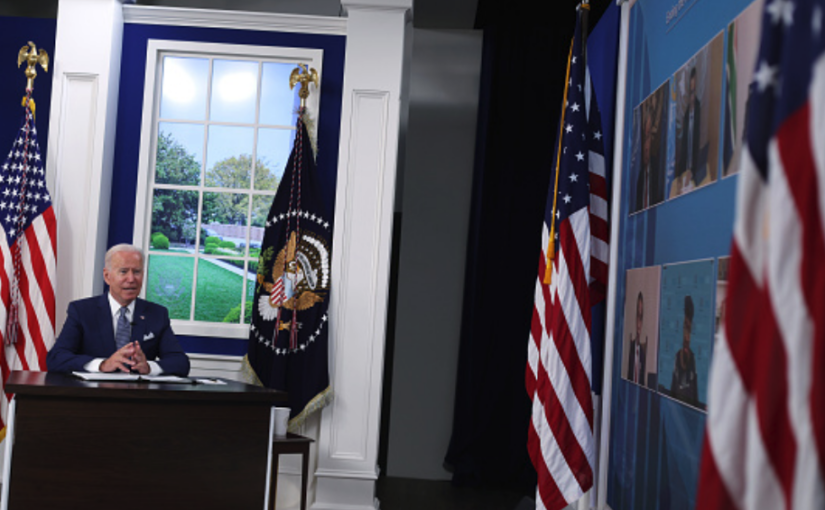 In this article for CGTN, Danny Haiphong exposes the motivation behind the Virtual Global COVID-⁠19 Summit hosted by Joe Biden on 22 September 2021. Having utterly failed to protect its population from the pandemic, having refused to properly learn from and cooperate with China, and having led the construction of a system of vaccine apartheid, the US now seeks to portray itself as a global leader in the struggle against Covid-19.

On September 22, U.S. President Joe Biden held a virtual summit on COVID-19 and pledged to increase U.S. assistance in the global fight to end the pandemic. Biden’s promises, when taken out of context, appear reasonable. The U.S. will pledge an additional $370 million to administer COVID-19 vaccines globally and work with the European Union to meet the World Health Organization (WHO)’s goal of ensuring 70 percent of the world’s population is fully vaccinated by the end of 2022. The U.S. will also increase its donations of ventilators, therapeutics and personal protective equipment (PPE) to lower-income countries.

Unfortunately, the summit was indicative of the selfishness that the United States has demonstrated throughout the COVID-19 pandemic. Rather than speak to world leaders as an equal, President Biden positioned the United States as the primary force capable of ending the pandemic. No humility was expressed in the face of the U.S.’s disastrous response to the pandemic up until this point. The United States leads the world in both COVID-19 cases and deaths.

Furthermore, history has proven that promises made by U.S. leaders are rarely kept. The U.S.’s policy on COVID-19 vaccine distribution is a key example. In May, the Biden administration signaled that it would wave vaccine patent restrictions to make Pfizer and Moderna vaccines more accessible to the world. This move was largely symbolic, as it has taken months for the U.S. to increase its donations to the WHO. “Vaccine apartheid” has been the result. Poorer, non-white countries have average vaccination rates of less than 10 percent of the population while the U.S. and its Western partners have stockpiled vaccines to the point where millions of doses are nearing their expiration dates.

The summit was thus an attempt by the United States to communicate strength when humility is needed most. Biden stated that the virtual forum was a clear sign that “democracies can deliver” on promises to improve the global situation. He firmly asserted, however, that the U.S. was most interested in its own citizens first and the global population second. Such an approach continues the U.S.’s longstanding trend of politicizing COVID-19 at the expense of real cooperation.

The truth is that the “democracies” Biden speaks of lack a historical record of fighting the pandemic in the interests of the majority of humanity. The inadequacies of Western-style governance have been on full display since the beginning of the pandemic. Democracy has been championed in the U.S., the UK and the EU with regard to individual property rights and the “freedom” to choose. For millions who enjoy Biden’s version of “democracy,” this has meant the freedom to contract COVID-19 and possibly perish with little assistance from society. A general lack of trust has been sown across the Western world as governments have abdicated their responsibility to protect human life. The United States and its European allies possess all of the resources required to lead the fight against COVID-19, but none of the will.

Biden did not mention China during the summit and has done little to mend relations so that robust cooperation between the two countries can occur. Yet China has demonstrated the most consistent commitment to defeating the pandemic out of any other major economy. More than one billion Chinese citizens are fully vaccinated and the central government has delivered nearly the same number of doses to the international community. Furthermore, China possesses the most effective public health response to the crisis as evidenced by its low case and death rates.

By contrast, there is no reason to trust the U.S. in fulfilling the modest commitments outlined at the virtual summit. Public health advocates say that the U.S. pledge will not come to fruition fast enough to ensure that the spread of COVID-19 is curbed around the world. Furthermore, the U.S. has not yet pledged to make the COVID-19 vaccine a public good. This means that the U.S. and other countries seeking access to Pfizer or Moderna vaccines must negotiate with private manufacturers at costs that are entirely out of reach for lower-income countries. China, on the other hand, has long committed to doing the opposite.

The U.S.’s ongoing failure to learn from and cooperate with China in the fight against the pandemic has been a mistake of historic proportions. Biden’s Global COVID-19 Summit was an exercise in American selfishness which offers no indication that the U.S. will reverse its dangerous course. The U.S. continues to place hegemony over the priorities of humanity. While Biden speaks of increasing cooperation, his administration remains committed to an “America First” attitude. This attitude translates into policies of endless war, economic inequality and social duress rather than concrete actions that can truly bring an end to crises such as COVID-19.