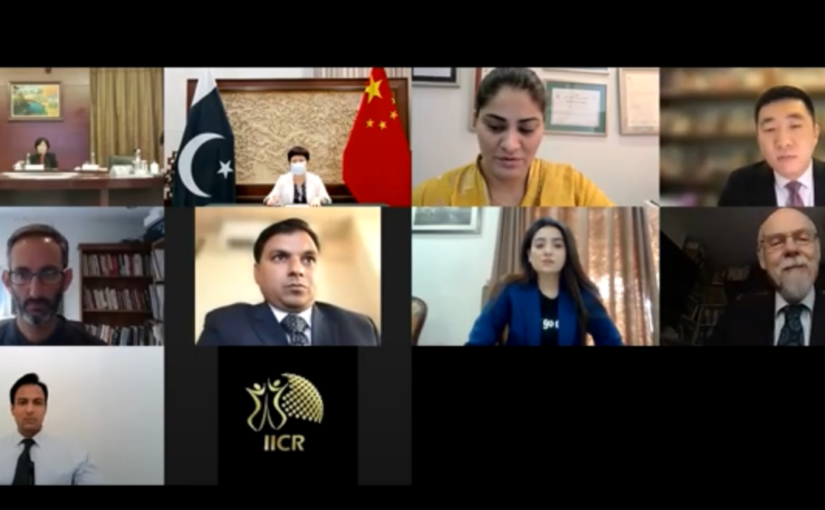 On 24 September 2021, the Islamabad Institute of Conflict Resolution (IICR, an Islamabad based think tank) and the China NGO Network for International Exchanges (CNIE) held a webinar of international experts to expose the Western media’s propaganda in relation to the treatment of Uyghur Muslims in Xinjiang. Friends of Socialist China co-editor Carlos Martinez was among the speakers. The video is embedded below, along with a list of the speakers and a report of the event, republished from Asia Free Press.

ISLAMABAD, Sep 24, (Asia Free Press): The experts from UK, Pakistan and China on Friday have rejected the US and its allies allegations of Muslims genocide in the Muslim majority territory in northwest China.

Speaking at a webinar organised by the Islamabad Institute of Conflict Resolution, a Islamabad based think tank, a prominent British scholar Carlos Martinez said that living in London he is exposed to very intense media propaganda in relation to Xinjiang.

“The Uyghur population from 2010 to 2018 increased from 10.2 million to 12.7 million, an increase of 25%. In the same period, the Han Chinese population in Xinjiang increased by just 2 percent. [so] if there were a genocide taking place in Xinjiang, wouldn’t we expect to see a refugee crisis? Wouldn’t we expect to see refugee camps set up on the borders with Pakistan and Kazakhstan?,” he questioned.

He added that the US waged genocidal wars in Iraq and Libya, leading to the displacement of millions of people – to a refugee crisis that is still continuing today.

“How is it possible that China is carrying out a genocide but not creating any refugees?,” he questioned while referring to the US and its allies allegations of Uyghurs genocide by Chinese government.

Martinez, who visited Xinjiang in 2020 after US and its allies accused China for genocide in Muslim majority area, said he went there to sought any evidence but he could not found any reality and evidence to prove that Washington charges against China are true.

“I personally went to Ürümqi in January 2020, with a group of friends. We walked around freely and certainly didn’t see any evidence of religious or ethnic oppression. In fact we saw hundreds of Uyghur Muslims, wearing distinctive Uyghur clothing, going about their normal lives,” he said.

“Western media said that mosques have destroyed by Chinese government, Uyghurs are in jails and their culture has been eliminated, its all propaganda,” she said and adding she met with local people and all of them rejected the western media propaganda and termed it “fake news”.

Currently there are more than 25,000 mosques, which are running by the local Muslim community while Chinese government providing them funds for renovation and other facilities of the mosques.

The Chinese government also established hundreds education enters for locals to train and educate them to run their own businesses.

“Being a journalist i visited that region and believe me there was no reality in the propaganda that is spreading by United States through their western media,” a Pakistani journalist Zamir Assadi said.

He added that Pakistan has rendered huge sacrifices, lost over 80,000 lives and over $150 billion lose to its economy because of the so-called US war on terror in Afghanistan but western media never has never appreciated that sacrifices and now trying to make Pakistan as scapegoat for their failure.

“So, US has its own political agenda and now after Afghanistan, Iraq, Libya they want to use Xinjiang as weapons against China because to halt Beijing economic development,” he added.

London based scholar professor Hugh Coodacre also showed displeasure over US campaign against China, using Xinjiang as propaganda toll and said he is working with Pakistani community in London to counter this propaganda which is spreading against China.

Briefing the participants about the peace and development in Xinjiang, Vice-President of CNIE, former Vice-Minister of the International Department of CPC Central Committee Xu Lvping, said that a few western countries have fabricated and spread lies about Xinjiang, maliciously discredited the Communist Party of China and the Chinese government, with extremely sinister intentions, and their actions have been despised by people in various countries.

“Both history and reality have proved that Xinjiang nowadays enjoys the best period of prosperity and development in history, with people of all ethnic groups living in harmony and working in peace and contentment.”

The living standards, health and education of ethnic groups have been widely improved.

She added that Xinjiang has been free from violent terrorist cases for more than four consecutive years.

“The society is safe and stable, and the people’s sense of security has been greatly improved. It is the people living in Xinjiang who know it best.”

The rights to religious belief, culture and language are respected and protected by law. It is a beautiful homeland where people of all ethnic groups live a happy life.

The $64 billion China Pakistan Economic Corridor — a network of roads, railways, and pipelines — is aiming to connect China’s strategically important northwestern Xinxiang province to the port of Gawadar in far away in Balochistan.

While the corridor will give China easy access to Africa and the Mideast, and Xinjiang will become world’s business hub while it will make Pakistan earn billions of dollars and spur business activities along the road network replacing the fabled Silk Road.

US committed genocide of Muslims

“I went Xinjiang 9 times but never saw any incident of human rights violation or any brutal action of Chinese authorities against Muslims,” Mustafa Hyder, Executive Director of Islamabad based think tank said.

He rejected the allegations against Chinese government and said Washington want to destabilise the Muslim majority region of China.

“US invaded against several Muslim countries, killed thousand innocent Muslims and committed their genocide,” he said.

“Thousand innocent Muslim killed by Indian forces in Kashmir and now killing in other parts of India but never US speak for those innocent people, which show their hypocrisy,” she said.