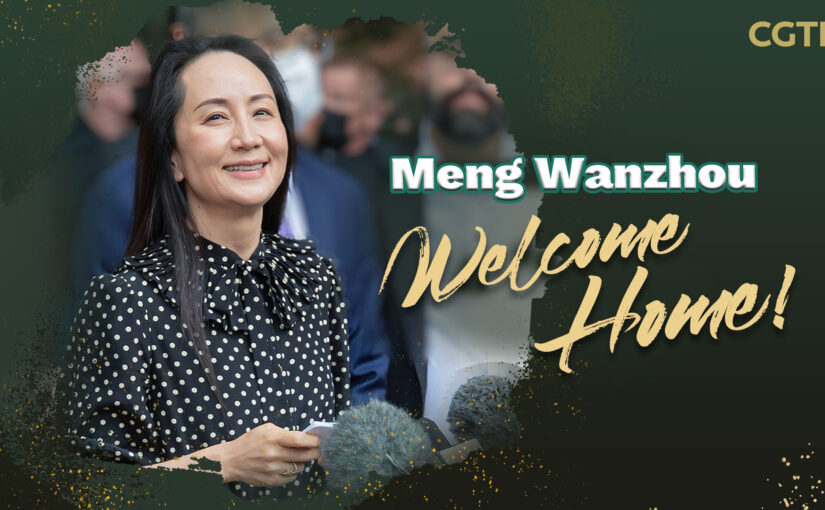 This article by Radhika Desai, reposted from CGTN, shines a light on the geopolitical motivations and the illegality of Meng Wanzhou’s detention, and situates it within the US’s ongoing attempts to preserve a “rules-based international order” based on unilateralism and hegemonism.

The release of Meng Wanzhou, chief financial officer of Huawei, from her detention in Vancouver and her immediate return to China end a complex saga that would fill multiple volumes.

They would concern the U.S.’s underhand moves to meet the technological and competitive challenge of Huawei, particularly on 5G technologies. They would detail the U.S.’s mixed and ambiguous motivations concerning China. It would further involve Canada’s own entanglement in tense relations between its two biggest economic partners. All this before we even got to the details of the case against Meng. Here we can only make a few limited but critically important points.

Let’s start with the deeply problematic circumstances of Meng’s arrest. Since the U.S. District Court for the Eastern District of New York issued an arrest warrant on August 22, 2018, Meng had traveled through many countries with an extradition treaty without being arrested.

The reason was simple. Extradition is only possible when the crime on which Meng was charged was also a crime in the country through which Meng was traveling. “Fraud and conspiracy to commit fraud to circumvent U.S. sanctions on Iran” was not a crime in these countries.

Moreover, that charge arises from unilateral (and therefore, we must mention here, illegal) sanctions imposed by the U.S. on Iran. It is hardly news that these sanctions, and U.S. efforts to make them stick, have constituted illegal harassment of not only Iran, but also many U.S. allies. So, the first point we must underline is that the very basis of the arrest is illegal.

Moreover, without such illegal sanctions, even if the alleged “fraud” had been committed, it would be a matter between the “fraudster” and the entity “defrauded” and would, at worst, have involved a comparatively small fine. In these circumstances, a new charge was needed and was concocted: that Meng, a Chinese national, had lied to a British bank, HSBC, in Hong Kong.

Since the alleged crime was committed by a foreign national on foreign soil against a foreign institution, the U.S. could only claim standing to charge Meng because her allegedly fraudulent transaction would have passed through U.S. servers for some nanoseconds. This reasoning would normally be a joke in bars frequented by lawyers.

However, the humor was clearly lost on Canadian authorities and, after six European and Latin American countries had already rejected U.S. demands for extradition, the Canadians complied. They did so, moreover, in a particularly ham-handed fashion, including, as Meng’s lawyers argued, illegally seizing her electronic devices and sharing information from them with the U.S.

The simple fact was that, at the time, the Canadian government was under pressure from the Donald Trump administration. The previous year, it had torn up the decades long North American Free Trade Agreement and tense and delicate negotiations on a new United States, Mexico, Canada Agreement were under way.

The political nature of the arrest was betrayed by President Trump when he repeatedly stated that he had the power to release Meng if China would agree to a trade deal agreeable to him and by Canada’s foreign minister, who said in December 2018 that “It is very important for Canada that extradition agreements are not used for political purposes.”

As Meng extradition hearing unfolded, it became more and more clear that, despite the judge’s initially quite questionable moves, despite the withholding of critical information by the U.S., irrefutable facts and arguments had emerged in Meng’s favor. Arguments were completed in mid-August, though the judge was not expected to deliver her verdict until at least October.

The problem was that even if the verdict went in Meng’s favor, unless the U.S. relented, the Canadian government could well be compelled to appeal and that would drag the process out for more years, even as much as a decade. During this time Meng would remain in detention, separated from her family and country.

The only solution was a deal with U.S. prosecutors and it has worked. If Meng has walked free and returned home without admitting guilt, it is chiefly because the case against her was so weak. Indeed, it was, right at its foundations, illegal and politically motivated.

Revealingly, the deal was announced only after last Monday’s Canadian elections, preventing the Trudeau government’s minority status from worsening.

The whole saga testifies to those countries who bang on about a “rules-based international order” and have sunk so low that they can only advance their interests by violating long-established international law.

One thought on “Radhika Desai: Release of Meng Wanzhou ends a contemptible mess of illegality”