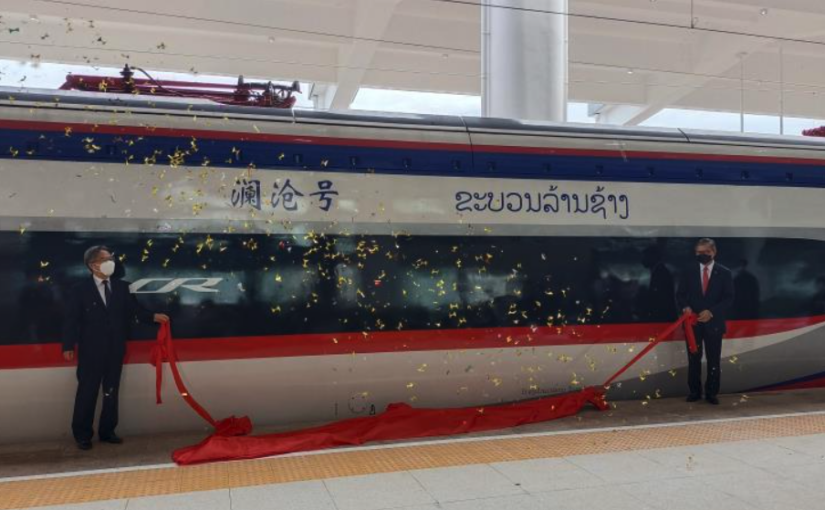 We are pleased to republish this report in Xinhua marking the completion of a high-speed railway linking China and Laos. The railway is an example of China’s win-win approach to relations with foreign countries and its support for sovereign development.

The EMU train was officially delivered to the Laos-China Railway Co., Ltd., a joint venture based in the Lao capital Vientiane in charge of the railway’s construction and operation, at a handover ceremony held in the station with the attendance of Chinese Ambassador to Laos Jiang Zaidong and Lao Minister of Public Works and Transport Viengsavath Siphandone.

The EMU, named Lane Xang, is to be put into the upcoming railway trial run. Laos was once called the Lane Xang (million elephants) Kingdom. Lane Xang, also known as Lancang, the name of the upper section of Mekong River in China, symbolizes the China-Laos relationship as good neighbors, good friends, good comrades and good partners.

The Lane Xang EMU is produced by Chinese company CRRC Corporation, with its design based on Fuxing bullet train.

The China State Railway Group directed the design and manufacture companies to actively adapt to cross-border transport situation, fully meet the needs of the user, and make necessary improvements.

With advanced technology, the Lane Xang EMU is safe, comfortable and reliable with large passenger capacity but low operating costs, and fully meets the main performance indicators required by the China-Laos railway operation.

The Lane Xang EMU is painted in the Lao flag colors of red, blue and white. The interior design integrates elements of traditional Chinese and Lao cultures, embodying the Lao people’s vision of a better life and the friendship between the two peoples.

According to the China State Railway Group, the Lane Xang train, with maximum operating speed of 160 km per hour, consists of nine carriages, including a locomotive, a dinning coach, a first-class and six second-class coaches, and provides altogether 720 seats.

The air-conditioned carriages are spacious with the comfortable seats installed with power outlets of Chinese and Lao standards. The dining coach is well equipped to meet the needs of passengers for food and leisure; the screens, broadcasts and service signs are all in three languages of Chinese, Lao, and English; and the fourth carriage with barrier-free areas is equipped with special seats, handrails, toilets, SOS call buttons and Braille guide signs to facilitate the travel of disabled passengers.

The China-Laos Railway is a docking project between the China-proposed Belt and Road Initiative and Laos’ strategy to convert itself from a landlocked country to a land-linked hub.

The electrified passenger and cargo railway is built with the full application of Chinese management and technical standards. The construction of the project started in December 2016 and is scheduled to be completed and operational in December 2021.