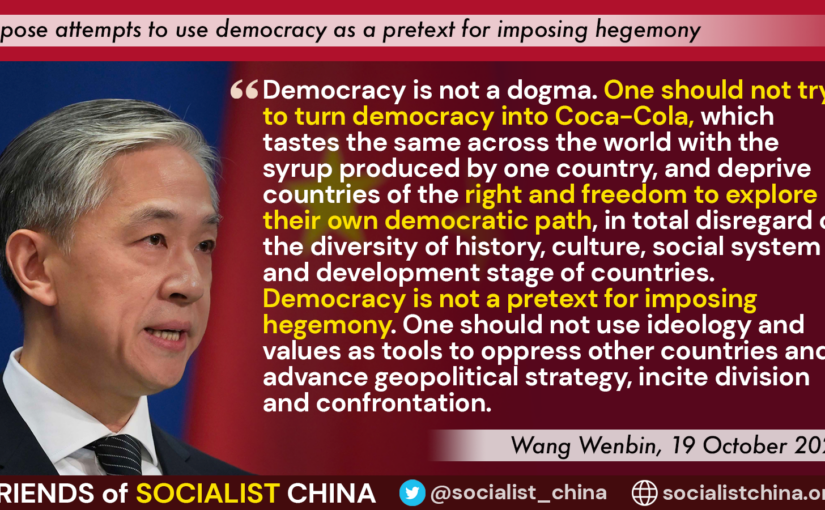 At the Ministry of Foreign Affairs press conference on 19 October 2021, Foreign Ministry Spokesperson Wang Wenbin made an important point about how the US government, via such measures as its forthcoming ‘Leaders’ Summit for Democracy’, is attempting to use its own specific definition of democracy as a means of inciting division and confrontation.

Democracy is not a slogan. One should not use “democracy” as an excuse to cover up one’s own incompetence and failure in governance, and let its people pay a heavy price for rampant racial discrimination, enlarging social divide and widening wealth gap.

Democracy is not a dogma. One should not try to turn democracy into Coca-Cola, which tastes the same across the world with the syrup produced by one country, and deprive countries of the right and freedom to explore their own democratic path, in total disregard of the diversity of history, culture, social system and development stage of countries.

Democracy is not a pretext for imposing hegemony. One should not use ideology and values as tools to oppress other countries and advance geopolitical strategy, incite division and confrontation in the international arena and push the world back to the dangerous Cold War era under the banner of democracy.

What is urgently needed now is not a so-called “summit for democracy” or establish an “alliance of democracies”, but efforts to strengthen global coordination and cooperation on the basis of observing the norms governing international relations represented by the UN Charter and jointly address global challenges such as the ongoing pandemic and climate change, and advance the cause of human progress.

Provoking estrangement, division and confrontation in the name of democracy is an act of trampling on and betraying the democratic spirit and values. It will only bring turbulence and chaos to the world and undermine peace and development of mankind. This is bound to be resisted and opposed by the international community.