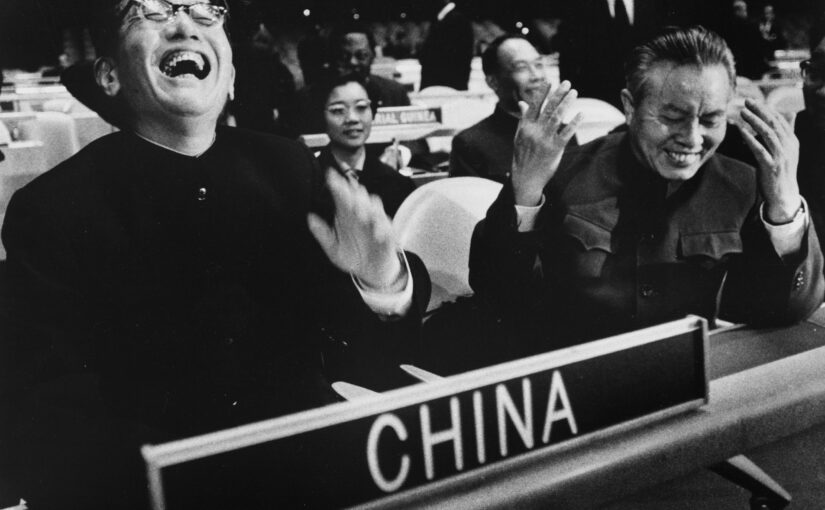 The support of the independent African nations was crucial for the restoration of China’s legitimate seat at the United Nations fifty years ago, on 25 October 1971. This article from Xinhua captures the excitement and emotion of that day.

Fifty years ago today, the 26th Session of the United Nations General Assembly (UNGA) adopted Resolution 2758 with an overwhelming majority and decided to restore the lawful seat of the People’s Republic of China (PRC) in the world body.

In the conference hall at the UN Headquarters located in New York City, thunderous applause and cheers echoed from all sides of the hall.

Former Permanent Representative of Tanzania to the United States Salim Ahmed Salim, as the representative of the campaign for this cause, congratulated China with cheers and applause on the spot, which left an unforgettable memory.

Salim was granted China’s Friendship Medal when the PRC celebrated the 70th anniversary of its founding in 2019. In a written interview with Xinhua, he said the world has seen tremendous changes over the past decades, but he still remembered the day when the country’s lawful seat at the UN was restored.

Salim told Xinhua that it “is a great historic moment” not only for him, but also for Tanzania and all the African countries which have made great efforts to support the milestone event.

In an interview with Xinhua ahead of the 50th anniversary of the milestone event, Mwaanga reminisced about how Africa supported China’s return to the UN.

Pushing for the adoption of a resolution over the matter was not easy, as some Western countries, including the United States, were determined to maintain the status quo, the former diplomat said.

Mwaanga said the African representatives felt obliged to change the situation because they believed there was no way that Taiwan, which is part of China, could represent China.

To counter the move of the United States, the African group sought support from other countries and asked them to be co-sponsors of the resolution, which needed a two-thirds majority to get passed, Mwaanga said.

“So by the time we were finishing with voting, it was quite late at night and when it was announced we were all very happy,” he recalled.

Mwaanga said that China has, no doubt, played a major role in the UN system in the last 50 years in such aspects as safeguarding global peace and security.

China-Africa relations, he said, have been strong in the last 50 years, during which China has helped African countries fight poverty, and improve health care, education, and infrastructure.

He believes that the China-Africa relations have a bright future because the growth prospect of the ties has been further cemented by the Forum on China-Africa Cooperation and the Belt and Road Initiative, which have both been embraced by African countries.

Referring to the ongoing COVID-19 pandemic, Mwaanga thanked China for providing African countries with vaccines and other medical supplies, and further commended China for its response to the pandemic, saying that the rest of the world should learn from China’s handling of the public health crisis.