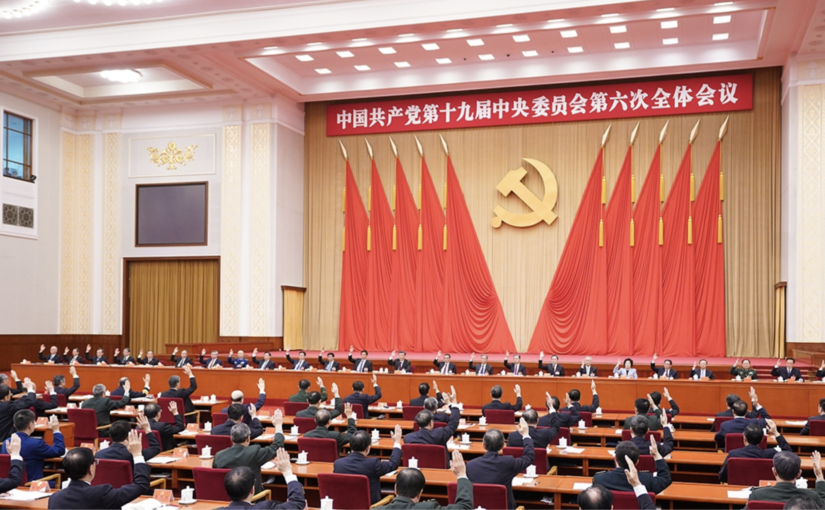 We’re pleased to republish this article by Martin Jacques, originally published in Global Times on 15 November 2021. Discussing the resolution adopted at the sixth plenum of the 19th Central Committee of the Communist Party of China, Jacques notes the profound confidence the Chinese people have in the CPC – “the most successful political party the world has ever known”. Since the founding of the People’s Republic of China in 1949, the Chinese people have experienced an enormous and unprecedented improvement in their living standards, during each era and every generation of leadership. Much to the surprise and dismay of Western imperialism, Socialism with Chinese Characteristics has continued to demonstrate great vibrancy and resilience, and has played the key part in laying the ‘end of history’ narrative to rest.

The historic resolution adopted at the sixth plenum of the 19th Central Committee of the Communist Party of China (CPC) demands careful study and serious reflection. Alas, most Western commentary will instead overwhelmingly interpret it in terms of the president’s growing power. This is to ignore its historical significance. There have previously been only two such historic resolutions, one in 1945 that confirmed Mao Zedong’s role and one in 1981 that affirmed Deng Xiaoping’s new reform strategy. There have been only three such resolutions in the entire 100-year history of the CPC. In other words, they are not to being taken lightly.

By any standards, this is an extraordinary document.  It reviews the record and achievement of the CPC since its inception in this centenary year. What other political party anywhere in the world would attempt such an exercise? The US Democrats? The British Conservatives? Successful as they have sometimes been, their periods in office have been limited and achievements decidedly modest. In contrast, the CPC has governed China for over 70 years. During that period the CPC has transformed China, taken it from the abyss of semi-colonisation, division, and abject poverty, to become one of the two most important countries in the world. The CPC is the most successful political party the world has ever known, a truly remarkable achievement. The great beneficiaries of this have been the Chinese people: Never before in the history of the world’s most historically successful civilization have they enjoyed such well-being and prosperity. Nor is there any sign that the CPC’s energy, competence, ambition, or intellectual vigour is flagging. Typically, Western political parties run out of steam after a term or two in office, perhaps more in exceptional cases; as the Communique of 6th plenary session of 19th CPC Central Committee says, “a hundred years on from its founding, the Party is still in its prime.” There are none of the tell-tale signs of ageing. On the contrary, its eyes are relentlessly focused on the future.

The references in the resolution to the future almost exclusively concern China. It is a reminder that the CPC is first and foremost overwhelmingly preoccupied with China’s own development. This is the abiding priority. There is no grandstanding about China’s growing influence in the world or becoming the world’s largest economy: Projections about the future are only about China, namely China’s great rejuvenation and achieving its second centenary goal. The only reference to China’s present international standing bears quoting for its modesty and restraint: “China has broken new ground in its diplomatic endeavours amid profound global changes and turned crises into opportunities amid complex situations on the international stage. These efforts have resulted in a marked increase in China’s international influence, appeal, and power to shape.”

A striking feature of the resolution is the sense of continuity that it affirms. Both the previous historic resolutions, those in 1945 and 1981, came after a period of division. This resolution is very different. The resolution affirms the Mao Zedong, Deng Xiaoping, Jiang Zemin and Hu Jintao periods in an overwhelmingly positive light, thereby presenting and emphasising quite rightly the underlying continuity that has characterised the CPC’s rule, whatever the missteps and wrong turnings there may have been on the way. In fact, the only critical note to be found, which appears in the context of the challenges that Xi Jinping’s leadership has faced, is the following: “It has solved many tough problems that were long on the agenda but never resolved and accomplished many things that were wanted but never got done.” Corruption is an obvious example.

Not surprisingly, the resolution is imbued with enormous self-confidence. Whatever the problems, and they are enormous, China stands on the eve of perhaps its greatest ever historical period. At the core of this self-confidence is the country’s extraordinary achievements over the last seven decades. There is a new sense of unity and oneness, of cohesiveness, and a pride in what it describes as “China’s miracle of long-term social stability.” This picture stands in stark contrast to the one painted in the West, of the Xi period in particular, that constantly majors on repression and authoritarianism. It can be dismissed as wishful thinking in the face of what for the West is China’s inexplicable rise and extraordinary success.

This not least concerns the matter of governance. Long decried in the West, China’s governance has finally come of age in a global context. The West believed that the reform period would inevitably lead to the adoption of a Western model of governance. It is now patently clear that this was an illusion. As the resolution argues: “The Party has led the people in pioneering a uniquely Chinese path to modernization, creating a new model for human advancement.” “Socialism with Chinese characteristics” is not Western capitalism by another term, it is a new kind of model that, by its achievements, is now demanding the attention of the world.