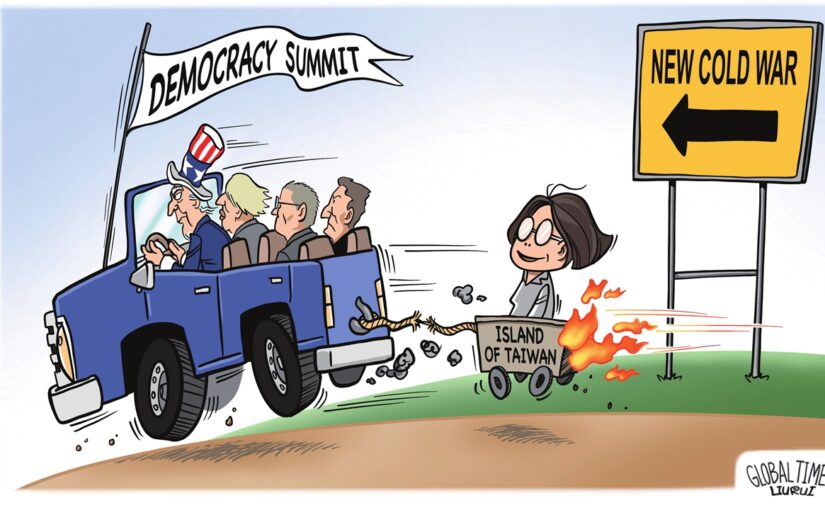 This significant editorial from leading Chinese newspaper Global Times warns that the Biden administration is making a dangerous and provocative mistake in inviting the Taiwan authorities to its so-called Summit of Democracies next week. This dangerous escalation on the part of the US lends increased topicality and indeed urgency to our own Summit for Socialist Democracy, to be held on December 11, and which includes Chinese, Cuban, Vietnamese, Korean and Venezuelan perspectives among others.

The US Department of State released on Tuesday evening the list of 110 “participants” to the “Summit for Democracy.”

What caught the immediate attention of worldwide media were, first, the island of Taiwan was on the list; second, several countries were missing from the list, not just China and Russia, but also Turkey, a NATO member, Hungary, an EU and NATO member, and Singapore, Thailand and Vietnam from Asia, and all the countries from the Middle East except for Israel and Iraq.

Taiwan being invited was the most eye-catching. In addition to being thankful to the Biden administration, the Democratic Progressive Party (DPP) authority immediately announced its representatives to the summit including Audrey Tang Feng, a member of Taiwan’s “executive authority,” and Hsiao Bi-khim, the island of Taiwan’s representative to the US.

It’s apparent that the DPP authority played along with the US in a concerted effort to minimize the impact of Taiwan’s participation. In terms of the same consideration, the US State Department deliberately used the term “participant list” instead of “country,” even though the majority of the invited participants are countries with the exception of Taiwan and Kosovo.

Media worldwide widely reported that Taiwan island being invited by the US to the summit for democracy would probably “irritate” China. It has not been long since the virtual meeting between the top leaders from the two countries. The US wants to ease relations with China as it needs China’s help in a number of issues. As a result, the US was careful in its choice of words when it released the list and let Taiwan announce its lower-level representatives as soon as possible to reduce the risk intentionally.

There is no need for China to feel “grateful” to the US in this. Other participants, apart from Kosovo, are sovereign countries. With Taiwan authorities being invited to a conference like the upcoming one, the case has already become a provocation to China. Due to China’s serious preparations for military struggles with Taiwan island and severe warnings against official-level collusion between the US and the island, the US had to take a step back in making such a “maneuver.”

When the White House announced in August it would hold a summit for democracy, the Global Times published an editorial, warning: If the US invites high-level Taiwan official to participate in the meeting, “PLA fighter jets will fly over the island,” realizing a historic cruise to declare our sovereignty. They must be clear: PLA fighter jets flying over the island is a long-awaited wish of all Chinese people. All we have been waiting for is an opportunity. For the Chinese people, this move will speak louder than thousands of words and can overwhelm various dirty tricks in the collusion between the US and Taiwan island.

The Biden administration is promoting its ties with Taiwan through the “salami-slicing” tactics. It would only be an illusion if the US ever thinks it can continue to use the trick forever. The Chinese mainland is making progress in its military preparations, which have specific targets. When the preparations are carried out, they will clear all the slices the US and Taiwan island had cut.

It is obvious that almost everyone is sure that the army on the Taiwan island dares not open fire if the mainland’s warplanes fly over the island because that will mean the outbreak of a war, and the PLA will definitely carry out a destructive strike on the island’s armed forces. The mainland is already fully prepared in many ways to deal with possible reactions from the US. It has created huge pressure on the US which wants to intervene with high intensity in the Taiwan Straits. The mainland is determined and confident to overwhelm the US and Taiwan.

We have noticed that the US and Taiwan have become more and more afraid of the mainland’s will to oppose Taiwan secessionism and promote reunification. They have already believed that the Chinese mainland is not bluffing, but is seriously preparing for a showdown in the Taiwan Straits. Thus, they need to stay away from the mainland’s red line and stop thinking that there will be any chance for them.

The general public on the mainland is getting increasingly impatient with the actions of Taiwan secessionists that have been dissipating our energy. And the voices that demand the country’s reunification by force are getting louder and louder. The US and the secessionist forces in Taiwan must understand that no matter whether Beijing sends its military aircraft over the island, shoots down some of Taiwan’s warplanes, or sends a ship to ram a provocative US warship, it will surely be welcomed by the people on the mainland.

The government of the mainland has already been authorized by its people in advance to punish Taiwan secessionists by force.