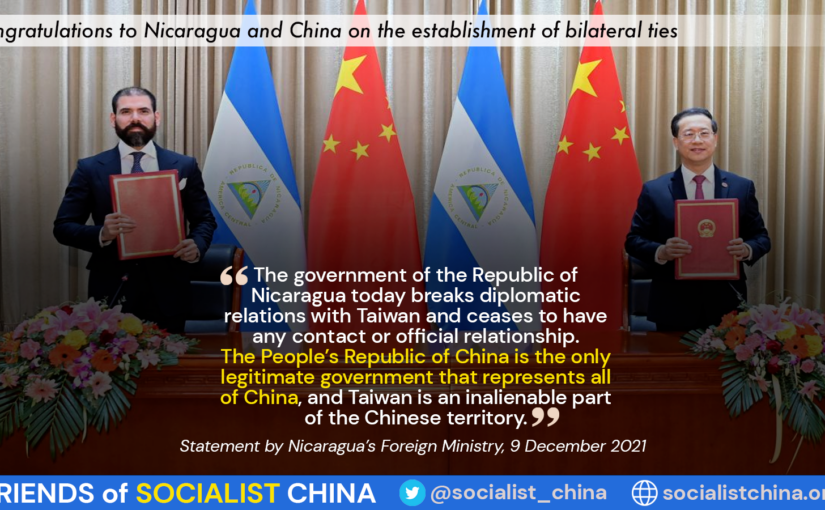 On 9 December 2021, Nicaragua’s Foreign Minister Denis Moncada announced the resumption of diplomatic relations between the People’s Republic of China and the Republic of Nicaragua. This was followed the next day by a meeting in the northern Chinese city of Tianjin between Chinese Vice Foreign Minister Ma Zhaoxu and Laureano Ortega, the representative of the Nicaraguan government and a son of President Daniel Ortega, at which the two countries issued a joint communique announcing the re-establishment of their diplomatic relations.

This development is welcome and inspiring news for all those committed to anti-imperialism and especially for all those who care about the prospects for the development of socialism in Central and South America.

According to the Chinese Foreign Ministry, Ma Zhaoxu pointed out: “Upon resumption of diplomatic relations, China stands ready to work with Nicaragua on the basis of mutual respect, equality and mutual benefit to enhance cooperation in various fields and steadily develop bilateral relations to the benefit of the two countries and peoples. China supports Nicaragua’s efforts on COVID response and is ready to actively carry out wide-ranging cooperation with Nicaragua in such areas as economy, livelihoods, social development, infrastructure, trade and investment. China will further strengthen communication and coordination with Nicaragua on multilateral affairs. China looks forward to working with Nicaragua to safeguard world peace, promote common development and build a community with a shared future for mankind.”

For his part Laureano Ortega, “emphasised the historic significance of this day. He noted that resuming diplomatic relations with the People’s Republic of China is completely in line with the fundamental desire and interests of the Nicaraguan people. The government of Nicaragua recognises the one-China principle and recognises that the government of the People’s Republic of China is the sole legal government representing the whole of China and Taiwan is an inalienable part of China’s territory. Nicaragua has already severed the so-called ‘diplomatic relations’ with Taiwan and undertakes that it shall no longer have any official relations or official exchanges with Taiwan. Nicaragua highly commends the vision of building a community with a shared future for mankind proposed by President Xi Jinping. Nicaragua supports the Global Development Initiative put forth by China, stands ready to actively participate in the Belt and Road cooperation, and looks forward to carrying out wide-ranging cooperation with China in the political, economic, social and cultural fields. Nicaragua will play an active part to help promote China’s relations with Latin American and Caribbean countries and advance South-South cooperation. Nicaragua is convinced that by working in solidarity and coordination, the two countries will jointly safeguard the process of multilateralism, promote common development, and deliver benefits for both countries and peoples.”

“The Nicaraguan side noted that exchanges between the two countries date back a long time. The two governing parties and two countries share revolutionary friendship and brotherly bonds.”

This is precisely the most important context in which the re-establishment of diplomatic relations between the two countries takes place. The Communist Party of China (CPC) and the Sandinista National Liberation Front (FSLN) of Nicaragua are revolutionary parties which both have a glorious history of struggle, and which are united by common goals and ideals. Students of Chinese history might be aware that, when Comrade Mao Zedong passed away in September 1976, the FSLN, then engaged in armed struggle against the dictatorial and pro-imperialist Somoza regime, was among the foreign political parties whose condolences were listed in Peking Review.

The Sandinista revolution triumphed in July 1979, but diplomatic relations were not established with China until 1985. During that period, China continued to express its support for the Nicaraguan revolution. The delay did not really stem from any bilateral problem but most likely reflected the very close relations between Sandinista Nicaragua on the one hand and the Soviet Union, Cuba and Vietnam on the other, at a time when the relations between China and the latter three countries were poor. However, with the establishment of diplomatic relations, President Ortega visited China along with the Democratic People’s Republic of Korea, a country that has staunchly supported the Sandinista revolution since its earliest days.

In 1990, ground down by a brutal terrorist war waged by the ‘contra’ forces supported by US imperialism, and reeling from the loss of vital support from the Soviet Union and the European socialist countries, the Sandinistas lost power and a new oligarchic government began to systematically dismantle all the gains that working people had made in the revolution.

Finally, the Sandinistas returned to office in January 2007. The reasons for the delay in resuming relations with the PRC are quite complex. Partly it coincided with the period of ‘diplomatic truce’ between the mainland and Taiwan, when the Kuomintang administration of Ma Ying-jeou pursued better relations with Beijing and eschewed outright separatism. Partly it reflected that the Sandinistas were originally able to return to office in part by making tactical agreements with some sections of the Nicaraguan right. Moreover, Taiwan had emerged as the major investor in Nicaragua, its investment sustaining some 100,000 working class jobs, an important factor in a small and poor country like Nicaragua.

Nevertheless, throughout this time, Nicaragua made considerable efforts not to indulge Taiwan’s provocations against the mainland and to retain and develop cooperation with China where possible. This included the involvement of a Chinese company in the plan to build an interoceanic canal which will link the Atlantic and the Pacific. It should be noted that this massive project was a dream of Nicaragua’s national hero Augusto César Sandino, from whom the Sandinistas take their name, just as China’s Three Gorges Dam was a dream of Dr Sun Yat-sen, the leader of China’s democratic revolution. It also included the maintenance of some links between the FSLN and the CPC and, in March this year, China and Nicaragua were among the 17 initiators of the Group of Friends in Defence of the Charter of the United Nations, an alliance of anti-imperialist and independent countries.

The resumption of diplomatic relations between Nicaragua and China coincided both with US President Biden’s preposterous ‘Summit for Democracy’, to which neither China nor Nicaragua were invited, but to which the Taiwan authorities were, and the US imposition of yet more sanctions against Nicaragua. Clearly in this context, any benefits of a relationship with Taiwan cannot compare with a strategic relationship with the People’s Republic.

We are pleased to reproduce below an interesting and comprehensive discussion between Ben Norton and Max Blumenthal on the Grayzone. This conversation covers some of the ground covered above, sets the development in a regional context, including analysis of Panama, El Salvador, Guatemala and Honduras, looks at relations between Nicaragua and Russia, and also highlights the implications for the development of the Belt and Road Initiative.