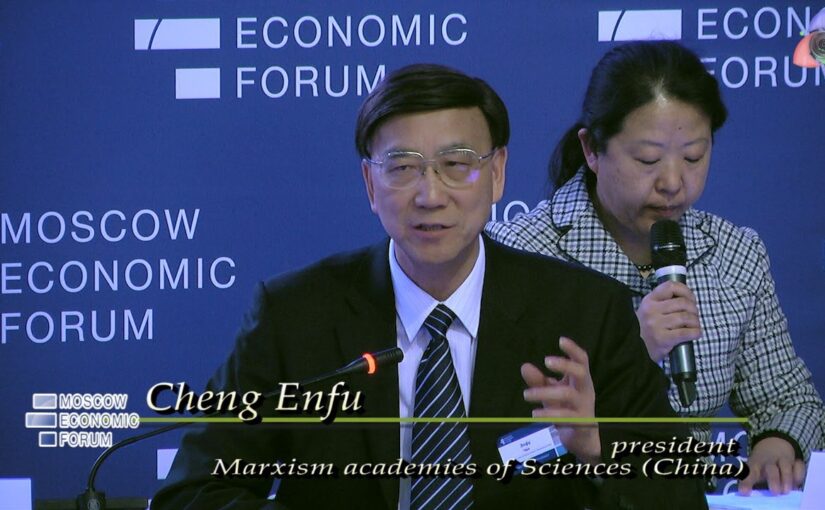 We are very pleased to publish the text of this important speech made by Cheng Enfu (Principal Professor, University of the Chinese Academy of Social Sciences, and President, World Association of Political Economy) to our Summit for Socialist Democracy held on 11 December 2021. The full event can be viewed on YouTube.

The key to a country’s democracy is whether the people are the masters of their own country. To that end, four important criteria must be considered in determining whether a country’s political system is democratic.

1. The right to vote is important, but more important is people’s wide participation

When people have the right to vote, they can freely express their personal will, but this is far from enough, because the equality in the political right of “one person, one vote” does not necessarily remove other inequalities in economic and social terms. To solve this problem, people must have the right to participate in an all-around manner. The right to participation is the kernel of democratic politics. A democracy in which the people have only the right to vote but not the right to broad participation, i.e., they are awakened only at the time of voting and then go dormant afterwards, is formalistic. Evidently, it is of equal importance to ensure and support the people’s position as masters and to allow them to participate deeply in the management of both national and social life, through elections in accordance with the law as well as through systems and means other than election.

In China, people have long gained the right to vote to express their personal will. In addition, the people have, in accordance with the law, participated in the management of state affairs, economic and cultural undertakings, and social affairs through various ways and forms, such as consultation, seminar with experts, inquiry meeting, demonstration meeting, talk, hearings, deliberation meeting, council meeting, criticism, and proposal, and have better exercised people’s democratic right of self-management, self-service, self-education, and self-supervision.

In contrast, democracy in the United States is often characteristic of an opposition between the purpose and outcome of democracy, where electoral democracy is stressed while governance-oriented participatory democracy is disdained. The reason for this is that American electoral democracy is a tool to transform capital power into political power. It follows the logic of capital in essence, is subjective to the erosion and manipulation by money from various large consortia and interest groups, so that the political direction of the successful candidate in election is swayed by money and small group’s interest, and it is difficult to represent the will and interests of the broadest mass of people. Therefore, the United States only has the formal democracy with the right to vote rights, but not the substantive democracy with the right for broad participation, which reveals that the democracy of “electoral fetishism” in the United States is a partial democracy at its best.

2. We need to note what promises are made in elections, and more importantly, we need to see how many of those promises are fulfilled after the election

The end of democracy should not be those promises made during the elections, but turning verbal promises into real actions. No genuine democracy exists if the people are called on only at the time of voting and then go into dormancy afterwards, or if they are only allowed to listen to slogans during the election campaign but have no say afterwards, or if they are favored only at the time of canvassing but are left out after the election. The ruling party and the government should consistently respond to the needs and demands of the people and turn verbal promises into effective action.

The Communist Party of China and the Chinese government at various levels have a strong and continuous attention and responsiveness to the interests and needs of the people. This is due to the fact democracy in China covers the five processes of democratic election, democratic consultation, democratic decision-making, democratic management and democratic supervision, thus forming a systematic “whole chain democracy.” This ensures that whatever is promised during the election process will be realized after the election.

On the contrary, the United States is often a “giant of words, but dwarf in action” with regards to election promises and their actual fulfilment. This is because the candidates in the United States do not really care about the demands of the general electorate, but only aim at getting more votes through the “show.” It is the money provider and interest groups that they truly care and pay back. The American people in the election process easily get a lot of verbal promises, but they are either dismissed after the election to become bank check that can never be cashed just like “moon in the water or flowers in the mirror,” or will only be fulfilled in a limited and temporary manner.

In China, the political procedures and rules are strictly stipulated by law in its political system. For example, the procedures and forms of the election of the National People’s Congress include initial inspection and consultation, preparatory election, anonymous ballot, and competitive election. There are both top-down nomination and bottom-up free election. It is a genuine procedural democracy. In addition, China’s system and laws have the advantage of nation-wide implementation under the principle of democratic centralization, with little interference from political lobbying and narrow interest groups. As a result, China’s system and laws truly unify the expression of public opinion and the satisfaction of public need, thus achieving a democratic system with strong implementation and high overall performance.

In contrast, although the US system and laws also provide political procedures and rules, they are much weaker than those in China. The reason for this is that interest groups and major political parties, which are based on private ownership of the means of production, tend to weaken certain political procedures and rules intentionally or unintentionally through games or collusion. Moreover, the goals and results of the implementation of its system and laws are very different, hence bills proposed by the president may be rejected by the Congress, bills proposed by senators may be rejected by the House of Representatives, and bills proposed by Republicans may be rejected by the Democrats. Any one veto can lead to the delay of a reasonable and legitimate bill or even the situation of “discussion without decision, and decision without action,” as exemplified by the US government shutdown due to the fiscal crisis. A bill is unlikely to be truly implemented or successfully implemented in such a political environment that is often in white-hot competition, and would often become a laughing stock as a “rubber check.”

4. Democratic rules and procedures for the operation of power are important, but more important is whether power is truly monitored and checked by the people.

The people are the legitimate source of all power in the state. Power can only play its critical role if it is truly subject to strict supervision and control by the people on all fronts.

After a long period of practice and improvement, China has institutionalized and standardized its rules and procedures for the operation of power, further enhanced the efficacy and anti-corruption orientation of power, while preventing the possibility of unconstrained and capital-controlled power. For example, a system has been established in which those in power dare not be corrupt, corrupted official are severely punished, and bribery is combated. Transparency has been improved in party affairs, administrative affairs, and judicial affairs. The system of questioning, accountability, economic responsibility audit, resignation and dismissal has been improved. At the same time, regulations have been implemented to ensure internal supervision within the party and the government, and supervision by the National People’s Congress (NPC), democratic parties, people without party affiliation, scientists, and the masses, which creates an open and transparent environment for power operation. This multi-level system of supervision and regulation in China carries forward the fine tradition of the ruling party, the National People’s Congress, and the people’s government, namely, close connection with the masses, self-criticism and self-revolution.

In contrast, the self-claimed rules and procedures for the operation of power in the United States contains the selfish class interests, party interests and personal interest of a very small number of people in power from various sectors of society. The function of such rules and procedures is to prevent these small group of people from internal fight, conflict and friction. Therefore, it is very difficult to subject power in the United States to wide supervision and strong checks by the people. In many political scenarios, the majority of the American people are puppets manipulated by the bourgeois elites with a pre-programmed plot. What they do is to cooperating through performing their role in the play called democracy, without being able to effectively supervise and regulate the false democracy under capitalism.