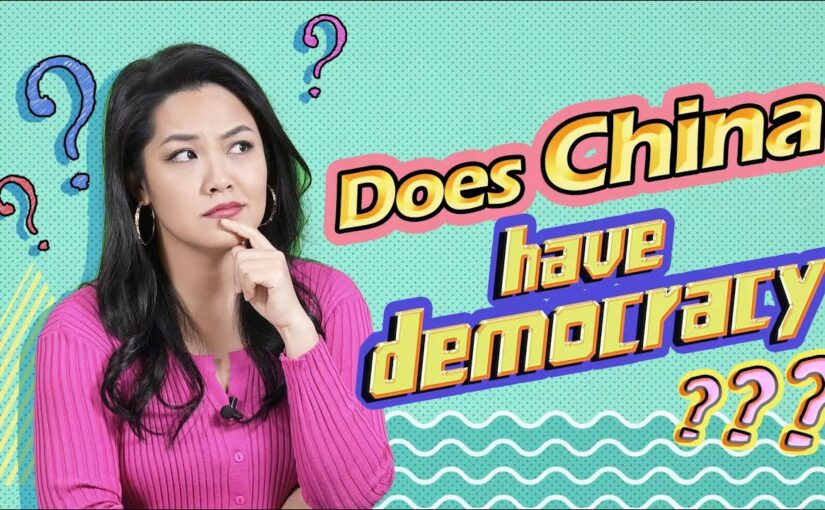 CGTN reporter Li Jingjing recently posted a presentation on YouTube explaining China’s political system and countering the standard narrative in the West that China is ‘authoritarian’ and ‘undemocratic’. The video is embedded below, along with the text, which Li Jingjing has kindly provided us with.

Yes, guys. I know a lot of you probably are very shocked right now, especially if you are from the West.

“No, there’s no way China is a democracy, it’s an authoritarian government that oppresses its people! As we were told by our governments and media!”

Ok ok, if it really oppresses its people, then how do you explain this:

According to the Edelman Trust Barometer in 2020, 82% of Chinese trust their government, ranked No.1 in the world, followed by India, Australia, Canada and Germany. And you see, this research was done in 2020, after China went through lockdowns and hit hard by COVID 19 pandemic in the first half of that year, the trust in government is still higher than any other countries. I’m sure that number got even higher after the economy and wellbeing of people got better in 2021.

If the government was oppressing its people, how could it have such high percentage of support and trust from the people? If it was so oppressive, why would the government bother to lift 800 million people out of extreme poverty?

Some of you probably already noticed that China issued a white paper explaining China’s democracy: The Whole-Process People’s Democracy. If you are interested, you can read it or you can just subscribe to my channel, because I’ll try to explain many things about China, including explaining China’s political systems

Democracy, in Chinese, is 民, 主

The first character means people, the second means the masters or the dominant role.

So it’s very simple, in China, democracy means people is at the center, everything, every policy are supposed to serve the people, improve the wellbeing of people. That’s why the full name of China is, People’s Republic of China, our government is called People’s Government, our military is called People’s Liberation Army.

If you have read the history of China, you’d know democracy has always been the core value of the Communist Party of China, or CPC, in short.

One of the main founders of the CPC, Chen Duxiu, was the earliest advocate for democracy in 1919. During the New Culture Movement, Chen promoted “democracy” and “science”, these two concepts from the much more developed Western countries back then. Democracy and Science were even being referred to as “Mr. Democracy” and “Mr. Science” by Chinese at that time, because they think they are the two great teachers from the West.

Chinese embraced the idea of democracy and enlightened by that and eventually that led to people stood up for themselves and overthrew the monarchy, feudal government, Qing Dynasty, and also fought with the foreign imperialists.

But China didn’t just blindly took the Western democracy. Not considering the unique historical, cultural conditions and just blindly adopt someone else’s political system won’t work for any country. Just take a look at what happened to former Soviet Union after it took democracy overnight, or Arab countries after the Arab Spring. None of that worked well.

Actually, China tried different systems in the history, constitutional government, capitalism, multi-party system, all ended terribly. Only socialism worked in the end. I can make another video about that part of history. But in this video, I want to focus on what’s China’s system like, and how it could solve problems for 1.4 billion people.

To understand how does China make sure people’s voice could be heard, how the government response to people’s demands, you need to understand China’s fundamental political system, the National People’s Congress.

That’s the highest organ of state power. It has four main functions and powers: legislation, appointment and removal of officials, decision-making and supervision.

Each province, cities, counties and villages also have their local people’s congresses, and they are the local agencies of the state power.

Every year, people’s congresses are first held from the grassroots upwards at township, county, city, and provincial levels and then at the highest national level, That’s why every year around March, you would see deputies from all corners of China go to Beijing for the National People’s Congress at the Great Hall of the People.

The deputies to people’s congresses are literally coming from all backgrounds, all regions, all ethnic groups, sectors and social groups.

I have a figure for you here.

At the end of 2020, 2.6 million people were serving as deputies to people’s congresses at all levels nationwide. Among them, those at county and township levels accounted for 94.5 percent of the total.

You see, these people, these 94 percent at the grassroots level have the closest connections with grass-root people, they know what grass-root people need, their problems, and these deputies solicit and submit people’s suggestions and advice, to take full cognizance of the people’s aspirations and report them to upper levels.

Many of the motions and proposals put forward by deputies have been carefully reviewed and then included into policy decisions of state organs.

During the political season in March, people would mention the word “Two Sessions”, the National People’s Congress is one of the sessions.

The other is Chinese People’s Political Consultative Conference. And that’s what I’m going to talk about next, a distinctive feature, and probably the strength of China’s socialist democracy – problems are solved through consultation.

The system of multiparty cooperation and political consultation under the leadership of the CPC is a basic element of China’s political framework.

In China, there are no opposition parties. But China’s political party system is not a system of one-party rule. It’s also not one in which multiple parties compete for power and govern in turn. It is a multiparty cooperation system in which the CPC is the governing party, and there are also eight other political parties function as its advisors and assistants. Through forums, talks, and written documents and many other forms of consultation, the CPC consults with the other parties and prominent individuals without affiliation to any political party (non-affiliates) on major national and local policies and matters.

The Chinese People’s Political Consultative Conference (CPPCC) serves as a key element of the multiparty mechanism. It is a key component of the state governance system, and a distinctively Chinese political institution.

So this is the two fundamental part of China’s political system. There are a lot more to explain China’s Whole-Process People’s Democracy.

But I think I’ll stop here to make this video simple easier. If you like it, let me know by clicking a like, leaving a comment, and I’ll continue to make sure explaining China’s system.

One thought on “Li Jingjing: Does China have democracy?”