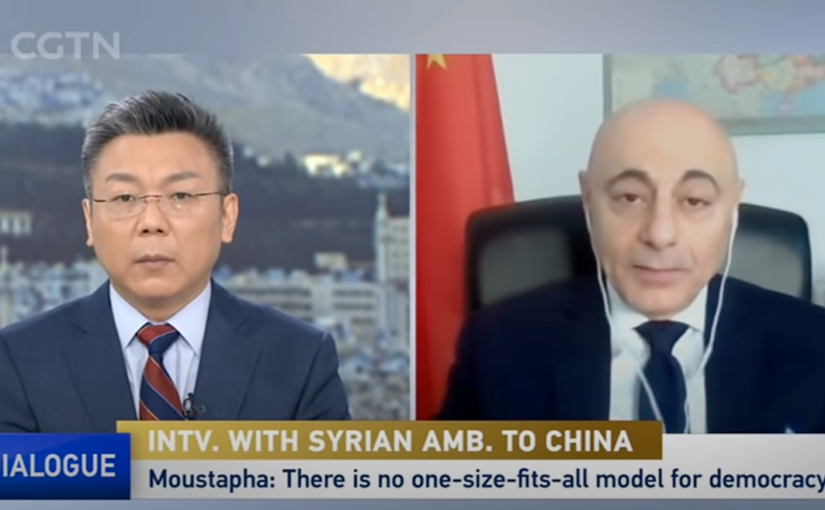 We are very pleased to make available this edition of CGTN’s Dialogue, in which Xu Qinduo conducts an extensive interview with His Excellency Imad Moustapha, Ambassador of the Syrian Arab Republic to China, in the year that sees the 66th anniversary of diplomatic relations between the two countries as well as the 11th year since the outbreak of the imperialist-inspired crisis in Syria.

In this wide-ranging dialogue, Ambassador Moustapha highlights the difference between China’s whole process people’s democracy and the type of democracy that exists in the United States and other major capitalist countries. The former, he explains, is from the people and for the people, whilst the latter is for the 1% and by the 1%. This in turn, he continues, has its roots in the USA’s origins in the genocide of Native Americans, its development through chattel slavery and its sustenance through continuous wars of aggression.

China’s challenge to the United States, according to the Ambassador, arises not simply from its economic achievements, but also because the success of the Communist Party of China belies the US assertion that theirs is the only political system that works. Thanks to China’s achievements, other countries now have choices – something that is reinforced by the Belt and Road Initiative (BRI), which stands for shared prosperity and mutual benefit.

According to the Ambassador, his country’s relations with China are “far beyond warm”.  And he compares this to the US occupation of his country’s oil fields and the harsh sanctions that particularly target the poorest and weakest members of Syrian society. All small countries in the world, the Ambassador concludes, are very happy with China’s progress, as a unipolar world dominated by the United States has caused them so much suffering.

2 thoughts on “Syrian ambassador: China’s progress is a threat to US domination”