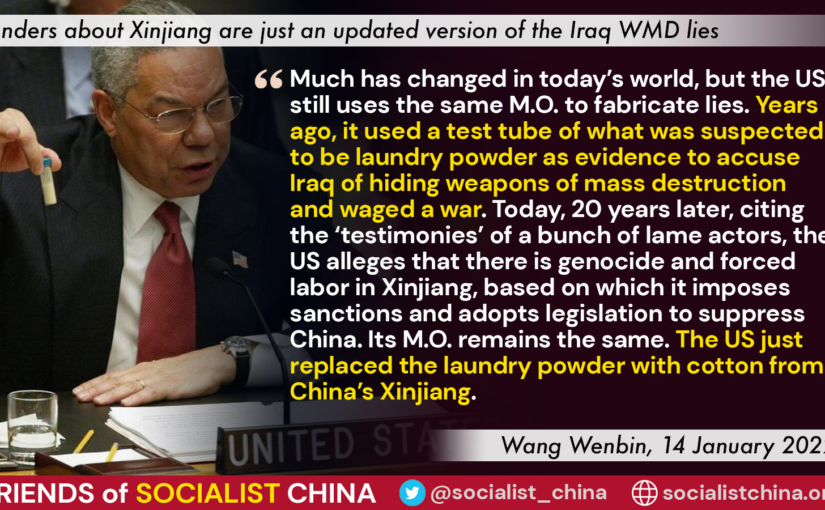 At the Ministry of Foreign Affairs press conference of 14 January 2022, spokesperson Wang Wenbin gave a detailed response to a question from CGTN about recent US legislation penalizing China for alleged human rights abuses against the Uyghur population in Xinjiang. Wang Wenbin’s response is reproduced below.

For some time now, US politicians, in collusion with some anti-China organizations and individuals, have been unscrupulously spreading and hyping up the lie of “genocide” and “forced labor” in Xinjiang for their ulterior political purpose. Today, I would like to take some time to share with you my experience of debunking lies on Xinjiang and avoid being misled so that you can all see the true face of those who fabricated those lies.

First of all, those who fabricate lies on Xinjiang always camouflage themselves with three cloaks.

The first is the cloak of academic research. They spread rumors in the name of scholars and academic institutions. A typical example is Adrian Zenz. His claim that “900,000 to 1,800,000 people have been systematically held in detention in Xinjiang” comes from a groundless report by Istiqlal TV, a Turkey-based media organization with close ties with extremists. Abdulkadir Yapuquan, leader of the East Turkistan Islamic Movement (ETIM), a UN listed terrorist organization, is a regular guest of it. Zenz also claimed that 70 percent of the cotton plantations in Xinjiang in 2019 were harvested by human labor. But fact tells a completely different story: 85 percent of the cotton in Xinjiang is harvested by machine. These facts have proved that Adrian Zenz, a so-called “China expert”, is just a pseudo scholar with no academic integrity at all.

Another case in point is the Australian Strategic Policy Institute (ASPI). The “findings” published by ASPI and its research fellows have repeatedly been proven to be disinformation. In September 2020, ASPI produced a Xinjiang-related report claiming that researchers had identified and mapped more than 380 “suspected detention facilities” in Xinjiang using satellite imagery. However, at least 343 of the locations are proven to be public or civil facilities such as schools, hospitals, houses and shops. In another report of ASPI titled “Uyghurs for Sale: ‘Re-education’, forced labour and surveillance beyond Xinjiang” published in March 2020, over 100 notes cite reports by Chinese media, but without using the original words or reflecting the authentic meaning. It is more appropriate to define ASPI as a rumormonger, rather than a research institute.

The second is the cloak of victims. They concoct lies by playing the victim or witness. Such fake witnesses abound. We once exposed how Zumrat Dawut and Tursunay Ziawudun lied. Today, I want to give you another example named Sayragul Sauytbay. She sometimes calls herself a teacher at a vocational training center, and sometimes a “victim” of the “detention center”. She claims to have witnessed “torture” and “violence” at vocational training centers on one occasion, but insisted that she has never seen any acts of violence on the other. She says the “detainees” were forced to have pork, but asserts that there was no meat at all in another context. In fact, this person has never learned or worked in vocational training centers, but is wanted by the public security authorities for suspected crimes of illegal border-crossing and loan fraud. The so-called “testimonies” of these individuals contradict themselves and cannot justify anything, only to reveal that the people are not victims or witnesses, but third-stringer actors that give themselves away while changing their playbooks.

The third is the cloak of law. The so-called “Uyghur Tribunal” stands out in peddling lies under the legal pretext. This “tribunal” has nothing to do with the law, but engages in anti-China manipulation with a deceptive name. The “Chair” Geoffrey Nice reportedly used to be a British agent, who spends his life mainly making up false accusations to serve the US’ and the UK’s geopolitical purposes. Those who showed up as “witnesses” were familiar faces including Sayragul Sauytbay and Tursunay Ziyawudun. The so-called “research outcomes” cited there were fabricated by individuals like Adrian Zenz and institutions like the Australian Strategic Policy Institute (ASPI). The 28 Xinjiang-related false testimonies given at the “tribunal” were all rebuked by the relatives and colleagues of the so-called “witnesses”, as well as independent media in the world.

No matter what cloak the liars may wear, their disguise is no different from the “emperor’s new clothes” in the face of facts and truth. We believe you would not be easily hoodwinked when you encounter lies about Xinjiang including “forced labor” and “genocide” again.

Second, those who make up Xinjiang-related lies seem to be independent from each other, but are in reality closely related as they are prompted and manipulated by the same force behind the scene.

For example, Tursunay Ziyawudun had received several interviews of foreign media outlets before arriving in the US, where she did not mention once that she was a victim of abuse. But she immediately changed her stories after she set foot in the US and received some “training” by certain forces. After fleeing overseas, Sayragul Sauytbay colluded with “East Turkistan” organizations sponsored by the US, was awarded by the US Department of State, and was even showered with Pompeo’s praise.

Adrian Zenz works at the “Victims of Communism Memorial Foundation”, an anti-China organization launched and manipulated by the US intelligence community, and the Jamestown Foundation. He’s also a key member of a research group set up by the US intelligence community on vocational education and training centers in Xinjiang. Right after the US House of Representatives adopted the “Uyghur Human Rights Policy Act” in 2019, Adrian Zenz took a victory lap of sorts to celebrate the passage of the Act while testifying before the House Foreign Affairs Committee and used the occasion to call for opening up a new front against China and starting an investigation into “involuntary labor in relation to Xinjiang”.

The top funder of the “Uyghur Tribunal” is the “World Uyghur Congress”, an anti-China terrorist organization advocating the secession of Xinjiang that has been supported by the National Endowment for Democracy (NED) since the day it was founded. Since 2004, the NED has provided $8.76 million in funding to overseas Uyghur organizations.

As for ASPI, it is an organization funded by the US Department of State, NATO and some arms dealers. Its two biggest funding payments from overseas government agencies are both from the US Department of State. After this institute released its report on “forced labor” in Xinjiang in March 2020, some US lawmakers began to clamor for banning imports from Xinjiang, and introduced the “Uyghur Forced Labor Prevention Act”, which was later signed into law.

It is not difficult to see that the real fabricators and “beneficiaries” of Xinjiang-related lies are some anti-China forces in the US. Lawrence Wilkerson, a former senior US official, stated unabashedly back in 2018 that the US “would want to destabilize China and that would be the best way to do it to foment unrest and to join with those Uyghurs in pushing the Han Chinese in Beijing from internal places rather than external”. It is just part of the “use Xinjiang to contain China” strategy of the anti-China forces in the US to weave Xinjiang-related lies, tarnish China’s image, and destabilize Xinjiang to suppress and contain China’s development.

Third, much has changed in today’s world, but the US still uses the same M.O. to fabricate lies. Years ago, it used a test tube of what was suspected to be laundry powder as evidence to accuse Iraq of hiding weapons of mass destruction and waged a war. Today, 20 years later, citing the “testimonies” of a bunch of lame actors, the US alleged that there is “genocide” and “forced labor” in Xinjiang, based on which it imposed sanctions and adopted legislation to suppress China. Its M.O. remains the same. It just replaced the white powder with cotton from China’s Xinjiang.

However, new progress in our world today also brings with it a more discerning eye. The Xinjiang-related lies concocted by anti-China forces in the US cannot undermine the stability, unity, harmonious development, and wellbeing in Xinjiang or silence the just voice of the international community showing support for China. They will only further expose the true face of liars and conspirators in front of the whole world.

The sun will shine through the dark clouds and people will just admire the clear blue sky even more. Anti-China forces’ desperate attempts to smear and suppress China failed in the past and will never succeed in the future. The fabricator of the “lie of the century” will be nailed to the historical pillar of ignominy.