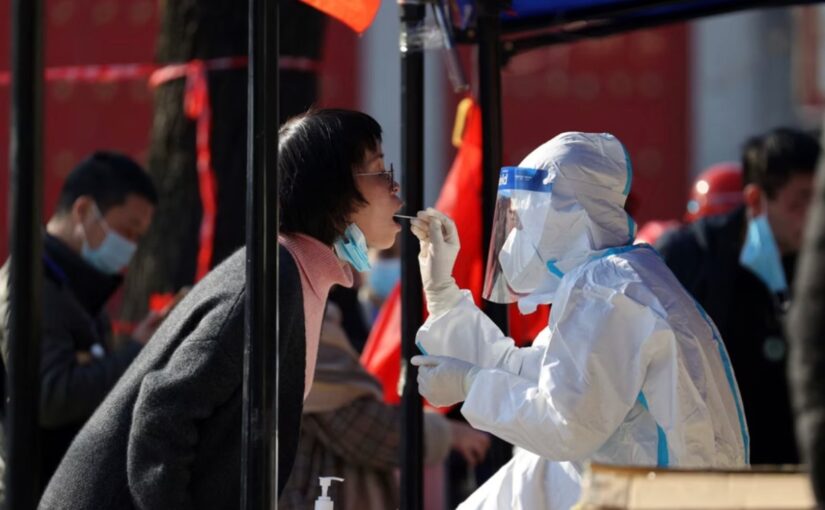 In the infamous words of Joseph Goebbels, Hitler’s propaganda chief: “If you tell a lie big enough and keep repeating it, people will eventually come to believe it.”

It would seem that this maxim has been taken to heart by the editors of the New York Times. Every day, this dependable mouthpiece of the US ruling class pumps out a steady diet of increasingly deranged anti-China articles. However, on 13th January, they excelled themselves with a new low – a front page story despicably comparing the public health and medical personnel, who have been bravely fighting an outbreak of Covid in the Chinese city of Xian, to Adolf Eichmann, a key architect of the Holocaust.

We are pleased to publish this excellent and succinct rebuttal of this ‘big lie’ by John Walsh, originally carried by Asia Times. John was until recently a professor at the University of Massachusetts Medical School in the US.

In a article on the front page of The New York Times on January 13, reporter Li Yuan equated the public health and medical personnel behind China’s successful battle against Covid-19 in the city of Xian to Adolf Eichmann, a principal architect of the Holocaust. The article’s opening sentence views these personnel as typical of “the millions of people who work diligently toward” containing Covid-19 in China.

The anti-Covid campaign in Xian, a city of 13 million, has terminated the spread of Covid-19 without a single death and limited its spread to about 2,000 cases. The Nazi Holocaust designed and managed by Eichmann resulted in the extermination of millions of Jews.

The piece takes aim at the millions of Chinese who have worked tirelessly to do the rapid mass testing, tracing, quarantining and vaccinations and to staffing the lockdowns including ensuring that those under lockdown were supplied with necessities of life.

As a result of their work China has reported about 100,000 cases Covid-19 and fewer than 5,000 deaths. The mortality count has been verified by a count of excess deaths in a peer-reviewed article by a team from Oxford University and the Chinese Center for Disease Control and Prevention (CDC) in the prestigious British Medical Journal; it is summarized here for the layman.

Peter Hessler, who was living and teaching in Chengdu, Sichuan, during the first of the lockdowns, described these workers as follows in a New Yorker piece in March 2020:

“When I asked if there had been much resistance to the new policies, he [the Communist Party official in charge of the lockdown in Hessler’s neighborhood in Chengdu] shook his head. ‘Ninety percent of the population agrees,’ he said. ‘We have some people who think it’s not convenient, and they want to go out and play mah-jongg or something. But most people follow the rules.’

“From what I had seen, he wasn’t exaggerating. The overwhelming compliance was one of the most impressive features of the lockdown, along with the dedication of grassroots officials. In Wuhan, the government had sent 1,800 teams of epidemiologists, each consisting of at least five people, to trace the contacts of infected citizens. The WHO report noted that the containment effort had been possible because of ‘the deep commitment of the Chinese people to collective action.’” (Emphasis added.)

Contrast that with this from Wikipedia’s entry on Eichmann:

“Eichmann and his staff became responsible for Jewish deportations to extermination camps, where the victims were gassed. Germany invaded Hungary in March 1944, and Eichmann oversaw the deportation of much of the Jewish population. Most of the victims were sent to Auschwitz concentration camp, where about 75% were murdered upon arrival.

“By the time the transports were stopped in July 1944, 437,000 of Hungary’s 725,000 Jews had been killed. Dieter Wisliceny testified at Nuremberg that Eichmann told him he would ‘leap laughing into the grave because the feeling that he had 5 million people on his conscience would be for him a source of extraordinary satisfaction.’”

How can the NYT’s Li Yuan equate the two? The polemic used to justify the equation deserves examination, because it demonstrates how the paper’s construction of the narrative of the day often works.

The tone and target are set by the online headline, which reads ominously, “The Army of Millions Who Enforce China’s Zero-Covid Policy, at All Costs.” (Emphasis added.) Later the case for the Eichmann equation begins as follows:

“The government has the help of a vast army of community workers who carry out the policy [of dynamic zero Covid] with zeal…. The tragedies in Xian have prompted some Chinese people to question how those enforcing the quarantine rules can behave like this.”

What are these tragedies? The author comes up with three presented near the very beginning of the piece.

First was a man with chest pains whose hospital admission was delayed by six hours and later died of a heart attack; the bureaucratic delay related to his living in a medium-risk district.

Second, a pregnant woman whose admission was also delayed because her Covid test appeared invalid; after admission she miscarried.

Third, a young man who was violating a curfew and got into an altercation with security guards.

Certainly, each of the first two these events is a tragic and unacceptable error. The third is hard to judge – if it is true. But in a city of many millions threatened with a deadly outbreak of the Delta variant of Covid, there were bound to be some mistakes. And if these are the worst of them, then it would seem that praise should be heaped on Xian’s hospital and public health workers.

Nevertheless, the first two of these incidents caused an outcry far and wide over the Internet, leading officials to take action. (Note that the disclosure and widespread discussion online belie the idea that there is no opening for criticism in China.)

The mass complaints led to the temporary closure of the hospitals to examine their procedures and ultimately to the punishing of those in charge. A national declaration made it clear that no patient was to be turned away from a hospital under any circumstances.

Building on these three anecdotes and neglecting any context up to this point, reporter Li continues:

“‘The banality of evil’ is a concept Chinese intellectuals often invoke in moments like Xian. It was coined by the philosopher Hannah Arendt, who wrote that Adolf Eichmann, one of the chief architects of the Holocaust, was an ordinary man who was motivated by ‘an extraordinary diligence in looking out for his personal advancement.’

“Chinese intellectuals are struck by how many officials and civilians – often driven by professional ambition or obedience – are willing to be the enablers of authoritarian policies.”

Who are these unnamed “intellectuals”? That is not clear. Certainly, there are a good many Chinese intellectuals in the country and abroad who are proud of China’s handling of the pandemic.

In summary, the anatomy of the article is a headline, then a cherry-picked set of anecdotes to set the tone. It is important that this mood be set as arrestingly and strikingly as possible. The most outrageous exceptions to the rule must be presented as though they are the norm. Finally based on these anecdotes, far-fetched conclusions are drawn based on the assumption that the anecdotes are representative.

Later on, buried deep in the article some context may be slipped in as a way to cover the writer’s derriere. Noam Chomsky many years ago suggested reading the NYT’s articles beginning with the end, since that is where the real information may lie. Often, any such qualifications are left out, resulting in a giant lie of omission.

That is how it is done.

There is a bright spot, however. Many if not most of the comments posted online, at least at the time of my reading, found Li’s polemic to be baseless, even downright absurd. Americans are not so easily deceived as the NYT editors may think. This is heartening, because the daily demonization of China in the US mass media, relentlessly and prominently so in the NYT, is a prelude to conflict and war.

As author Caitlin Johnstone tells us, “Before they drop the bombs, they drop the narrative.” The NYT is carpet-bombing us Americans with an anti-China narrative these days.

One must ask in the end, what is the animus that drives this anti-China diatribe? Is it fear of the loss of the US role as global hegemon? Is it the self-righteousness and arrogance of the Exceptionalists? Or is it simply careerism in the service of an evil agenda, the very thing Hannah Arendt deplored?