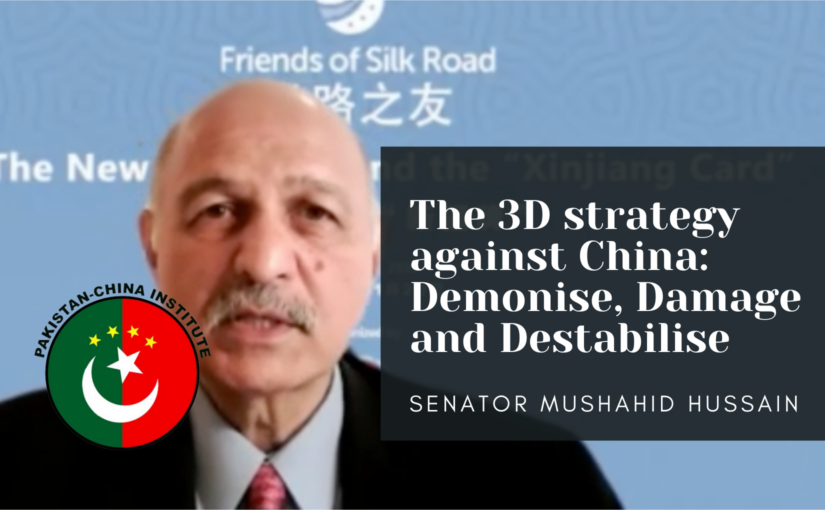 Speaking at a webinar held on 20 January 2022 by the Islamabad-based think-tank Pakistan-China Institute, Senator Mushahid Hussain, chairman of the Pakistani Senate’s Defense Committee, discusses the motivation and methods of the US-led New Cold War against China. Addressing the Xinjiang situation, Senator Hussain describes the US strategy as being to “demonise, damage and destabilise” in order to put a stop to China’s peaceful rise.

Below the video, we reproduce a report of the event that appeared in Pakistan Today.

Pakistan-China Institute (PCI) organized a first-of-its-kind webinar on the “New Cold War about playing the Xinjiang card against China” under its flagship event series, “Friends of Silk Road (FOSR)”.

The dialogue was moderated by Mustafa Hyder Sayed, Executive Director of the Pakistan-China Institute. Mr. Mustafa Hyder Sayed highlighted that the US has weaponized human rights and is engaged in the selective application of human rights principles. He emphasized that Pakistan should continue to support China on Xinjiang since China has always supported Pakistan on its core interests.

The panelists discussed how the ‘Xinjiang card’ is used by the Western world, particularly the United States, to achieve their foreign policy objectives of pressuring China. The speakers stressed that laws such as the ‘Uyghur forced labor bill’, and other legislation and policies concerning Hong Kong, Taiwan, and Tibet, are part of a larger ‘China containment’ policy.

Dr. Ejaz Akram stated that issue of Xinjiang is a flashpoint, which is used by Western groups to rally certain parts of the Muslim world against China. He mentioned that the CIA has a history of blackmailing countries into submission via color revolutions, similar to what they did in countries like Syria, Libya. He emphasized that Pakistan is in a twilight zone between US and China. He advised the Government to support China in its quest for truth, in its quest of protecting its interests and in protecting the region.

A brief video was played which discussed how the US took a politically-motivated decision to remove the East Turkestan Islamic Movement (ETIM), which is recognized as a terror outfit by the United Nations, from its’ list of terror groups. It discussed the double-standards on the part of the US to demonize China, despite being at war in the Muslim world for a couple of decades.

Dr. Shireen Mazari, the Federal Minister for Human Rights, stated that the United States is involved in starting a New Cold War with China, in the midst of the COVID-19 pandemic, which requires greater international cooperation. She asserted that the United States has created laws, such as the Uyghur Forced Labor Prevention Act, to sanction China using the ‘Xinjiang card’. She questioned why the United States failed to take action against the genocide of innocent Kashmiris by the Indian occupation forces. She asked why the US failed to speak out against the elimination of Palestinians from their homeland by the Israeli regime. She emphasized that the US is losing power internationally due to its imperialist approach. It also created the military alliance, AUKUS, centered on countering China in the Asia-Pacific region. Efforts to combat China in South Asia include massive military hardware influx and military cooperation. She pointed out that the US is seeking a New Cold War and trying to militarize global politics as well as economics, whereas China strives to share economic prosperity and open up the world through trade routes and infrastructure in Pakistan and African countries, so that all countries can prosper via international trade. Pakistan faces a challenge of whether it will move towards economic prosperity, which is now a central norm of Pakistan’s National Security policy, or whether it will be sucked into the militarization being pushed by the United States. The rational route is to support the opening up of the world through international trade via the Silk Route, BRI and CPEC project. Dr. Shireen concluded that Muslims have suffered the consequences of the US War on Terror and of militarization and they cannot afford to go down this route.

Professor Li Xinguang discussed that the West fears the unity between the Confucian and Islamic Civilisations. He highlighted that the West’s purpose to play the ‘Xinjiang card’ is to divide and undermine China and create misunderstandings between China and neighboring Muslim countries, as well as those along the Belt and Road. The West wants to turn Xinjiang into another Afghanistan. He stressed that, unlike the United States, who despite failing in the battlefield does not want to see unity among Afghans, China respects the culture and religion of the Afghan people.

Allama Tahir Ashrafi, Special Assistant to the Prime Minister on Religious Affairs stated that bills or statements made by the United States regarding lack of religious freedom in Pakistan, China, and Saudi Arabia are baseless. He suggested that these statements are politically motivated, rather than fact based. He stressed that the United States should avoid interfering in the internal affairs of other countries and avoid needlessly criticising China on Xinjiang. He emphasized that the United States should focus on human rights violations in its own country, then preach to other countries. He highlighted that interference by the United States in internal matters of countries has led to disaster. He advised the US should rely on facts and engage in dialogue instead of using a narrative of a lack of religious freedom as a political weapon. He emphasized that the stance of the Pakistani people, government, and religious parties regarding China is that it is Pakistan’s best friend and neighbor, irrespective of American propaganda.

Ms. Saba Aslam discussed that in international politics, the Western world, which has a colonial mindset, uses narratives and sanctions to demonize others. She stressed that the US always imposes unilateral sanctions, which is seen as more effective tool. She predicted that the China and US won’t engage in military conflict since they will fight on an economic level. She added that China isn’t a weak state, they are immune to US sanctions as the US will fail to achieve its objectives by applying sanctions and pressure. Ms. Aslam suggested that China should come up with proactive measures to combat these myths and disinformation through research gaps.

Senator Mushahid Hussain Sayed stated that political and economic power in the world is shifting from the West to the East. He agreed with Professor Jeffery Sachs who believes that the US has not been able to compete with China economically. He cited a study by Professor Graham Allison of Harvard University that China has displaced the US as the world’s biggest hi-tech manufacturer. He linked this with a recent report that China registered a growth of 8 percent in 2021, despite the COVID-19 pandemic. He highlighted that despite their opposition to the Belt and Road Initiative, the US launched its own copycat project, Built Back Better World. He cited an article by Leslie H. Gelb in The New York Times titled ‘Breaking China Apart’, which stated that the US will ‘kindle separatism in China’ if it doesn’t fall in line and discussed the approach of Demonizing, Damaging and Destabilizing countries. He highlighted a July 2020 survey by the Ash Center of Harvard University which found that over 90 percent Chinese support the Communist Party of China, since it has provided the Chinese people with stability, continuity, peace, and stability. Senator Mushahid Hussain concluded that while the US is engaged in creating cleavages, conflict and encouraging confrontation, Pakistan will continue to support China on its core national interests such as Xinjiang, Taiwan, Tibet, Hong Kong, South China Sea, and BRI.

This webinar lasted for 90 minutes. The speeches were followed by comments from two participants. Ambassador Masood Khalid commented that the West aims to release domino effect in those regions of China, such as Xinjiang, which it perceives as vulnerable. He noted that if Xinjiang is destabilized it will threaten CPEC and the BRI. He cited an article by Tom Freedman in the New York Times, who had predicted the collapse of China 20 years back, only to publicly acknowledge his mistake later. Moreover, Gerald Mbanda from Rwanda presented the African perspective and the experience of Africa with colonialism. He contrasted this with China’s friendship with and investment in African countries to enable their development. A diverse audience of students, scholars, and the media took an active part in this webinar.