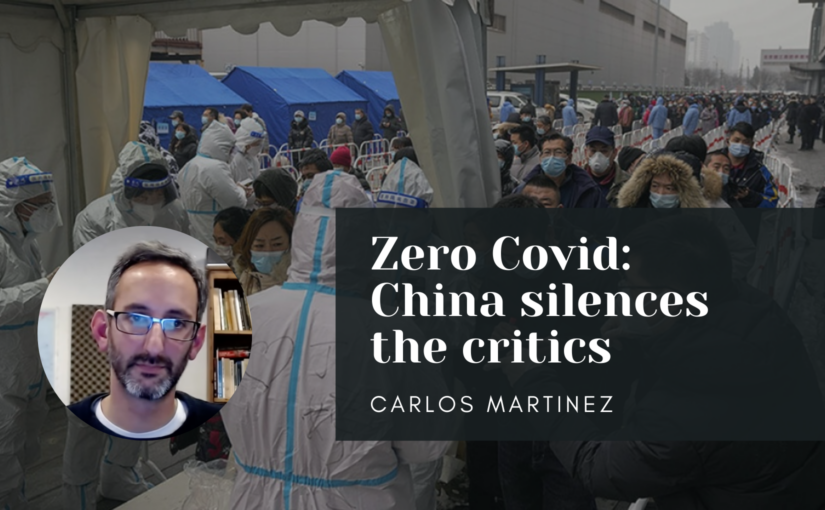 This article by Carlos Martinez, originally published in the Morning Star on 24 January 2022, discusses the recent Covid-19 outbreaks and containment measures in the major Chinese cities of Xi’an and Tianjin. The article addresses the flurry of criticism that has appeared in the Western mainstream media in relation to China’s Zero Covid strategy, and concludes that this criticism is designed specifically to demobilise progressive opinion around developing a people-oriented approach to suppressing the pandemic in the West.

It’s coming up to a year since the last death from Covid in China. Since 26 January 2021, China’s Covid death count has been stuck on 4,636. The vast majority – 99.9 percent – of these deaths took place during the first three months of the pandemic, and the most were in Hubei, the province in which the outbreak was first detected. In the southern province of Guangdong, population 125 million, there have been just eight deaths from Covid.

This extraordinary record has been achieved through strict adherence to a Zero Covid policy. Traditional epidemic containment measures – lockdowns, mass testing, social distancing, mask-wearing, hand-washing – have been combined with advanced technology such as AI-based outbreak modelling. In addition, China developed some of the first vaccines, and so far just under 90 percent of the population has received at least two doses.

Since the initial outbreak in Wuhan, the health authorities in China have quickly and successfully contained a number of much smaller outbreaks via mass testing, travel restrictions, and short, targeted lockdowns. However, in late December, an outbreak started in the Western city of Xi’an that threatened to get out of control, with daily confirmed cases rising to a peak of 175 on 27 December. We should note in passing that this peak of 175 prompted a much more vigorous response than Britain’s recent peak of 218,376 cases.

To prevent transmission getting out of control and spreading beyond Xi’an, the city’s health authorities took decisive action, imposing a strict city-wide lockdown on 22 December and organising multiple rounds of mass nucleic acid testing.

With 13 million people unable to leave their homes, this was the most extreme set of containment measures in China since the Wuhan lockdown in early 2020. Public transport was shut down, schooling was moved online, and all non-essential businesses were closed.

The local authorities acted to ensure sufficient supplies of grain, oil, vegetables and other staple commodities, and regulators worked to prevent speculation and price gouging. Community workers made contact with every household to ensure people’s nutritional and medical needs were being met, and the city’s health administration established ten medical teams and a 24-hour hotline to help vulnerable and elderly people. Teams of government employees and volunteers delivered millions of boxes of vegetables to residents.

There were unquestionably some mistakes and problems connected with both the outbreak and the containment measures. China’s central government has criticised the local health authorities for responding too slowly to the initial outbreak and for not properly adhering to the national containment protocol. It’s becoming clear that, in applying a Zero Covid strategy, the first 24 hours of an outbreak are critical in terms of setting up mass testing, quarantining patients, and carrying out contact tracing. The faster the response, the better.

One tragic incident that hit the headlines both in China and the West was when staff at Gaoxin Xi’an Hospital turned away a heavily pregnant woman when she was unable to provide evidence of a negative Covid test; she miscarried soon after. Facing widespread anger, the hospital issued a public apology and Vice Mayor Xu Mingfei confirmed that all hospitals were required to set up “green lanes” for pregnant women, critically ill patients, and anyone undergoing dialysis, radiotherapy or chemotherapy.

Problems notwithstanding, the Xi’an lockdown has been a success. Within three weeks, community transmission had effectively ended and restrictions were being gradually lifted. Thousands of lives were saved and the outbreak was prevented from spilling out into neighbouring provinces.

In early January, the ultra-contagious Omicron variant made its first appearance in China, in the port city of Tianjin – just half an hour by high-speed rail from Beijing, where the Winter Olympics are due to start in two weeks’ time. The local authorities immediately started mass-testing the city’s 14 million residents, even mandating a half-day holiday so that people could get tested.

Lockdown measures have so far been limited to Jinnan District in the southern part of the city, home to just over half a million people. At the time of writing, the Tianjin outbreak appears to be basically under control.

Crescendo of criticism of Zero Covid

Writing in The Guardian of 5 January, Helen Davidson concedes that there is in China “generally broad support for authorities’ swift response to outbreaks”; that is, the Chinese people largely accept that the positives of Zero Covid – saving millions of lives – outweigh the negatives. Nevertheless, she insists that the strict containment measures are “taking their toll on the population.”

This is just one of a barrage of articles in the Western press over the last few weeks questioning China’s approach to the pandemic. Alexandra Stevenson in the New York Times gave voice to those who feel that “the pain, suffering and confusion caused by the lockdown has made Beijing’s virus strategy appear increasingly unsustainable.” The author asks whether China can really continue to leverage these “authoritarian virus-fighting methods”.

As Zhong Nanshan, one of the China’s best-known epidemiologists and an architect of its suppression strategy, commented in November: “The cost of implementing the current strategy is quite high, indeed. But if you ignore it and just let go of the situation, the cost will be even higher.”

With 18 percent of the global population, China has suffered less than 0.1 percent of all deaths due to Covid since the start of the pandemic. If China’s Covid death rate were the same as the US’s, its pandemic body count would currently stand at 3.7 million rather than 4,636.

Using death rate as a measure of comparing containment strategies, China has performed almost a thousand times better than the US and Britain. And yet the Western press wonders about whether China’s policy is “sustainable”? This appears to be a case of adding 2 and 2 together and getting 3.7 million.

At no point since the lifting of the Wuhan lockdown in Spring 2020 has China had more than 1 percent of its population locked down. Its rapid response to every outbreak has meant that, in addition to saving millions of lives, the vast majority of people in China have been able to live normally. Economic growth, poverty alleviation, infrastructure construction and environmental protection have continued.

All this feels significantly less “authoritarian” than what those of us in Britain have had to endure, with our loved ones dying needlessly while we contend with a hopelessly confused and ineffective set of containment measures (while our national “leadership” is partying away in Downing Street).

For supposedly left-leaning media outlets such as the Guardian and New York Times to disparage China’s Zero Covid strategy means putting their basic class allegiance on display and actively demobilising progressive opinion on the question of how to contain the pandemic.

Britain is a wealthy country with significant resources. The British government could and should follow China’s example in suppressing Covid, but it won’t do so unless faced with extreme public pressure. The media could stimulate that public pressure by holding up China’s example; instead it only slanders China. Apparently the pursuit of New Cold War is a more pressing concern than stopping the pandemic.