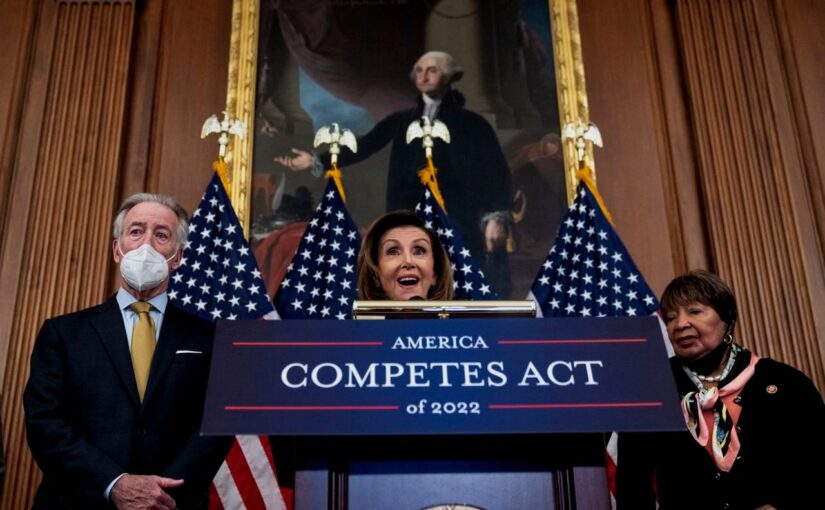 The following press release from Black Alliance for Peace, issued on 7 February 2022, correctly identifies the new ‘America COMPETES Act’ as a weapon of Cold War, aimed at strengthening US hegemony and subverting the rise of a democratic, multipolar world order.

February 7, 2022. On Friday evening, February 4th, the U.S. House of Representatives passed the America COMPETES Act of 2022 (H.R. 4521). The stated intent of the legislation is to strengthen “America’s national and economic security and the financial security of families, and advance our leadership in the world.” While this claim, found in Nancy Pelosi’s press statement on January 20th, seems to be addressing some of the most important political and economic issues currently plaguing the United States, from the supply chain to the shortage of semiconductors, the Black Alliance for Peace sees this piece of legislation as sinophobic and militaristic, and that only strengthens the imperialist designs of U.S. foreign policy.

The premise of the America COMPETES Act is that China is a dangerous economic rival that represents a national security threat, and a “malign influence,” BAP rejects that position and sees this legislation as an unnecessary and unjustified expenditure of the public’s resources that should be targeted instead toward addressing the human rights needs of the working class and poor in the U.S.

We believe that the Act continues the United States’ policy of militarism first and poor and working-class people last, manifested in the recent passage of the $780 billion “defense” bill while the Build Back Better bill–which would have provided some relief for the most oppressed and exploited sections of U.S. society–is moribund. The $1.7 trillion cost of Build Back Better was said to be the impediment to its passage.

However, the issue of cost was never raised in sending $200 million in deadly weapons to Ukraine in December on top of the $400 million the U.S. has already provided in 2021. The combined cost of the “defense” bill, aid to Ukraine, and the money allocated for the America COMPETES Act totals over a trillion dollars for war and aggression. The House, in passing the Act, has doubled down on the United States’ endless funding of aggression while putting an end to funding the public’s basic needs.

“As U.S. infrastructure and public services continue to collapse at an alarming rate, the Act cynically proposes to harness the Infrastructure Transaction and Assistance Network to impede the development of relationships between China and “partner countries” to shore up the United States’ geopolitical interests. In other words, the United States is not aiming to compete, but rather to continue its predation in areas of strategic import,” according to BAP Coordinating Committee Member, Erica Caines.

Included in the Act is Division D – Foreign Affairs Sec 30113 Supporting economic independence from the People’s Republic of China that explicitly states the United States’ intention to “counteract Chinese assistance and financing to foreign governments.” Jemima Pierre, coordinator of the BAP Haiti/Americas Committee, points out that “As the Global South increasingly moves toward multipolar alliances to combat Western domination, the America COMPETES Act represents a desperate attempt to regain control over Latin America via USAID initiatives that use the War on Drugs to position China’s “education and cultural diplomacy” as a dangerous imposition and to punish China for not cooperating with U.S. foreign policy objectives in Latin America and the Caribbean” (secs.30251, 30252).

The Black Alliance for Peace particularly opposes the latter as grounds for “economic and financial sanctions” on China and other countries that refuse to align with the United States in this area. Regarding Africa, the Act intends to monitor the impact of the Chinese “political, economic, sociocultural, and security sector” activity on the continent and its impact on U.S. strategic interests, with Director of National Intelligence (DNI) reports made directly to Congress (sec. 30271).

Given our demand to demilitarize what is referred to as the “Indo-Pacific,” the Black Alliance for Peace further denounces any and all belligerent legislation that might escalate tensions between the U.S. and China on the issue of Taiwan. The effort of the America COMPETES Act to “entrench U.S. economic diplomacy in the Indo-Pacific” and “bolster American leadership” threatens such escalation. This thinly veiled military pivot to Asia can only serve to heighten tensions and increase global instability.

With its aggressive posture and punitive aim, the America COMPETES Act directly contravenes the Black Alliance for Peace’s efforts to support the call for Latin America and the Caribbean to be recognized as a “Zone of Peace.” We categorically reject this combative approach and support regional and global cooperation between states and peoples to solve common global challenges. We condemn the continuation of hostility toward China in the America COMPETES Act in the paternalistic guise of protecting the interests of “developing” countries.