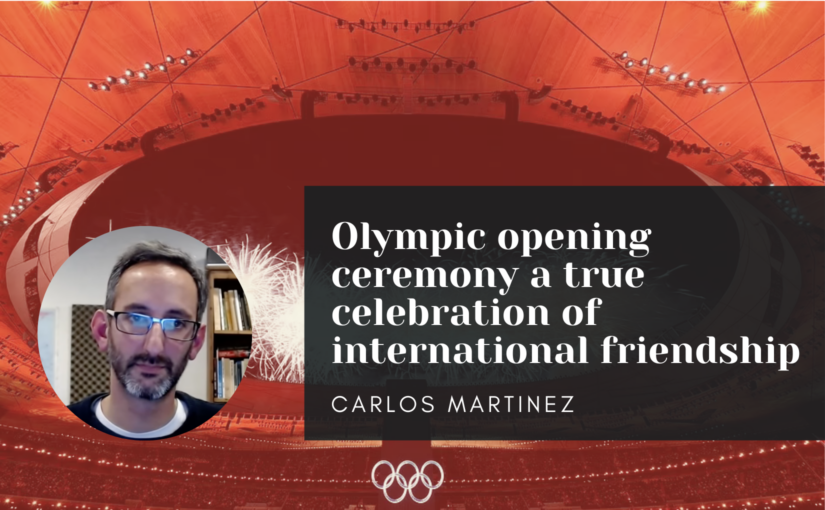 The following brief comment was submitted by Friends of Socialist China co-editor Carlos Martinez in response to a request from People’s Daily. It was quoted in a report in the Chinese edition on 5 February 2022.

The opening ceremony was spectacular and inspiring, a true celebration of international friendship and the Olympic spirit. Even in Britain and the US – countries that have imposed a so-called diplomatic boycott on these games – television commentators were obviously highly impressed with the technical and aesthetic excellence of the ceremony, as well as the overall atmosphere of excitement and solidarity.

It was fascinating to see the Bird’s Nest transformed from 2008. The stadium now seems perfectly suited to the Winter Olympics, and its reuse reminds us that the organisers have been very mindful of the need to make these Olympics the greenest in history, at a time when the global struggle against climate breakdown has become widely recognised as one of the most serious threats facing humanity. All the venues are powered exclusively by renewable energy and, of the seven venues, five are legacy venues that been repurposed for these games. Furthermore, the vehicles transporting participants, staff, officials and spectators run on zero- or low-carbon energy. Such innovations serve to showcase China’s increasing leadership on environmental issues.

The US and a small handful of its allies had wanted to politicise the games, to suppress the message of global cooperation and friendly competition that the Olympics represent. Looking at opening ceremony, it was clear they had failed. The national teams all represented their countries with dignity. Meanwhile, the heads of government of Russia, Pakistan, Argentina, Greece, Egypt, Cambodia and many other countries were in attendance – in spite of the travel difficulties posed by the ongoing pandemic.

That Beijing is the world’s first Dual Olympic City is an extraordinary accomplishment for a country that, at the time of the founding of the People’s Republic in 1949, was one of the poorest countries in the world. Just seven decades later, China has established itself as a responsible world power; it has eradicated extreme poverty; it has handled the Covid-19 pandemic better than any other country; it is on the cusp of becoming the world’s largest economy; and it is a global leader in science and technology. The Winter Olympics opening ceremony – innovative, beautiful and inspiring – reflects a confident and increasingly prosperous socialist China, carrying forward a spirit of internationalism, innovation, solidarity, friendship and peace.