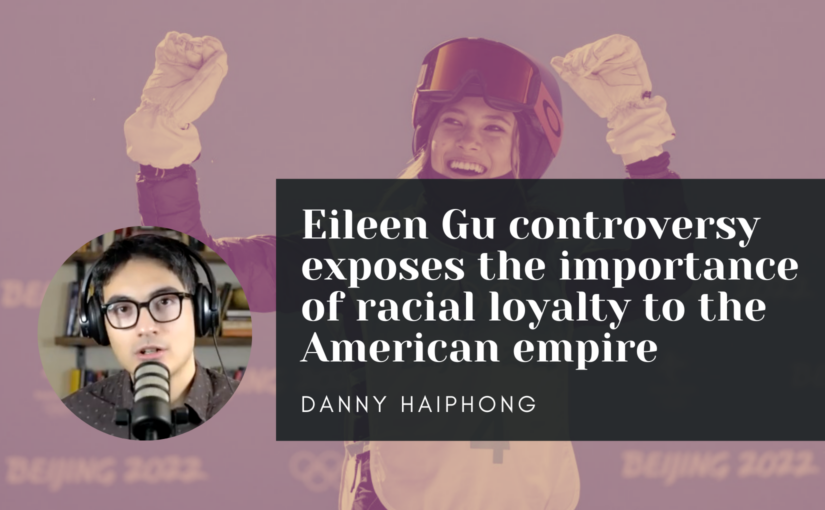 This article by Friends of Socialist China co-editor Danny Haiphong, originally published on The Chronicles of Haiphong, unpacks the hysteria surrounding the decision of the young Chinese-American ski champion Eileen Gu (Gu Ailing) to represent China rather than the US at the Winter Olympics. Danny explains how the intense hostility Gu’s decision has generated in the US has its origins in the New Cold War, American exceptionalism, imperialism, and white supremacy.

Eileen Gu is a world class skier who has already won her first gold medal in the Beijing 2022 Winter Olympics at the age of 18. Gu was raised in San Francisco by a mixed-race family. Her mom, who she posts about often on social media, is Chinese. In 2019, Gu announced that she planned to represent the Chinese national team for the Beijing 2022 Winter Olympic Games. But it is only within the last few weeks as the Winter Olympics prepared to launch that her decision began to stir a considerable amount of controversy. Gu has been labeled an ungrateful “traitor” to the United States for supposedly spurning the opportunities offered to her in the “land of the free.”

The vitriol directed at Gu has come from all corners of U.S. society. Former Olympic skier Jen Hudak told the media that Gu “became the athlete she is because she grew up in the United States, where she had access to premier training grounds and coaching that, as a female, she might not have had in China.” Popular right-wing talk show host Tucker Carlson claimed that Gu “renounced” her citizenship and betrayed her own country by choosing to ski for China.

A report in The Economist framed Gu’s decision as an agonizing moment for the teenage phenom who finds herself split between two countries engaged in a “superpower rivalry.” No evidence for this claim was provided in the article. Corporate media commentary has repeatedly emphasized that Gu was “born in the USA” while social media users on the far right have openly called for the Olympic skier to leave the country for her act of betrayal.

The intense reaction to Gu comes amid a tireless U.S. effort to delegitimize China in the lead up to the Beijing 2022 Winter Olympics. U.S. President Joe Biden announced a “diplomatic boycott” of the Games last December, a relatively meaningless gesture that saw more than dozen State Department officials apply for visas to travel to the Games shortly after the policy went into effect. A non-stop propaganda blitz helped pass the Uyghur Forced Labor Prevention Act a few weeks later. The bill effectively sanctions U.S. corporations from doing business in China’s Xinjiang Uyghur Autonomous Region by requiring proof that products imported from the region are not made from “forced labor.” These policy moves just skim the surface of the U.S.-led New Cold War on China and its many forms of aggression in the military, diplomatic, economic, and information realms.

As I penned in a previous column, fear is a critical component of the U.S.’s racist and imperialist attacks on China. House Speaker Nancy Pelosi summed up modern American fear of China when she warned U.S. athletes on the day of the opening ceremony not to speak out against China for fear that its “ruthless” government would seek reprisal. Pelosi’s characterization of China fits one side of casual racism’s double-edged sword. Fear of China’s supposedly unmatched ruthlessness is complimented by a ceaseless suspicion of China’s COVID-19 response, poverty alleviation program, and overall political and economic stability. China is all-powerful yet never successful; a menace to the “free world” but on a never-ending road to collapse.

The U.S.-led New Cold War is an imperialist project. At its core is a ceaseless effort to undermine and eventually overthrow China’s socialist economic and political system. More visible to the naked eye is the palpable fear expressed by Western capitalists of China’s economy surpassing the U.S. in GDP terms over the next half decade. War profiteers have benefitted immensely from the New Cold War. The U.S. military budget continues to grow, with special funds set aside for countering the so-called “China threat.”

Of course, the New Cold War is also a reflection of a long history of imperialist aggression toward China dating back to the Opium Wars of the mid-19th century. The Opium Wars carved up China and left the nation impoverished and weak. Western imperialists justified plunging China into a “century of humiliation” with Yellow Peril racism. The Chinese were routinely dehumanized and portrayed in Western media as sneaky thieves and rapists who deserved to be deported or worse. Yellow Peril justified the passage of racist immigration laws which increased the rate of exploitation and violently managed the flow of surplus labor migrating from China.

China and Chinese people were only useful to the West so long as they were weak and subservient. This all changed after the Chinese revolution of 1949 sent shockwaves throughout the Western capitalist world. U.S. officials lamented over “losing China” to communism. China was placed under sanctions from 1949-1971 by the United States and threatened with nuclear war more than once.

However, Cold War imperialist aggression was unsuccessful in destabilizing China. To paraphrase Mao Zedong, the Chinese people stood up in 1949 and are showing no signs of sitting back down to their former oppressors. China’s achievements in poverty alleviation, public health, renewable energy, high-technology, and a myriad of other fields have changed the course of history. A multipolar world is emerging where non-white, formerly colonized nations assert their self-determination in the midst of a declining imperialist order. China is leading the way.

Racial loyalty is an expression of both conscious and unconscious resentment toward these developments and plays a central role in the anger over Gu’s decision to represent China. To many in the United States, Gu has chosen the side of the “savages” and the “wretched of the earth.” She has rejected the United States as her white motherland. The overriding perception is that the U.S.’s superiority is as inherent as China’s supposed inferiority, making Gu’s decision a clear pledge of loyalty to a country inhabited by 1.4 billion non-white people and 90-plus million members of the Communist Party of China. In the eyes of her detractors, Eileen Gu is not just an ungrateful immigrant but an assault on American exceptionalism itself.

Such a view is entirely irrational once the blinders of racism are taken off. Gu is deeply connected to China on a personal and professional level. She is fluent in Mandarin and spends most summers in Beijing visiting loved ones. Gu is a Chinese citizen and has several Chinese sponsors. Her mother works for an investment firm in China.

In addition to her connections to China, it is obvious that Gu is developing her moral compass and views her actions as bigger than herself. She has been an outspoken advocate on issues of anti-Asian racism and gender equality. In her Instagram post announcing the decision to ski for China, Gu informed her audience that she hopes to “unite people, promote common understanding, create communication, and forge friendship between nations.”

This is a powerful message that demonstrates Gu is less interested in geopolitics as she is about using her platform to promote peace and mutual understanding.

Of course, racism is never about the facts. Racism makes people see things that are not there and create problems that do not exist. The reaction to Gu is a manifestation of the ongoing importance of racial loyalty to the American Empire. Americanism has always been synonymous with white imperialist power, both in identity terms and through politics. Those who are perceived to cross the boundaries of political whiteness are traitors to the empire’s civilizing mission to dominate, exploit, and plunder in the name of “freedom” and have crossed the line into enemy territory.

I personally identify with the attacks on Eileen Gu. Growing up as a Vietnamese-American of mixed race, I constantly felt that my racial loyalty to the empire was being tested by peers and institutions. Most people saw me as nothing but a “gook” or a “chink,” a target of imperialist wars of prior generations. The message from American society was clear as a young person: I could either put my head down and embrace the white American side of my family or face the threat of violence from white peers who took issue when I would speak up to their racist demagogy. When I would embrace my status as a subordinate and link with those of oppressed racial and national backgrounds, teachers would ask me why I chose to spend time with “knuckleheads” at the expense of my “potential.”

The U.S. is a racist society. No matter how “mixed-race” the U.S. becomes, white supremacy demands that the masses make political decisions based upon their loyalty to the American imperialist project. Racial loyalty subsumes class contradictions in a sea of confusion and directs political energy toward the destruction of an enemy “other.” Majorities of Americans Westerners have been convinced that China and its people are their enemies.

Eileen Gu has exposed how racial loyalty to the United States remains a prominent feature of a declining empire. Her positive message of peace and cooperation is viewed by many as an act of betrayal to her American citizenship—a euphemism for whiteness. White supremacy is inextricably bound with the Cold War 2.0. being led by the United States and its junior partners. Gu’s desire for common understanding among nations is unattainable unless white supremacy is confronted and thrown into the dustbin of history along with the system of imperialism that gave it birth.