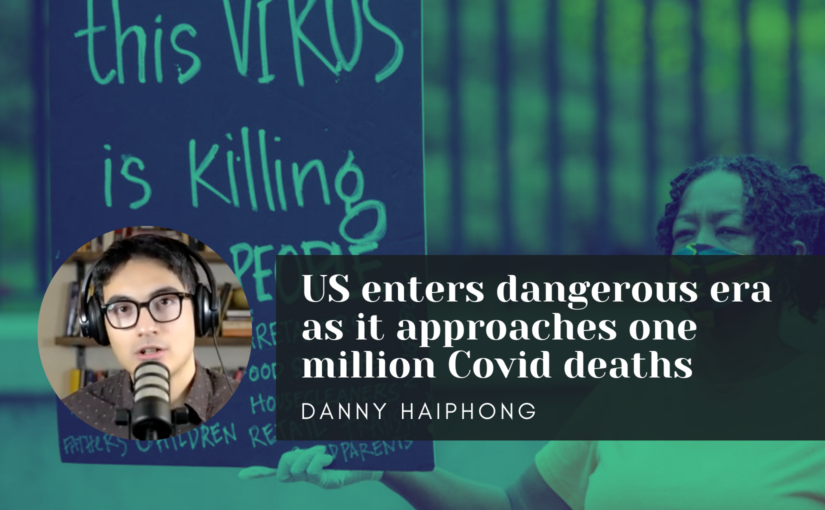 Friends of Socialist China co-editor Danny Haiphong analyzes the significance of the US approaching 1 million Covid-19 deaths by Spring 2022. He concludes that the US has given up on the fight against the pandemic, a move rooted in more than two years of capitalist negligence. The biggest tragedy of all is that ordinary Americans have been stripped of their capacity to learn from and implement China’s effective covid-19 response within their own context. The article was originally published in CGTN on 11 February 2022.

The United States has been one of the most dangerous places to contract COVID-19 since the pandemic began two years ago. The current number of U.S. deaths to COVID-19 is estimated to be 908,000 and trending upward. Hospital beds, healthcare workers, and protective equipment remain in short supply. Both the U.S. political establishment and media continue to spread misinformation about the virus and demonize China to deflect attention from their self-inflicted pandemic disaster. Recent epidemiological forecasts predict that the United States will reach one million COVID-19 deaths by the end of the winter.

These troubling trends do not seem to bother the current political leadership in the United States. Several states are easing public health measures such as mask requirements. The New York Times front page on February 5 ran job growth as its top story while placing at the bottom an announcement that the U.S. had reached 900,000 COVID-19 deaths. The Times concluded that Americans are simply moving on from COVID-19. This contradicts U.S. President Joe Biden’s campaign message that 100,000 COVID-19 deaths were too many when the U.S. reached this milestone in May 2020.

The U.S. response to the pandemic has prioritized politics over the survival and wellbeing of the people. While Donald Trump’s leadership set a dangerous standard of incompetence, the majority of the known deaths to COVID-19 in the U.S. have occurred under the Joe Biden administration. The COVID-19 has exposed the U.S. systemic political problems. Under Trump, China was openly blamed for U.S. shortcomings in addressing the pandemic, and even for the pandemic itself. Under Biden, politicized speculation about China and the pandemic persists but is accompanied by the promise of a return to normalcy that has yet to be met.

China is not the problem. The problem is that the U.S. political system has made little to no effort to address the COVID-19 pandemic in the interests of people in the U.S. or the rest of the world. The U.S. media has condemned China’s dynamic “zero-COVID” strategy while refusing to implement a consistent policy of mass testing, contract tracing and economic assistance required to curb the spread of coronavirus. In the international arena, the U.S. has withheld critical COVID-19 vaccine support and hampered the ability of a number of countries to obtain protective equipment and other necessities through the enforcement of illegal sanctions. U.S. political leadership has adopted a “business as usual” mentality, effectively giving up on the fight against the COVID-19.

The United States is thus entering a dangerous moment in its historical development. Political polarization, acute racism, economic inequality, and addiction to militarism have created a domestic crisis of legitimacy. Majorities of Americans lack trust in the media, as well as in the political leaders who they are told to elect every two to four years. Crises such as wars, poverty, and pandemics require planned and coordinated cooperation among nations and peoples at a scale not yet seen in the history of humanity. This requires a political legitimacy that the United States does not possess.

The United States’ poor performance during the pandemic has shown that a wide separation exists between the people and their government. A similar dynamic is evident in the U.S. approach to the international community – one which is characterized by flagrant violations of international law and unilateral aggression. The U.S. anointed itself as the “leader of the free world” in the post-World War II era. But the U.S. definition of freedom has always privileged the individual and is designed to benefit a small minority of corporate interests. Collective action is spurned and even repressed to the point where outdated anti-communist values and beliefs remain influential in American life.

These qualities taken together will shape how history judges the U.S. model of unfettered monopoly capitalism. The massive casualties incurred from COVID-19 only add to the system’s sordid legacy. In contrast, China’s low COVID-19 death total (less than 5,000) compared to the U.S. gives further prestige to the socialist model of development. China demonstrates what it looks like to address a crisis in the interests of the people. One of the most tragic outcomes of the COVID-19 pandemic is that the U.S. model of development prevented Americans from understanding and advocating for the effective strategies employed by China’s socialist governance system to be applied in their own context.

While U.S political leadership may have given up on COVID-19, the vast majority of humanity does not possess such a privilege. The threat of COVID-19 persists. One million COVID-19 deaths in the United States and the possibility of future variants are demonstrable proof. Ignoring problems doesn’t make them go away. In fact, the crises that plague the United States are likely to worsen unless the system that governs society is transformed from an exploitation-based model to a people-centered model.