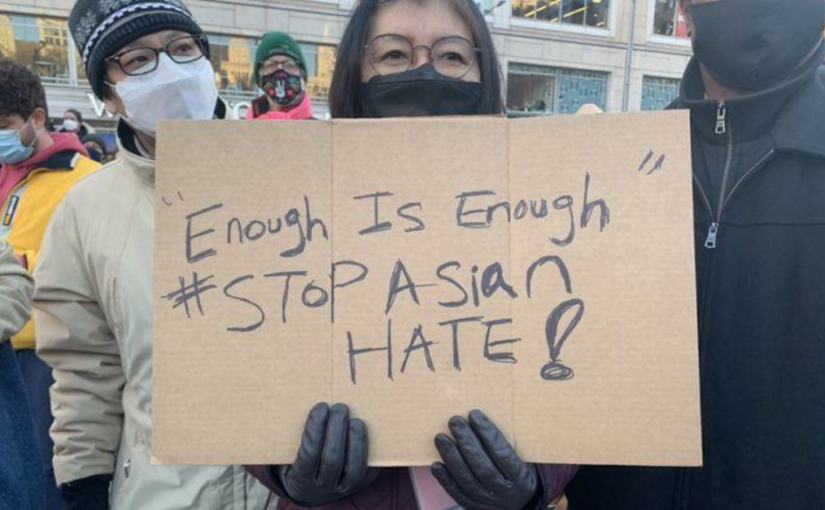 We are pleased to republish this article from US novelist and journalist Eve Ottenberg, originally carried on Counterpunch, in which she exposes how the racist, anti-communist, and at times downright fascist anti-China propaganda of important sections of the US media fuels both murderous racism at home and the danger of catastrophic war abroad.

Hate crimes against Asian Americans mushroomed over the past two years. According to the Guardian, they jumped 567 percent in San Francisco since 2021, and you don’t have to look far to find out why. The main reason is, quite simply, incessant China-bashing in the mainstream media.  This propaganda campaign was kicked off by Trump in his last year in office with absurd, dangerous and bombastic claims that China, perhaps deliberately, caused covid. The anti-China hysteria spread like measles. Now the American right-wing deploys Nazi tropes against the Chinese – a repulsive example was a January 25 Washington Times article headlined “Chinese Communist Party Termites Are Everywhere in the U.S.” With Nazi poison like this circulating through red-blooded American veins, can war fever be far behind?

Meanwhile news industry giants, many serving as pentagon mouthpieces, are totally onboard with this media blitzkrieg. One of the most atrocious instigators is the New York Times. Take its so-called coverage of China’s superior covid policies, “reporting” so slanted you could roll a truckload of innuendos down it.

Unlike the incompetent, murderous, free-market, anti-public health non-system in the U.S., which has killed 900,000 people in a population of 330 million, China, population 1.4 billion, has contained covid deaths to a mere several thousand. These statistics reflect very poorly on our vaunted capitalist arrangement. Indeed, many Americans have been shocked by the comparison of their inept, homicidal health care scheme to communism’s stellar success. So, in jumps the Times January 13 with a crude philippic, trashing China for saving lives from the virus and, drumroll… you got it, suggesting China’s Zero Covid policy can be compared to the Holocaust.

So, time to focus, people. China saves millions of lives, while the U.S. casually murders nearly a million, and how do our media moguls hide this? Easy. Trot out the Holocaust, degrade it yet again, and say that China’s miraculous public health achievement in fact resembles one of the worst genocidal crimes in human history. What’s true of the Times holds true of almost all U.S. and Western media: they will distort facts till they’re blue in the face to conceal the negligent homicide central to our corporate-controlled response to a plague. They are allergic to shame.

Not surprisingly, screams of anti-China outrage nearly drown out coverage of the Beijing Olympics. It’s almost impossible to find an Olympics story that doesn’t take time out to smear China, with approving nods at the staggeringly hypocritical western diplomatic boycott. Or those fatuous meditations called opinion pieces on the defects of this year’s Olympics, because, well, China. Of course. And if you resist this vacuous, paternalistic nonsense you’re a dupe of Xi Jinping, and you probably support the genocide of the Uyghurs – a Chinese Muslim minority whose suspected deaths at the hands of their government don’t even come close to the numbers of Muslims the U.S. killed in Iraq. Or you’re a traitor who approves of the communist oppression of Taiwan, which, at the rate we’re going, will soon be a U.S. protectorate, kind of a Puerto Rico in the East China Sea. So take that!

Of course, this hatred and mendacity infected the culture some time ago. “A new Gallup poll finds that American public opinion on China and Russia has crashed to all time lows,” reported Alan MacLeod in Mint Press News back in March of 2021. “Only 20 percent of Americans hold favorable views toward China.” This is called manufacturing consent. In this case, the anti-China propaganda juggernaut succeeded. Things have not improved since March.

And they were pretty bad then. That was when the “spa shooter” slaughtered six women of Asian descent in Atlanta. As Korean-American Dem representative Andy Kim from New Jersey told the Washington Post last month, regarding anti-Asian hate crime stats, “Just the fact that so many people in our communities in 2021 and 2022 are experiencing that hate – it’s alarming.” According to the Post January 29, “Stop AAPI Hate, a California-based advocacy organization, tallied more than 10,000 incidents targeting Asian Americans and Pacific Islanders from March 2020 through September 2021.”

The nauseating Washington Times article stirred a toxic mish-mash of racism and red-scare delirium. “We are ignoring the terrible danger the CCP is orchestrating in our country. Think termites…One telling insight is the conviction of Harvard chemistry department chair Charles Lieber.”  The article then elaborates on the 2020 -‘22 federal pursuit of the luckless Lieber, victim of the U.S. government’s prosecutorial zeal in ferreting out academics who do what academics do, namely collaborate with each other. The Washington Times breathlessly pants that “dozens of U.S. universities have partnerships with China.” Well, duh. Until Trump decided to grab frenzied headlines by defaming the Chinese, the fact that China was the U.S.’s biggest trading partner generated cordial relations and, well, fraternal academic bonds.

“The CCP has adopted a ‘Made in China 2025’ mission,” the Washington Times hyperventilates, then goes on to list the ways those supposedly devious Asiatics stab freedom-loving Amuricans in the back. But fortunately, the Justice Department under Biden had a minor fit of rationality. On January 20, the AP reported that the DOJ dropped its feeble case against MIT professor Gang Chen, charged with “concealing research ties to the Chinese government.”

DOJ’s retreat here is, according to the AP, “a further setback to the Justice Department’s pursuit of academics in the U.S. accused of concealing research relationships with China.” Gee, I wonder why they might hesitate to reveal those relationships, now practically considered proof of treason, but only so recently, before Trump’s witchhunt, regarded as, I dunno, normal and routine.

Where does all this lead? Well, “news” campaigns of national vilification usually culminate in violence. Think Iraq, Libya, Vietnam, Afghanistan, Korea, Syria, for starters. So now would be a good time for our overheated press to step back, take a deep breath and chill. Because no person of marginal sanity wants another genocide, namely World War III with nuclear-armed China over Taiwan. And if that day comes, the media will not resist. In fact, it would doubtless be in cahoots, war-whooping and enthusiastically egging on politicos and military bigwigs to lethal aggression. (Incidentally, that genocide would include tens of millions of Americans and the same number of Chinese, so the stakes are pretty freaking high).

You doubt this probable media behavior? Just look at the most recent and utterly revolting journalistic display vis a vis Russia and Ukraine. If it was up to our print and TV reporters and other pusillanimous armchair-generals, American troops would have boots on the ground in Kiev. After all, when white house spokeswoman Jen Psaki won herself the Colin Powell liar of the decade award by rummaging around in the “Iraq has WMDs” war storage room and implying February 2 that Russia could use chemical weapons, who among our fearless reporters asked, uh, what was her substantiation? I didn’t hear anyone. Did you?

When state department spokesman Ned Price tried February 3 to palm off some hogwash about the Russians concocting a false flag video with crisis actors and fake corpses, there was one, count ‘em, one, brave reporter from the AP, Matt Lee, who dared ask “What’s your evidence?” Price didn’t have any. He merely repeated the allegation. As the clip of this exchange went globally viral, with Lee comparing the false flag claptrap to “Alex Jones territory,” Price resorted to a series of superior, snotty sneers, betraying the “I’m better than you” attitude for which the Dems were so beloved in 2016 that they lost the presidential election to Donald Trump.

Moscow wants Kiev to be neutral and not join NATO, because it doesn’t want U.S. weapons on its border. The U.S. snorts in derision that everybody has a sacred right to join NATO and threaten the Kremlin. The U.S. will never negotiate away that right divinely bestowed by the exceptional nation. Humility? Negotiations? Give and take? The higher order of being in charge in Washington today doesn’t stoop to that.

So the only thing more imbecilic than liberal anti-Russia war lust is far-right hand-wringing over the U.S. throwing Russia and China into each other’s arms. News flash: the U.S. already did that, years ago. Get over it. China and Russia are now “more than allies.” They may soon have a mutual defense treaty. You reap what you sow.

Overall with China, the media assault has progressed more slowly that the latest attack on Russia, but that’s not for want of steady incitement. The news biz has built up to this since Obama’s deadly pivot to Asia. If the New York Times can confidently invoke the Holocaust as somehow parallel to China’s splendid public health successes, there is no depth to which our news outfits won’t sink, as they ballyhoo their tinsel patriotism by ganging up on official enemies. Such oleaginous displays of their Amerika uber alles bona fides are beyond habitual, they’re automatic. That New York Times article with its idiotic insinuations was a disgrace. Unfortunately, if past journalistic practice is any guide, you can expect more where that came from.