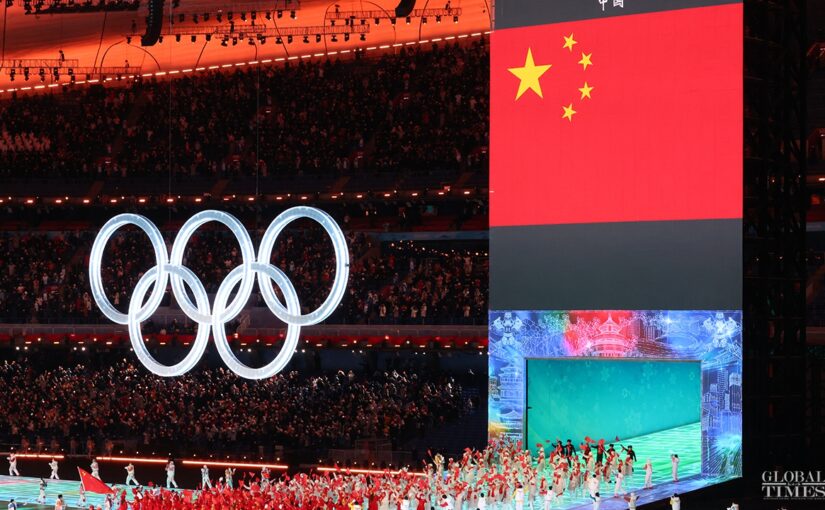 The following article, originally carried in Global Times, by Brian Becker, Executive Director of the US campaigning organisation ANSWER (Act Now to Stop War and End Racism), contrasts US media coverage of the opening of the 2008 Beijing Olympics with that of the current Winter Olympics being held in the same city and in this way outlines the poisonous and corrosive effect of New Cold War propaganda.

Contrasting the US and Western media coverage of the first day of the summer Olympics in Beijing in 2008 with their coverage of the start of the Beijing Winter Olympics in early February speaks volumes about the new political consensus that Washington is attempting to impose on news organizations.

In 2008, France 24, the French news service, reported that “The British press was united in declaring the ceremony the best in Olympic history and a stunning display of China’s new-found confidence.”

The New York Times was almost gushing: The Times wrote at 8:20 am on August 8, 2008, “NBC is not providing television coverage of the spectacular opening ceremony from the Bird’s Nest stadium in Beijing – in fact, you won’t be able to see it anywhere in the U.S. until tonight. But you can follow all that happens here on the Times Olympic blog, LIVE, as it happens.”

Fourteen years later, US media coverage of the opening ceremony of the Winter Olympics was accompanied by a barrage of non-stop political attacks against China by US commentators and the mainstream media. The attacks had a ritualistic and obligatory feel. Sadly, covering a sporting event in China now requires that the host country be endlessly bashed. The US “pivot to Asia” has descended into mandatory demonization of China by US media personalities, news anchors and other opinion moulders.

Rather than praise for the aesthetics of the opening ceremony in the 2022 Beijing Games, the New York Times headline about the ceremony heaped derisive scorn on China: “In a provocative choice, China picks an athlete with a Uyghur name to help light the cauldron.”

Not be outdone, the Washington Post Editorial headline for February 7 reads, “Russia and China announce a bid to make the world safe for dictatorship” over a photo of Russian President Vladimir Putin and Chinese President Xi Jinping standing next to each other following their meeting in Beijing on February 4.

NBC News paid vast sums to cover the 2022 Winter Olympics but now that the demonization campaign against China is in full swing the media giant had to weigh the political fallout they would face if they covered the event simply as a thrilling and drama-filled sports competition.

NBC clearly made their choice. Unlike in 2008, the opening ceremony included a repetitious political diatribe. “Throughout the opening ceremony, NBC turned to experts to explain the gravity of Western governments’ and human rights groups’ allegations against China for its treatment of ethnic minorities,” wrote Reuters on February 4, 2022.

NBC host Savannah Guthrie, denounced China because Dinigeer Yilamujiang, a hugely talented Uygur cross-country skier, was chosen to help light the Olympic cauldron in the opening ceremony. Guthrie called the inclusion of this Uyghur athlete a “stunning decision” by the Chinese government.

Professor Ken Hammond, a highly regarded scholar on China, who teaches at New Mexico State University, responded to Guthrie: “For its enemies, China can do nothing right. If there had been no Uygur visible at the opening of the Games that would have been taken as a sign of their oppression and exclusion. Honoring a Uygur woman as one of the torch lighters has to be spun as a ‘cynical ploy.’ But who are the real cynics, the hypocrites who perpetuate poverty, racism and never-ending marginalization of indigenous peoples in America?”

While the difference in the tone and tenor of the US coverage of the 2008 and 2022 Games is unmistakable the biggest question might be why. What accounts for such a dramatic change? What caused the shift from generally “friendly” reporting to unconcealed animus and hostility? Did China change? Did China adopt a new foreign policy based on hostility toward the US or its allies? Did it invade other countries? These questions, of course, sound almost rhetorical in their asking.

China has not reoriented its core policies and practices since 2008 but it has continued on its path of peaceful development. China is stronger today. It has continued to develop. The switch from “friendly” coverage to blanketed hostility is the result of a big change inside the United States. A consensus position developed in the US foreign policy establishment that China’s forward progress, using its own development model, poses an existential threat to the US’ position as the dominant or sole superpower in world affairs. Although China rejects the concept of superpower status for some states, including itself, the very fact of its continued economic development and its leadership in cooperative initiatives such as the Belt and Road Initiative is interpreted as a grave threat by the new Washington consensus position. It is noteworthy that this consensus was adopted without any meaningful debate either in Congress or the media. It now presents itself not as a topic to be discussed or debated but as an article of faith. Mainstream media outlets are required to reflect and reinforce the consensus.

Unfortunately for the American people who had tuned into the Olympics to watch the splendor of the opening ceremony and the performances of the most talented athletes in the world, the media coverage required them to first endure the full menu of anti-China propaganda dished up by news organizations that have agreed to function as an echo chamber for State Department talking points.