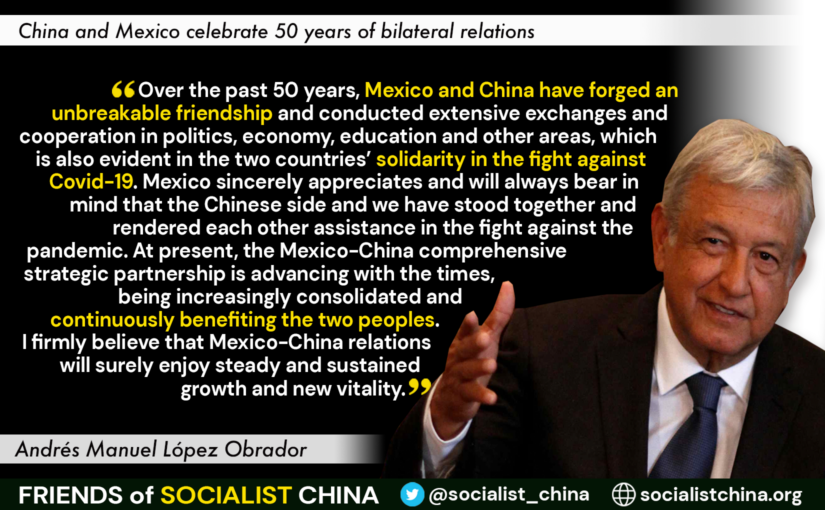 The following report is republished from the Ministry of Foreign Affairs of the People’s Republic of China.

On February 14, 2022, President Xi Jinping exchanged congratulatory messages with Mexican President Andres Manuel Lopez Obrador to celebrate the 50th anniversary of the establishment of diplomatic ties between the two countries.

Xi Jinping pointed out, both China and Mexico are countries with time-honored civilizations and history, and the friendly exchanges between the two peoples date back to ancient times. Since China and Mexico established diplomatic ties half a century ago, especially since the two countries established a comprehensive strategic partnership in 2013, bilateral relations have been developing on a fast track. The two countries have deepened political mutual trust and enhanced friendly exchanges and cooperation in various fields. In the face of the once-in-a-century pandemic, China and Mexico have stood together through thick and thin and extended a helping hand to each other, setting a good example of international solidarity in fighting the pandemic. The tree of China-Mexico friendship has flourished and borne bountiful fruits, bringing tangible benefits to the people of the two countries.

Xi Jinping stressed, I attach great importance to the development of China-Mexico relations, and stand ready to work with President Lopez to take the 50th anniversary of the establishment of diplomatic ties between the two countries as an opportunity to join hands, build on past achievements and forge ahead into the future, advance traditional friendship, deepen mutually beneficial cooperation, promote common development, and continuously enrich the China-Mexico comprehensive strategic partnership so that the two peoples can forever be good friends who trust each other as well as good partners that share prosperity.

Lopez said, over the past 50 years, Mexico and China have forged an unbreakable friendship and conducted extensive exchanges and cooperation in politics, economy, education and other areas, which is also evident in the two countries’ solidarity in the fight against COVID-19. Mexico sincerely appreciates and will always bear in mind that the Chinese side and we have stood together and rendered each other assistance in the fight against the pandemic. At present, the Mexico-China comprehensive strategic partnership is advancing with the times, being increasingly consolidated and continuously benefiting the two peoples. The two sides are working together to address challenges at the regional and multilateral levels. I firmly believe that Mexico-China relations will surely enjoy steady and sustained growth and new vitality.