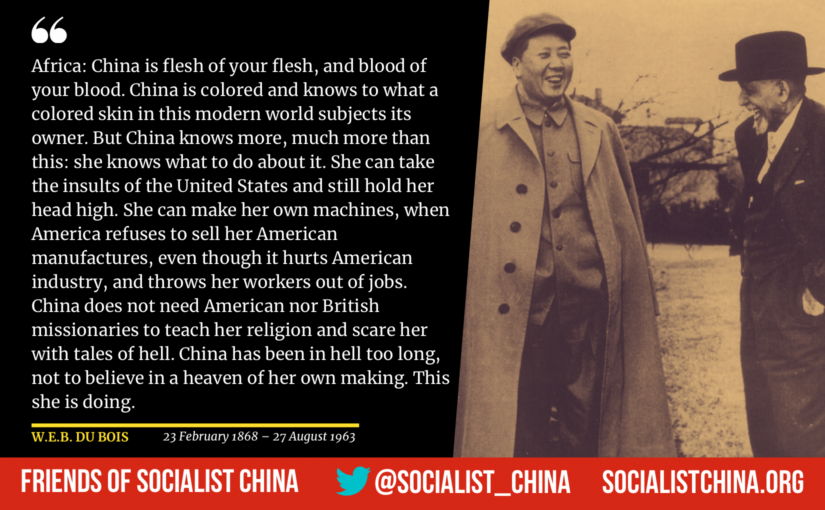 On the 154th anniversary of his birth, we are pleased to republish this speech given in Beijing by the great African-American communist, Pan-Africanist, scholar and freedom fighter W.E.B. Du Bois on the occasion of his 91st birthday.

By courtesy of the government of the 600 million people of the Chinese Republic, I am permitted on my 91st birthday to speak to the people of China and Africa and through them to the world. Hail, then, and farewell, dwelling places of the yellow and black races. Hail human kind!

I speak with no authority; no assumption of age nor rank; I hold no position, I have no wealth. One thing alone I own and that is my own soul. Ownership of that I have even while in my own country for near a century I have been nothing but a “nigger.” On this basis and this alone I dare speak, I dare advise.

China after long centuries has arisen to her feet and leapt forward. Africa, arise, and stand straight, speak and think! Act! Turn from the West and your slavery and humiliation for the last 500 years and face the rising sun.

Behold a people, the most populous nation on this ancient earth, which has burst its shackles, not by boasting and strutting, not by lying about its history and its conquests, but by patience and long suffering, by blind struggle, moved up and on toward the crimson sky. She aims to “make men holy; to make men free.”

But what men? Not simply the mandarins but including mandarins; not simply the rich, but not excluding the rich. Not simply the learned, but led by knowledge to the end that no man shall be poor, nor sick, nor ignorant; but that the humblest worker as well as the sons of emperors shall be fed and taught and healed and that there emerge on earth a single unified people, free, well and educated.

You have been told, my Africa: My Africa in Africa and all your children’s children overseas; you have been told and the telling so beaten into you by rods and whips, that you believe it yourselves, that this is impossible; that mankind can rise only by walking on men; by cheating them and killing them; that only on a doormat of the despised and dying, the dead and rotten, can a British aristocracy, a French cultural elite or an American millionaire be nurtured and grown.

This is a lie. It is an ancient lie spread by church and state, spread by priest and historian, and believed in by fools and cowards, as well as by the downtrodden and the children of despair.

Speak, China, and tell your truth to Africa and the world. What people have been despised as you have? Who more than you have been rejected of men? Recall when lordly Britishers threw the rickshaw money on the ground to avoid touching a filthy hand. Forget not the time when in Shanghai no Chinese man dare set foot in a park which he paid for. Tell this to Africa, for today Africa stands on new feet, with new eyesight, with new brains and asks: Where am I and why?

The Western sirens answer: Britain wheedles; France cajoles; while America, my America, where my ancestors and descendants for eight generations have lived and toiled; America loudest of all, yells and promises freedom. If only Africa allows American investment!

Beware Africa, America bargains for your soul. America would have you believe that they freed your grandchildren; that Afro-Americans are full American citizens, treated like equals, paid fair wages as workers, promoted for desert and free to learn and travel across the world.

This is not true. Some are near freedom; some approach equality with whites; some have achieved education; but the price for this has too often been slavery of mind, distortion of truth and oppression of our own people.

Of 18 million Afro-Americans, 12 million are still second-class citizens of the United States, serfs in farming, low-paid laborers in industry, and repressed members of union labor. Most American Negroes do not vote. Even the rising six million are liable to insult and discrimination at any time.

But this, Africa, relates to your descendants, not to you. Once I thought of you Africans as children, whom we educated Afro-Americans would lead to liberty. I was wrong. We could not even lead ourselves much less you. Today I see you rising under your own leadership, guided by your own brains.

Africa does not ask alms from China nor from the Soviet Union nor from France, Britain, nor the United States. It asks friendship and sympathy and no nation better than China can offer this to the Dark Continent. Let it be freely given and generously. Let Chinese visit Africa, send their scientists there and their artists and writers. Let Africa send its students to China and its seekers after knowledge. It will not find on earth a richer goal, a more promising mine of information.

On the other hand, watch the West. The new British West Indian Federation is not a form of democratic progress but a cunning attempt to reduce these islands to the control of British and American investors. Haiti is dying under rich Haitian investors who with American money are enslaving the peasantry. Cuba is showing what the West Indies, Central and South America are suffering under American big business.

The American worker himself does not always realize this. He has high wages and many comforts. Rather than lose these, he keeps in office by his vote the servants of industrial exploitation so long as they maintain his wage. His labor leaders represent exploitation and not the fight against the exploitation of labor by private capital. These two sets of exploiters fall out only when one demands too large a share of the loot.

This China knows. This Africa must learn. This the American Negro has failed so far to learn. I am frightened by the so-called friends who are flocking to Africa. Negro Americans trying to make money from your toil, white Americans who seek by investment and high interest to bind you in serfdom to business as the Near East is bound and as South America is struggling with. For this America is tempting your leaders, bribing your young scholars, and arming your soldiers. What shall you do?

First, understand! Realize that the great mass of mankind is freeing itself from wage slavery, while private capital in Britain, France, and now in America, is still trying to maintain civilization and comfort for a few on the toil, disease and ignorance of the mass of men. Understand this, and understanding comes from direct knowledge. You know America and France, and Britain to your sorrow. Now know the Soviet Union, but particularly know China.

China is flesh of your flesh, and blood of your blood. China is colored and knows to what a colored skin in this modern world subjects its owner. But China knows more, much more than this: she knows what to do about it. She can take the insults of the United States and still hold her head high. She can make her own machines, when America refuses to sell her American manufactures, even though it hurts American industry, and throws her workers out of jobs. China does not need American nor British missionaries to teach her religion and scare her with tales of hell. China has been in hell too long, not to believe in a heaven of her own making. This she is doing.

Come to China, Africa, and look around. Invite Africa to come, China, and see what you can teach by just pointing. Yonder old woman is working on the street. But she is happy. She has no fear. Her children are in school and a good school. If she is ill, there is a hospital where she is cared for free of charge. She has a vacation with pay each year. She can die and be buried without taxing her family to make some undertaker rich.

Africa can answer: but some of this we have done; our tribes undertake public service like this. Very well, let your tribes continue and expand this work. What Africa must realize is what China knows; that it is worse than stupid to allow a people’s education to be under the control of those who seek not the progress of the people but their use as means of making themselves rich and powerful. It is wrong for the University of London to control the University of Ghana. It is wrong for the Catholic church to direct the education of the black Congolese. It was wrong for Protestant churches supported by British and American wealth to control higher education in China.

The Soviet Union is surpassing the world in popular and higher education, because from the beginning it started its own complete educational system. The essence of the revolution in the Soviet Union and China and in all the “iron curtain” nations, is not the violence that accompanied the change; no more than starvation at Valley Forge was the essence of the American revolution against Britain. The real revolution is the acceptance on the part of the nation of the fact that hereafter the main object of the nation is the welfare of the mass of the people and not of the lucky few.

Government is for the people’s progress and not for the comfort of an aristocracy. The object of industry is the welfare of the workers and not the wealth of the owners. The object of civilization is the cultural progress of the mass of workers and not merely of an intellectual elite. And in return for all this, communist lands believe that the cultivation of the mass of people will discover more talent and genius to serve the state than any closed aristocracy ever furnished. This belief the current history of the Soviet Union and China is proving true each day. Therefore don’t let the West invest when you can avoid it. Don’t buy capital from Britain, France and the United States if you can get it on reasonable terms from the Soviet Union and China. This is not politics; it is common sense. It is learning from experience. It is trusting your friends and watching your enemies. Refuse to be cajoled or to change your way of life, so as to make a few of your fellows rich at the expense of a mass of workers growing poor and sick and remaining without schools so that a few black men can have automobiles.

Africa, here is a real danger which you must avoid or return to the slavery from which you are emerging. All I ask from you is the courage to know; to look about you and see what is happening in this old and tired world; to realize the extent and depth of its rebirth and the promise which glows on your hills.

Visit the Soviet Union and visit China. Let your youth learn the Russian and Chinese languages. Stand together in this new world and let the old world perish in its greed or be born again in new hope and promise. Listen to the Hebrew prophet of communism:

Ho! every one that thirsteth; come ye to the waters; come, buy and eat, without money and price!