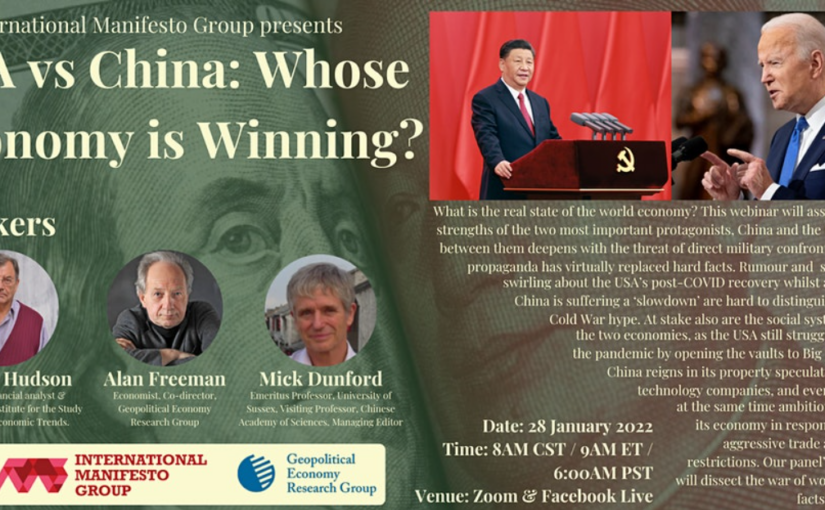 What is the real state of the world economy? This webinar on 28 January 2022, organized by the International Manifesto Group, assessed the relative strengths of the two most important protagonists, China and the US. As the rift between them deepens with the threat of direct military confrontation looming, propaganda has virtually replaced hard facts. Speakers included Michael Hudson, Mick Dunford, Michael Roberts and Alan Freeman. The webinar was introduced and moderated by Radhika Desai. This report was originally published on New Cold War.

Rumour and speculation are swirling about the USA’s post-COVID recovery whilst allegations that China is suffering a ‘slowdown’ are hard to distinguish from simple Cold War hype. At stake also are the social systems of the two economies, as the USA still struggles to throw off the pandemic by opening the vaults to Big Pharma, whilst China reigns in its property speculators and private technology companies ,and goes ever more green, at the same time ambitiously recentring its economy in response to the USA’s aggressive trade and technology restrictions. Our panel’s three experts will dissect the war of words and detach facts from flimflam.

Michael Hudson, financial analyst and president of the Institute for the Study of Long Term Economic Trends. He is distinguished research professor of economics at the University of Missouri–Kansas City and professor at the School of Marxist Studies, Peking University, in China. Hudson has served as an economic adviser to the US, Canadian, Mexican, and Latvian governments, and as a consultant to UNITAR, the Institute for Research on Public Policy, and the Canadian Science Council, among other organizations. Hudson has written or edited more than 10 books on the politics of international finance, economic history, and the history of economic thought.

Mick Dunford is Emeritus Professor at the University of Sussex, Visiting Professor, Chinese Academy of Sciences, and Managing Editor of Area Development and Policy. On January 28, 2022, he spoke at a webinar entitled “USA vs. China: Whose Economy is Winning.”

Michael Roberts worked as an economist in the City of London for various financial institutions for over 40 years – in the heart of the beast! He has written several books including: The Great Recession – a Marxist view (2009); The Long Depression (2016); Joint ed: World in Crisis (2018); Marx 200 (2018); and Engels 200 (2020). He is joint author with G Carchedi of a forthcoming book published this summer by Pluto Press: Capitalism in the 21st century – through the prism of value. He blogs regularly at thenextrecession.wordpress.com.

Alan Freeman, co-director, with Radhika Desai, of the Geopolitical Economy Research Group (GERG) at the University of Manitoba. He was an economist at the Greater London Authority between 2000 and 2011, where he held the brief for the Creative Industries and the Living Wage. He wrote The Benn Heresy, a biography of British politician Tony Benn, and co-edited three books on value theory. He is honorary life vice-president of the UK-based Association for Heterodox Economics and a Vice-Chair of the World Association for Political Economy.