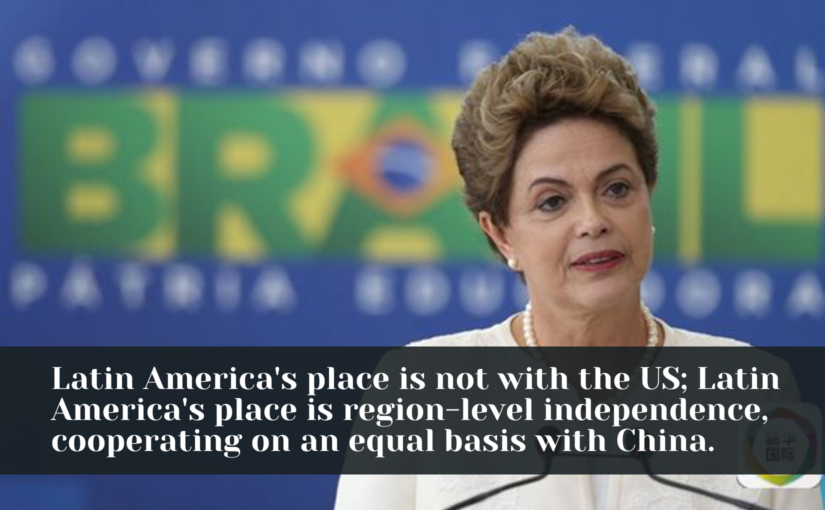 We are pleased to republish this summary of former Brazilian president Dilma Rousseff’s keynote speech at our event 21st Century Socialism: China and Latin America on the Frontline. The article is written by Carlos Martinez and first appeared in Global Times. President Rousseff’s speech can be read in full here.

Friends of Socialist China held a webinar on March 19 themed “21st Century Socialism: China and Latin America on the Frontline”, with a keynote speech from former Brazilian president Dilma Rousseff.

Rousseff, a trained economist, gave a detailed analysis of rising tensions between the US and China, starting with Obama’s “Pivot to Asia” in 2011. She noted that, while the Trump administration was responsible for the sharpest escalation of anti-China hostility, the Biden administration has thus far failed to meaningfully improve the situation.

Rousseff compared the US and China’s performance in a number of key areas, starting with the Covid-19 pandemic. The US “has failed to reduce the deadly effects of the disease in the country”, whereas China has been able to get the virus under control and provide enormous numbers of vaccine doses to Africa, Latin America, the Middle East and Asia.

In terms of the current crisis in Europe, Rousseff noted that while the US was adding fuel to the fire by imposing unilateral sanctions and sending advanced weaponry to Ukraine, China’s position has been characterized by the pursuit of peace, dialogue, respect for sovereignty, and a recognition of the need for common security in the region.

Rousseff opined that China’s rapid economic rise is the fundamental reason for the US’s seemingly sudden transformation from friendship to hostility. Three decades ago, China represented just under 4 percent of the global economy, compared to the US’s 21 percent. Now China’s share has risen to over 18 percent, while the US has contracted to 15 percent in purchasing power parity (PPP).

The policies of neoliberalism – financialisation, deregulation, and “small government” – have resulted in severe economic losses throughout the West. China meanwhile has met its first centenary goal of eliminating absolute poverty by 2021. Rousseff said that China’s strength lies precisely in having rejected the neoliberal model and pursing its own path: socialism with Chinese characteristics. This is a market model, but heavily regulated and combined with planning in order to ensure that it meets the needs of ordinary people.

In the US, per capita income is stagnating while inequality rises, China’s emphasis on common prosperity means that living standards have improved for all sectors of the population.

Rousseff highlighted the fierce competition between the US and China in terms of new technology, with China increasingly taking the lead in areas such as artificial intelligence, 5G, the internet of things, smart cities, digital currency and cryptography. Such technologies are at the heart of the Fourth Industrial Revolution. With China’s policy of noninterference and its willingness to engage in advanced industrial and technological partnerships with other countries, the Global South has an important opportunity to be part of this Fourth Industrial Revolution.

Analysts in the US had for decades been talking about an impending economic crisis in China, but the financial crisis that broke out in 2008 was centred in the West. Indeed it was China’s continued growth that contributed most to the global recovery. However, the fact that the US fell into recession while China carried on growing triggered alarm bells in Washington. The US elite concluded that China’s rise must be contained, for the sake of preserving US dominance.

This logic led to escalating hostilities and the threat of a New Cold War. Such a Cold War is a lose-lose proposition. So-called “decoupling” is absurd in a context where China is at the heart of a vast number of complex value chains, and the number one trading partner to the majority of the world’s countries. The main effect of “decoupling” would be to isolate and disconnect the US from the rest of the world, rendering its businesses less competitive and its population poorer.

Rousseff talked in detail about the need for Latin America to adopt an independent foreign policy and make a permanent break with the Monroe Doctrine; to end the region’s traditional subjugation to the interests of the US.

It is imperative for Latin America to participate actively in the Fourth Industrial Revolution; to move beyond extracting and selling primary commodities; to follow a path of industrial and technological upgrade, rather than engaging with new technology simply as a consumer.

Other speakers at the webinar included Ma Hui, China’s ambassador to Cuba, and Carlos Miguel Pereira Hernández, Cuba’s ambassador to China, both of whom discussed the blossoming friendship and coordination between the two countries.