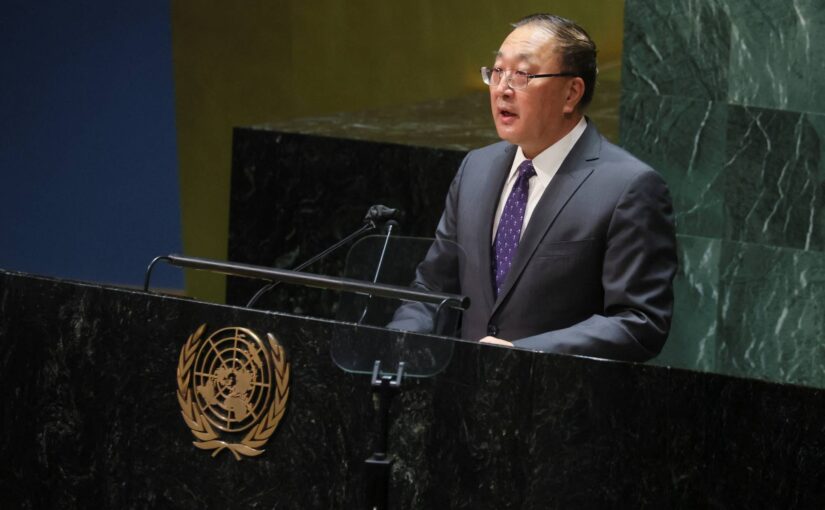 We publish here the text of the statement made by Chinese Ambassador Zhang Jun at the Emergency Special Session of the United Nations General Assembly, held on April 7th, where the Russian Federation’s membership of the UN Human Rights Council was suspended. In explaining his country’s negative vote, Ambassador Zhang reiterated China’s respect for international humanitarian law and called on all parties to the conflict in Ukraine to protect civilians, especially women, children and other vulnerable groups. Noting that dialogue and negotiation are the only way out, he further noted that the people of the world, especially of the developing countries, are paying a price, for example in soaring food and oil prices, although they are not parties to the conflict.

Consistent with US pressure, the resolution was passed with 93 votes. However 24 countries (including all the socialist countries) voted against, 58 abstained and 18 did not participate in the vote. As only negative votes were counted in this way, the resolution was deemed to have passed with the required two thirds majority. It is, however, a noteworthy fact that a small majority of UN members actually failed to vote in favour of the resolution.

On the Ukraine issue, China always believes that the sovereignty and territorial integrity of all countries, including Ukraine, should be respected, that the purposes and principles of the UN Charter should be upheld, that the legitimate security concerns of all countries should be taken seriously, and that all efforts conducive to a peaceful settlement of the crisis should be supported. Putting an early end to the fight is the urgent expectation of the international community. It is also what China is striving for. China supports all initiatives and measures that will help ease the humanitarian crisis in Ukraine. We call on the parties concerned to respect international humanitarian law, and take concrete actions to ensure the safety of civilians, and protect the basic rights and humanitarian needs of women, children and other vulnerable groups. The reports and images of civilian deaths in Bucha are disturbing. The relevant circumstances and specific causes of the incident must be verified and established. Any accusations should be based on facts. Before the full picture is clear, all sides should exercise restraint and avoid unfounded accusations.

Dialogue and negotiation is the only way out of the Ukraine crisis. China always believes that the international community should remain rational, strengthen unity, and do more to facilitate dialogue and negotiation and the political settlement. It should not set up obstacles, or add resistance, let alone add fuel to the fire in aggravation of confrontations. We regret to see that the conflict has caused civilian casualties and massive displacements, and that the all-dimensional, indiscriminate and bottomless sanctions have brought serious, negative impact on the post-pandemic recovery, creating new and complex problems, reversing hard-won development gains, and making the realization of the 2030 Agenda even more difficult. People around the world, especially those in developing countries, have to bear the soaring oil and food prices. Life amid the pandemic has become even more difficult, and the rights of women and children even more difficult to be protected. Developing countries are not parties to the conflict, yet they are forced to get involved in this geopolitical competition and great power rivalry. This is unfair. Some individual countries, while talking loudly about peace, are obsessed with creating bloc confrontations, including provoking tensions in the Asia-Pacific region. This self-contradictory and inconsistent approach is very dangerous and worrying, and should be resolutely rejected.

China always calls for promoting and protecting human rights through constructive dialogue and cooperation on the basis of equality and mutual respect. At the same time, we firmly oppose the politicization or instrumentalization of human rights issues, oppose the selective and confrontational approaches as well as double standards on human rights issues, and oppose exerting pressure onto other countries in the name of human rights. This is also an important element of General Assembly Resolution 60/251 on the establishment of the Human Rights Council.

The draft resolution before us will deprive a country’s legitimate membership in the Human Rights Council. Such an important matter must be handled with the utmost delicacy, calmly, objectively and rationally, on the basis of facts and truth.

Nevertheless, this draft resolution was not drafted in an open and transparent manner, nor did it follow the tradition of holding consultations within the whole membership to heed the broadest opinions. Under such circumstances, such a hasty move at the General Assembly, which forces countries to choose sides, will aggravate the division among Member States and intensify the contradictions between the parties concerned. It is like adding fuel to the fire, which is not conducive to the de-escalation of conflicts, and even less so to advancing the peace talks. Dealing with the membership of the Human Rights Council in such a way would set a new and dangerous precedent, further intensify the confrontations in the field of human rights, bring a greater impact on the UN governance system, and produce serious consequences. Therefore, China will have to vote against this draft resolution.

China calls on all parties to work together in the same direction, so as to create opportunities for peace and prospects for negotiation. China will continue to hold an objective and impartial position and play its responsible and constructive role in this regard.