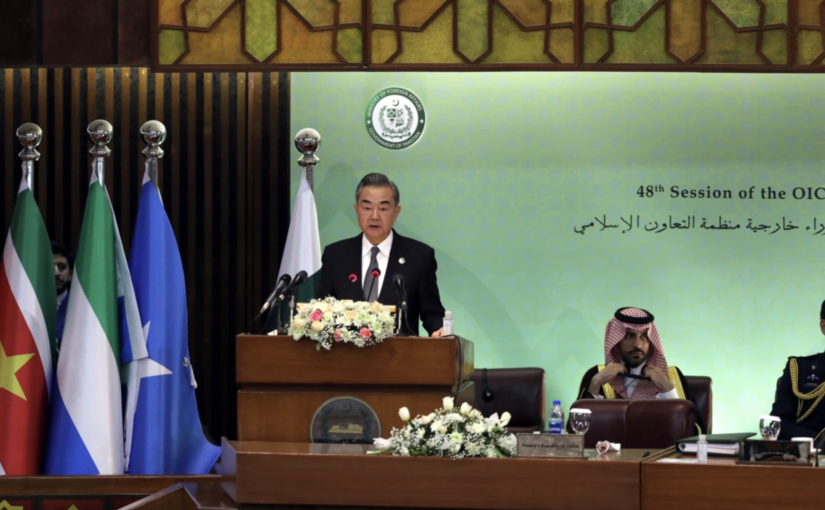 We are very pleased to republish this important article by Senator Mushahid Hussain, Chairman of the Pakistan-China Institute and a member of our advisory group, originally published by Wall Street International and also republished by the Inter Press Service (IPS) news agency. Taking the recent ‘historic first’ of Foreign Minister Wang Yi’s address to the Organisation of Islamic Cooperation (OIC) meeting in Islamabad as his starting point, Senator Hussain notes that the connection between the Chinese and Muslim civilisations dates back to the very earliest days of the Islamic faith and has been a consistent cornerstone of New China’s diplomacy since the founding of the People’s Republic to the present. Key early examples given by the Senator include China’s key role in the 1955 Bandung Conference in Indonesia and its pioneering recognition of the Palestine Liberation Organisation (PLO).

The retrenchment of American power in the Middle East and the larger Muslim world, coupled with the war in Ukraine, has provided a geopolitical breather for China. Beijing is effectively deploying this to make strategic inroads into the region, given this vacuum and focus on Europe. The recent invitation to Chinese Foreign Minister Wang Yi to address the Organisation of Islamic Cooperation (OIC) conference in Islamabad is a ‘historic first,’ and a significant breakthrough for Chinese diplomacy. For the first time, the foreign minister of the Peoples Republic of China was invited to address the most representative platform of the 57 member body representing the 1.5 billion Muslims. During his speech at the OIC conference in Islamabad on the 22nd March 2022, Foreign Minister Wang Yi talked about the “long standing relationship between China and the Muslim world” and reaffirmed that China would continue supporting Muslim countries in their quest for political independence and economic development.

Historically, China has always been etched in the Muslim consciousness as a country with a great civilisation based on knowledge, learning and development. For example, there is a famous saying of the Holy Prophet Mohammad (Peace Be Upon Him), 1,400 years ago, which urged Muslims to “seek knowledge, even if you have to go to China,” implying that although China was physically far away from Arabia, it was a land of learning. Soon after the end of the Cold War in the 1990s, a professor of the prestigious American university Harvard, Prof. Samuel Huntington, talked of a ‘clash of civilisations’ in which he implied that Western civilization would be at odds with both the Islamic and the Confucian civilisations. Interestingly, he also talked of a united front of the Islamic and Confucian civilisations.

During his speech at the conference on Dialogue among Civilisations, held in Beijing in May 2019, Chinese President Xi Jinping mentioned the contribution of the Islamic civilisation to “enrich the Chinese civilisation” and also referred to the Holy Mosque in Makkah (Mecca) as well as the travels to China of the Muslim explorer, Ibn Batuta, who wrote favourably on China and the Chinese people.

China has a long standing relationship with the Muslim world. After the Chinese revolution in 1949, Pakistan was the first country in the Muslim world to recognise the People’s Republic of China in May 1950. The first institutional interaction between China and the Muslim countries took place at the 1955 Afro-Asian Summit in Bandung, Indonesia. It was hosted by the world’s largest Muslim country, Indonesia and Pakistan and China were among the countries attending this historic summit. China shares a border with 14 countries, five of which are members of the OIC and none of these have border disputes with China.

In January 1965, when the Palestine Liberation Organisation (PLO), was formed, China was among the first countries who recognised it. And in the 1960s and early 70s, China also provided material support and aid to various Muslim countries that were facing economic and political pressures, including Pakistan, Nigeria, Indonesia, South Yemen and Egypt.

As a permanent member of the United Nations Security Council, China also has been in the forefront of countries that have a proactive approach to the Muslim world. China, for example, presented a Middle East peace plan and it was unveiled during visits to China in May 2013 by the President of the Palestinian Authority, Mehmood Abbas, and the Prime Minister of Israel, Benjamin Netanyahu. During his meeting with the two leaders, President Xi Jinping presented the 4-point peace plan that called for an independent Palestine State alongside Israel, based on the 1967 borders, with East Jerusalem as its capital. While recognising Israel’s right to exist in security, the Chinese peace plan also called for an end to building Jewish settlements in the occupied territories of Palestine, cessation of violence against civilians and termination of the Israel blockade of Gaza. The peace plan also called for resolving the issue of Palestinian prisoners in Israeli jails and sought more humanitarian assistance for the Palestinians, while underlining that these are “necessary for the resumption of peace talks between Israel and Palestinian Authority.”

China also has been principled on the issue of Syria urging an end to both interference in Syrian affairs and an end to the Syrian civil war. In January 2022, China invited Syria to be part of the Belt & Road Initiative (BRI). China today is the largest importer of crude oil in the world and almost 50% of that oil comes from the Muslim countries of the Middle East, especially Saudi Arabia, Iran and the UAE. Saudi Arabia has also invited President Xi Jinping to visit the Kingdom and there have been media reports that China and Saudi Arabia are engaged in discussions to have their oil trade done partially in Yuan or the RMB, the Chinese currency. Defence cooperation between China and the Muslim world is also expanding and the Chinese advanced jetfighter J10C is now in use in countries like Pakistan and the UAE. In January 2022, China and Iran signed a comprehensive Strategic Accord which will run for 25 years, worth well over $400 billion dollars.

During his speech at the OIC conference on the 22nd March, Foreign Minister Wang Yi said that “China is investing over 400 billion dollars in nearly 600 projects across the Muslim world under the BRI.” He underlined that “China is ready to work with Islamic countries to promote a multi-polar world, democracy in international relations and diversity of human civilisation, and make unremitting efforts to build a community with a shared future for mankind”. On the issue of Palestine and Kashmir, Wang Yi said that “China shares the same aspirations as the OIC, seeking a comprehensive and just settlement of these disputes.”

Another example of close ties between China and the Muslim world was the February 2022 Beijing Winter Olympics, where a majority of Muslim countries like Pakistan, Egypt, Saudi Arabia, UAE and Qatar had a high level of representation, despite the boycott called by certain Western countries. Also, only last week, on the 30th March, China hosted an important conference, the Meeting of Foreign Ministers of Afghanistan’s Neighboring Countries , which was well attended.

China has also received support from Muslim countries on the issue of Xinjiang at the UN Human Rights Council. In fact, in July 2019, when a group of 22 nations led by the West sent a letter to the UN Human Rights Council criticising China on Xinjiang, not a single Muslim country was a signatory of that letter, while another group of 37 countries submitted a letter on the same issue defending Chinese policies. These countries included all the six Gulf countries plus Pakistan, Algeria, Syria, Egypt, Eritrea, Nigeria, Somalia, and Sudan — all Muslim countries.

Given the changing geopolitical scenario, where there is a shift in the global balance of economic and political power, away from West and toward the East, followed by calls for a New Cold War, China’s thrust for cooperation and connectivity, given the common threat of the Coronavirus pandemic and the need for connectivity through BRI, has a broad resonance in the Muslim world. The Muslim countries see their relations with China as a strategic bond to promote stability, security and economic development in the Muslim world and the BRI has become the principal vehicle in the promotion of such an approach. In the coming years, China’s partnership with the Muslim world is likely to be strengthened, given the mutuality of interests and the convergence of worldviews in upholding a world order based on International Law, the UN Charter and the Five Principles of Peaceful Coexistence.

Ironically, thirty years after enunciating the Huntington thesis on the ‘clash of civilisations,’ which talked of the Islamic and Confucian Civilisations coexistence with each other but possible confrontation with Western Civilisation, recent developments may be pointers to a self-fulfilling prophecy!