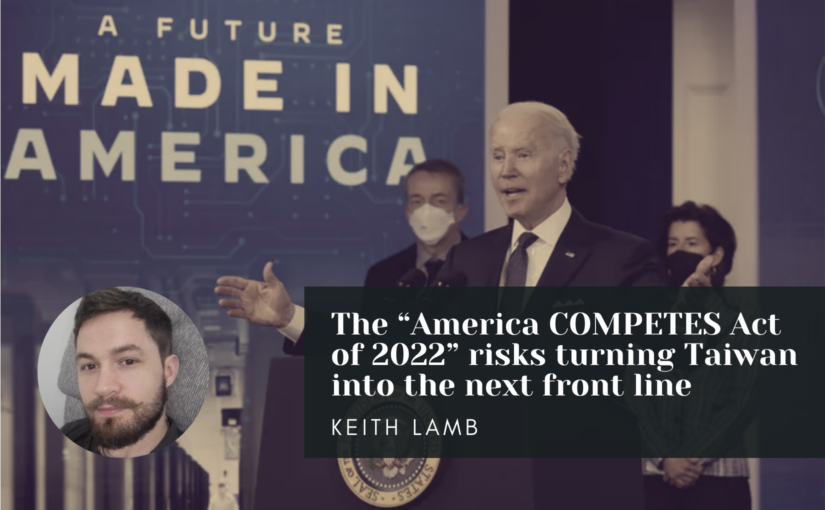 Keith Lamb explains how one of the many dangers in the America COMPETES Act, which now just awaits presidential ratification, is that it effectively writes into US law a repudiation of the ‘one China’ policy, thereby potentially opening the door to a catastrophic confrontation.

The America Creating Opportunities to Meaningfully Promote Excellence in Technology, Education and Science (COMPETES) Act of 2022 only needs to be passed by the President and it will become law. The bill sounds innocuous but the contents of it are not. While the bill is partly about promoting US science and technology it is just as much about preventing the rise of China’s 1.5 billion as well as the Global South who have democratically partnered with China to build a new world through the Belt and Road Initiative.

In attempting to prevent China’s rise the bill pays special attention to preventing cross straits reunification with the country’s Taiwan province, which could lead to chaos on both ends of Eurasia while the US gains. Already, in the west, the Ukrainian front has been opened at the expense of Europeans who are now forced to buy US gas all the while, as reported in the Global Times, the US has increased its purchase of Russian crude oil by 43 percent. In the east a similar strategy is at play. Taiwanese and European tech companies have been forced to limit their sales to mainland China while the US has made special tech provisions to continue selling.

If the America COMPETES Act of 2022 is passed stoking tensions with China and playing the Taiwan card will become US law! If a war can also be sparked in the east then the US will, as in Ukraine, seek to profit geopolitically and economically by fuelling tensions through weapons sales and “sitting it out” while others are sacrificed in a proxy war.

Many do not realise the seriousness of the “America COMPETES Act of 2022” because, on March 28, its contents were quietly replaced “lock stock” with the more aggressive “United States Innovation and Competition Act of 2021” which has yet to pass the House. Looking at the bill it is less about competing and more about making sure there are no other competitors.

The bill is just as much about preventing China’s rise as it is about improving US technology and science. As a case in point the bill references the word “science” 582 times; “technology” 811 times; China 666 times; and Chinese 202 times. Indeed, “America” is only raised 297 times.

There is also an obsession with China’s provinces. “Taiwan”, for example, is referenced 185 times which is bizarre considering this bill concerned with “technology” and “science”, doesn’t even mention “California”, the centrepiece of US hi-tech, once. Imagine the consternation that Americans would feel if China was on the verge of signing a bill into law that mentioned how they were going to deal a blow to US states!

One way the US plans to deal with Taiwan is to “recognize Taiwan as a vital part of the United States Indo-Pacific strategy.” However, what can this achieve except for heightened tensions? Beijing might consider this as crossing the sovereign red line, especially when the bill calls for “regular transfers of defense articles to Taiwan.”[1]

Just like talk of NATO expanding east exacerbated tensions with Russia and goaded it into military action this bill will exacerbate Chinese concerns that the US is cooking up a similar stratagem to spark a hot war. As such, this bill rather than protecting Taiwan could throw it into a proxy war as Beijing resorts to force as a last resort. All the while, the US, on the other side of the Pacific, would profit handsomely especially as the bill urges “Taiwan to increase its defence spending.”

Section 3215 of the bill entitled “Treatment of Taiwan government” states that the US will drop the practice of “referring to the government in Taiwan as the Taiwan authorities” and instead engage with government departments as “the legitimate representative of the people of Taiwan.”[2] This has the terrifying implication of “tiptoeing” to full recognition of Taiwan as an independent state and destroying the bedrock of peace in East Asia, which has been the “One China Policy.”

Bizarrely, the bill goes on to say: “Nothing in this paragraph shall be construed as entailing restoration of diplomatic relations with the Republic of China (Taiwan) or altering the United States Government’s position on Taiwan’s international status.” As such, the US stance is further obfuscated, which risks misjudgement on both sides. While for the US this may be a “play on words” for those on both sides of the Taiwan Strait these words threaten their basic peace and security.

The goading towards war is even more obvious considering the bill will give legitimacy to the so-called “Republic of China’s” official emblems such as flags in official ceremonies. The bill even suggests it will meddle with Taiwan’s media and political institutions. For example, there will be “media training for Taiwan officials and other Taiwan entities targeted by disinformation campaigns.” However, as we have seen with the fake Uyghur genocide claims, constructed in Washington, which the bill raises as fact, the masters of disinformation do not reside in Beijing. As such, this “media training” will add another layer of media distortion onto Taiwan.

Taiwan must be wary for this bill will even seek to plant “fellows” directly into Taiwan’s governing system. What this means precisely is currently unclear, but it could amount to Taiwan’s governing organs being completely captured by a foreign entity to observe and dictate the island’s policies. It is unlikely that such a parasite would tolerate those who sympathise with China’s peaceful reunification.