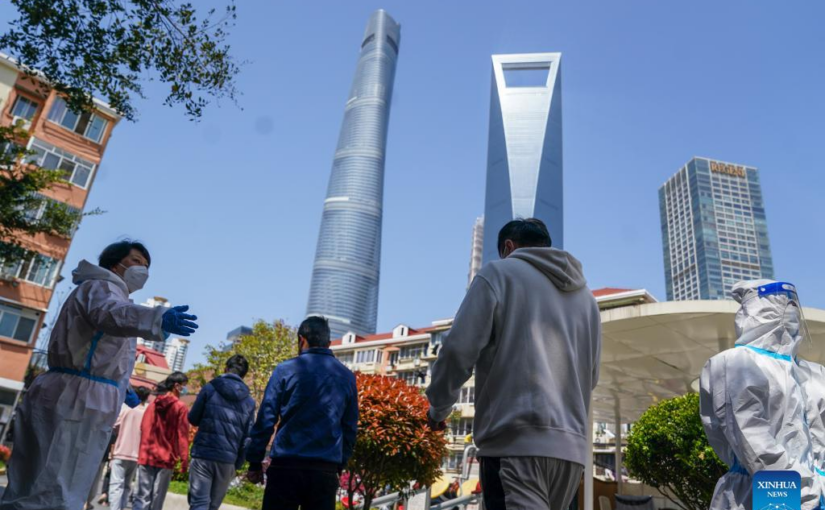 We are pleased to republish this insightful article by Ian Goodrum in China Daily discussing the recent Covid-19 outbreak in Shanghai and questioning the logic and motives of those in the West claiming that China’s dynamic Zero Covid strategy is unsustainable.

There’s no denying Shanghai is going through hard times.

As a local COVID-19 outbreak has grown there, so have the measures to keep it in check. Residents in some areas have been in lockdown for weeks, and the whole city has been at a standstill since the beginning of the month. Daily case counts there have eclipsed the peaks in Wuhan at the start of the pandemic, and the city has yet to see a drop for several days. At present, tens of thousands of new cases are being reported every 24 hours. We can only hope those figures start to change and the city can overcome this dark moment together.

But along with these troubling numbers come familiar refrains from a chorus we know all too well. Just as they did in previous waves, corporate media outlets are practically foaming at the mouth in their rush to declare the end of China’s zero-COVID policy. We heard this with last year’s Delta variant, we heard it as Omicron began its reign as the dominant strain, we’ve heard it since the enormity of the US and Europe’s epidemic control failure was impossible to ignore. They’ve been singing the same tune for so long the record’s not just broken, it’s fused to the phonograph.

As always, these people are either willfully ignorant or pushing an agenda, and that’s a distinction without a difference these days. Yes, the situation in Shanghai is dire, but China is a big country. There are plenty of cities that have had their own Omicron outbreaks but made it through with minimal consequences. Shenzhen, for example — an international hub in its own right and a massive population center — nipped Omicron in the bud with an early lockdown and a mass mobilization of personnel to handle testing and supply delivery. Qingdao, Tianjin, Dongguan and many other places have been able to tamp down this supposedly unavoidable variant with relative ease.

Meanwhile, virologists and epidemiologists based in the West are on the verge of tearing their hair out. Despite their warnings, an apparent mass delusion is taking hold of populations there, spurred by governments, corporations and media that want a return to business as usual. Now that danger to the wealthy has dropped to practically nil, and those most vulnerable to infection have been pushed back to work in face-to-face service jobs by the expiration of pandemic benefits, it’s been decided oh-so-conveniently that COVID is over.

But as it turns out, viruses don’t care if you want them to stop spreading. The notion Omicron was a pandemic off-ramp, and a “let ‘er rip” strategy —a laissez-faire attitude toward the virus that amounted to holding nationwide chicken pox parties —the best way forward have yet to be vindicated. We don’t have conclusive data yet on the length of immunity Omicron confers, or whether it can reliably prevent reinfection.

Everything we know about this virus tells us vigilance should remain our watchword, so declaring victory against the pandemic feels like a “Mission Accomplished”-style act of desperation to spin the narrative. It’s happened before; remember last July 4, when US President Joe Biden celebrated a “summer of freedom”? That embarrassing incident was consigned to the memory hole not long after, once the country saw its worst-ever infection numbers and a catastrophic daily death toll.

While this latest infection wave seems to be on the ebb, we don’t know what the future holds. New variants and subvariants threaten to shuffle everything back to square one, and the risk of “long COVID” — lasting symptoms which can debilitate even the vaccinated for months — shouldn’t be taken lightly. I for one value having functional lungs, and it would be fair to say the people of China do too.

It may be inconvenient to keeping the money train rolling, but if public health is to be preserved politics must follow the science and not the other way around. To that end, policies should make hewing to best practices as smooth as possible. Testing should be free along with vaccination to make sure cases are caught early and those who do get infected are less likely to develop severe symptoms. And when viral spread makes lockdown essential, those unable to work should not be made to worry over a lack of necessary supplies, nor a loss of income or housing.

It’s that uncertainty and fear that’s led to so many believing what they’re told about this pandemic, including conspiracies about a “lab leak” or “Chinese cover-up”. When people have no choice but to endanger their lives to avoid unemployment or homelessness, they become fertile ground for bad actors sowing doubt and misinformation. Rather than accept the reality their societies have failed them — or worse, treated them as disposable in the interest of jump-starting economic growth — they retreat to comfortable fictions about countries they’ve already been conditioned to despise.

The situation in Shanghai shows us how easily things can get out of hand, but China as a whole shows us Omicron is far from unbeatable. We have a tool kit built over years of experience, and thus far it has proven to work even against variants corporate media have called inevitable. But it is still too early to throw open the proverbial doors by declaring an end to zero-COVID, dynamic or otherwise. Until a critical mass of people — particularly the immunocompromised and the elderly — have received the three doses necessary to reduce risk of hospitalization or death to a manageable percentage, a “live with it” strategy will become a “die with it” strategy in record time.

China will only have one chance to open up, and we’ve seen what happens when countries get it wrong — hundreds of thousands, even millions of preventable deaths. Such grim statistics should be cause for mass outrage, but western mainstream media has managed to normalize this shocking state of affairs to a disturbing degree. The New York Times called 100,000 dead Americans an “incalculable loss” in May 2020, with 1,000 of their names taking up its entire front page. When that number had gone up nine times this February, what did that same newspaper run as its headline? “900,000 Dead, but Many Americans Move On.” The story didn’t even make it above the fold.

It is profoundly immoral to demand human lives be sacrificed at the altar of profit, and that’s precisely what calls for a 180-degree reversal of policy in China amount to. Just because the advanced capitalist economies have priced hundreds or thousands of excess deaths per day into the cost of doing business doesn’t make it right.

So many have sacrificed to prevent the virus’ spread in China, especially the medical workers and volunteers who have joined the front lines of pandemic control time and again. They are in Shanghai now, doing their utmost to stop this new outbreak. We dishonor them with complacency and callous language about an “unstoppable” variant we need to “live with”, which is surrender by another name.

They’re not giving up. Neither should we.