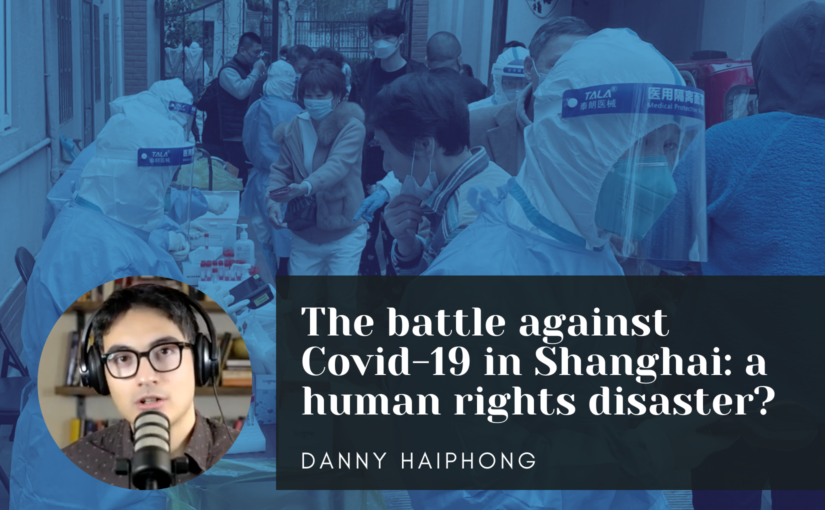 In this latest piece, originally published on his Chronicles of Haiphong, our Co-Editor Danny Haiphong unpicks the western media’s propaganda onslaught regarding the current Omicron outbreak in Shanghai and the resultant lockdown. Whilst acknowledging the hardships and frustrations of the current situation, Danny points out that, when condemning China’s zero-Covid strategy, the western media ignores the solidarity and sacrifice of ordinary people.  When it comes to tackling Covid, as in other areas, he notes that the real criminals infringing human rights are to be found in the imperialist countries of North America and Europe.

The city of Shanghai is currently battling an outbreak of COVID-19’s Omicron variant, tallying upwards of 350,000 new cases in a matter of weeks. Much of the city has been placed under some form of lockdown to contain the spread of the virus. Case numbers continue to rise. In predictable fashion, Western media has used the occasion to condemn China’s dynamic zero-COVID strategy. Videos of frustrated residents went viral across the West as an example of the “evils” of China’s communist party-led government.

Indeed, China’s latest battle with COVID-19 has not been without hardship. Logistical issues with food and medical deliveries have been a source of frustration. Tragedy struck when a grassroots healthcare worker died by an apparent suicide, raising concerns about the mounting levels of stress for grassroots volunteers and cadres battling the virus around the clock. The central government has taken rapid measures to alleviate pressure on the local government. Thousands of doctors and volunteers have traveled from other cities and provinces to improve the delivery of food and medications.

As has been the case throughout the pandemic, Western observers have used the latest outbreak in Shanghai to demonize China’s dynamic zero-COVID strategy. The rapid spread of COVID-19 in Shanghai appears to validate Western media claims that China’s zero-COVID strategy does more harm than good. Western countries, led by the United States, have taken a “live with the virus” approach to justify the roll back of all mitigation measures and social welfare protections. The massive death toll to COVID-19 incurred in the West is viewed as merely the cost of doing business. Fatigue over rampant misinformation and inconsistent COVID-19 policy is almost as high as the mistrust that majorities of people in the West possess in their governments.

What is happening in Shanghai cannot be separated from this vital context. The tradeoffs that are acceptable in the West are vastly different from what is acceptable in China. In China, hardship in the form of logistical issues and errors are more tolerable than the loss of life and long-term economic stability. For the US and its Western counterparts, the daily loss of life and long-term economic stability is widely accepted by government administrations while short-term economic gain and individual freedom is venerated. It is therefore understandable that many in the West would look upon Shanghai as a human rights disaster.

That the Western media has waged a non-stop propaganda war against China has not helped matters, either. Type the word “Shanghai” into Google and one will find dozens of Western media articles painting China as a draconian, “authoritarian” regime. The propaganda is truly staggering. A prime example is the way that the New York Times and other Western media have covered a video-recorded confrontation between residents and police in Shanghai’s Pudong district.

Police in hazmat suits have been accused of removing of residents so that their housing could be transformed into quarantine facilities. According to Andy Boreham, a journalist for the Shanghai Daily, Western media failed to inform its readers that the residents were being housed in large, scantly occupied “talent” apartment complexes subsidized by the government. These apartments are more akin to hotel arrangements. Residents were offered alternative living arrangements free of charge and their apartments sealed off while the rest of the complex was used for quarantine. While it’s unclear what caused the confrontation, what is clear is that the situation is more complex than the dystopic picture provided by the Western media.

The same goes for sensationalist coverage of screaming residents and the needs of the elderly. These issues were promptly addressed by the central government. No one is starving in Shanghai. Life is difficult, but China has successfully prevented the loss of a single life up until this point despite the rapid rise in cases of the contagious Omicron variant. While the Western media condemns China’s zero-COVID strategy in Shanghai, it completely ignores the solidarity and sacrifice made by ordinary people. Thousands of doctors, CPC members, and community volunteers have given everything they have to protect the vulnerable. Residents in lockdown are demonstrating solidarity through WeChat groups that facilitate the exchange of goods.

So no, Shanghai is not a human rights disaster despite the challenges that have arisen during its battle with Omicron over the past several weeks. The truth is that the US and the West have no ground to stand upon when it comes to human rights. Nearly half of all COVID-19 deaths have occurred in the US and Europe. Economic “freedom” in the US is a privilege of the rich. The vast majority of people in the US and Europe are either mired in poverty or struggling to avoid it amid rising prices and food shortages. Law enforcement in the U.S. kills an average of 1,000 people per year or over three people per day. Trillions are spent on endless wars that kill massive numbers of civilians and destabilize entire regions.

The concept of human rights has been stripped of all meaning by the US and the West to serve hegemonic ambitions. Criticisms of China’s zero-COVID strategy have nothing to do with the welfare of the Chinese people. The overwhelming majority of people in China support their government. This support has only grown since China launched its people’s war against COVID-19 more than two years ago. It is therefore critical that the propaganda war against China is challenged at every turn and condemned for its role in fueling racism and militarism.

The real human rights disaster is right under the collective noses of Western media pundits. All that’s needed is a mirror. But Western media serves as the arm of misinformation for big capital, making so-called “journalists” and commentators accomplices in a dangerous U.S.-led New Cold War on China.