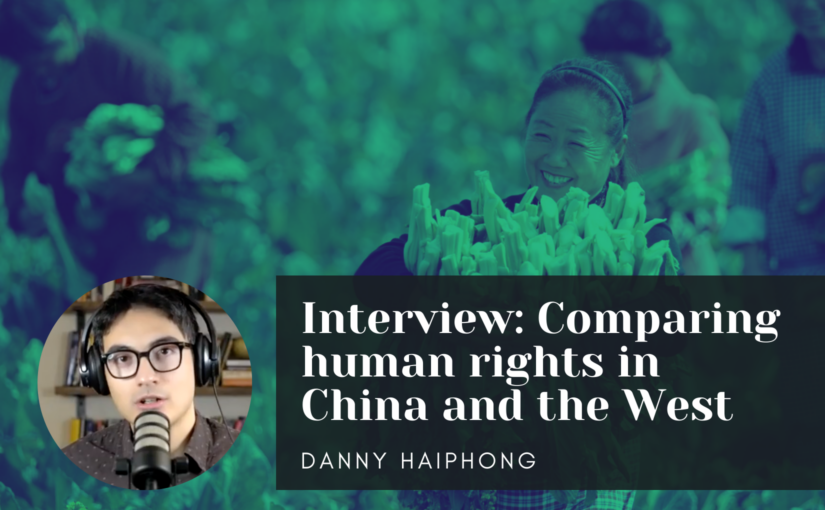 We are very pleased to republish this interview given by our Co-Editor Danny Haiphong to Global Times. In his interview Danny compares the very different approaches to human rights in China and the US. He notes how the US constantly raises generally spurious charges regarding the state of human rights in other countries, especially in China, in an attempt to distract attention from its own abhorrent human rights record. This can especially be seen in the contrasting approaches around Covid-19. In China, people and saving human lives come first whereas in the richest country on earth millions are without health care.

To help understand China’s progress in the past decade, the Global Times (GT) has launched a weekly series of interviews with scholars from home and abroad, presenting a holistic view of China’s governance philosophy. The following is an interview with Danny Haiphong (Haiphong), an independent journalist in the US and co-editor of Friends of Socialist China as well as a founding member of the No Cold War international campaign, on how China has made human rights protection a priority and how it has taken human rights moral high grounds.

GT: The US Department of State issued the 2021 Country Reports on Human Rights Practices on April 12, of which 90 pages are used to criticize China’s human rights conditions. At the same time, 2021 was considered to be the US’ most fatal year in history with more than 460,000 Americans killed by the coronavirus last year. Why does the US care more about human rights of China and other countries than its own record?

Haiphong: The US has politicized human rights for several reasons, none of which have anything to do with genuine concerns about the wellbeing of people. Constant speculation about human rights elsewhere provides a distraction from the shortcomings of the US’ own political and economic system. The US possesses an abhorrent human rights record. An average of three Americans per day are killed by US law enforcement. Nearly one million Americans have died of COVID-19. US wars abroad have taken the lives of millions and destabilized entire regions.

Human rights are also an integral component of US foreign policy. Any nation deemed a threat to US hegemony is condemned for human rights violations. Often, the allegations are unfounded. This is certainly the case in relation to China. The US has spread insidious lies about the so-called human rights violations in China’s Xinjiang Uygur Autonomous Region and Hong Kong Special Administration Region (HKSAR) to justify sanctions and military encirclement. The US’ politicization of human rights is not only hypocritical, but a true danger to humanity.

GT: Since the outbreak of the epidemic, China has prioritized the protection of people’s lives, what kind of human rights views do you think this reflects?

Haiphong: China’s approach to human rights is people-centered. People come first. China’s dynamic zero-COVID strategy is a case in point. Human life is the top priority. This priority has mobilized the entire society in a successful war against COVID-19 which has kept the death toll very low.

This doesn’t mean tradeoffs do not exist. The protection of human life amid a deadly pandemic means that uncertainty and hardship are inevitable. But it is the people-centered human rights approach which keeps China and its legitimate leadership, the Communist Party of China, forward on the path to becoming a modern socialist country by 2050.

GT: How do you see the influence the “coexistence with the virus” policy has had on the US and other Western countries? Western media are attacking and smearing China’s zero-COVID strategy. Why do they suggest China should also “lie flat” in its fight against the epidemic?

Haiphong: The politicization of COVID-19 in the US and other Western countries has created a public opinion crisis. Not only have large numbers of people been misinformed about COVID-19, but many have been convinced that China is to blame for their disastrous conditions. The truth is that the US and its Western allies neglected their domestic and global obligations to properly address the pandemic in the interests of humanity. Now these same countries want to see China plunged into a crisis through the abandonment of its successful strategy to contain the pandemic.

GT: Chinese President Xi Jinping has emphasized unswerving adherence to China’s path of human rights development, saying living a happy life is the biggest human right for the people. Over the past years, many surveys conducted by Western institutions showed Chinese people’s rising levels of satisfaction with the government’s performance. What does this demonstrate? How do you comment on China’s human rights views?

Haiphong: Widespread popular satisfaction with China’s government is an indicator of legitimacy. China’s socialist governance system serves the people. Human rights development is thus much broader in China than in the West. Economic freedom, or the freedom to a livelihood without poverty, hunger, homelessness and instability is a top priority.

China’s socialist governance system has built a foundation of legitimacy with the people by serving their needs and giving them real reasons to believe that their lives will be better than prior generations.

China’s own human rights views are driven by deep experience with other political systems. During the “century of humiliation,” various political models were imported from the outside without success. This includes the colonial and feudal systems in the 19th century and the Western democratic model in the early 20th century. Only the socialist conception of human rights has been capable of bringing prosperity and a better life to the Chinese people.

One further note. Legitimacy and human rights development in China isn’t a paternalistic affair. The interests of the people not only drive policy in China but the Chinese people possess numerous mechanisms to participate in the running of the country. This means that while China prioritizes economic human rights, political human rights play an important role in facilitating a balanced and harmonious society.

Haiphong: The West has for centuries been driven by a model of development that places profit accumulation over the rights of the people. And it isn’t just a benign profit that drives all development in the West, but capitalist profit which tends to concentrate wealth in the hands of a few private investors and monopolies. The anarchy of the market reigns supreme, and it is private monopoly capital which essentially dictates government policy. People’s need for housing, gainful employment, and healthcare are viewed as profitable ventures in and of themselves. This means that their administration is built around exploitation rather than human development.

The US, for example, is the so-called richest country in the world yet has millions of people without healthcare, a place to live, or a job that can satisfy the basic needs of survival. Hundreds of thousands of people sleep on the street each night, and still more find themselves filing for bankruptcy due to medical debt. Students attending university carry with them the weight of more than a trillion in collective student loan debt to private loan servicers and banks. Political parties in Washington DC hold the view that these issues are incapable of being resolved but that private military and financial institutions should be subsidized in the hundreds of billions. The US political system doesn’t just ignore the needs of the people, it proactively worsens the economic situation for the majority.

GT: What is the significance of China’s human rights proposition for redefining human rights worldwide, especially for developing countries to explore their own path in human rights development and protecting people’s fundamental rights?

Haiphong: China’s position on human rights provides a model for countries with shared histories of Western-imposed colonialism and development. Sovereignty and respect for self-determination are prerequisites for these countries to choose their own development paths. Unfortunately, due to unilateral measures such as sanctions and unequal trade arrangements, the US and the West have prevented many countries the opportunity to exercise sovereignty in their development paths. This has caused great suffering and strife worldwide.

China’s approach to human rights prioritizes sovereignty and the right to development, and these principles have been applied to the implementation of socialism with Chinese characteristics. Economic development serves everyone, not just rich investors inside or outside of China. Furthermore, China’s economic growth has not been achieved through isolationism but rather robust cooperation with all countries on the basis of equality. Developing countries seeking to both exercise their sovereignty while also reaping the benefits of increased global connectivity can look to China as a model of how the rights of the people do not need to be sacrificed for economic growth and vice versa.

One thought on “Interview: Comparing human rights in China and the West”