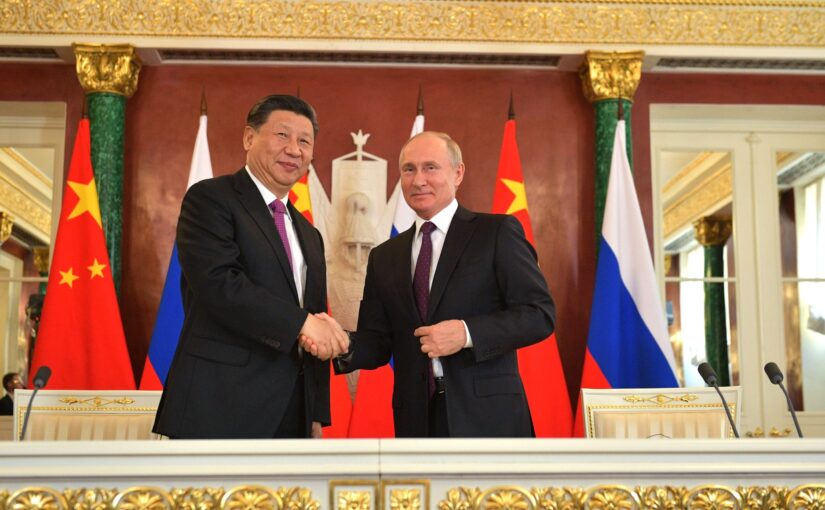 This thoughtful piece by Palestinian journalist and author Ramzy Baroud, originally carried in Counterpunch, examines the growing ties of solidarity and cooperation between China and Russia, and contextualizes these within the complex global struggle between US hegemony and multipolarity. Baroud writes that what Beijing and Moscow are working to achieve is “a long term political strategy that they hope would ultimately lead to a multipolar world.”

The meeting between Russian Foreign Minister Sergey Lavrov and Chinese Foreign Minister Wang Yi, in the Chinese eastern city of Huangshan on March 30, is likely to go down in history as a decisive meeting in the relations between the two Asian giants.

The meeting was not only important due to its timing or the fact that it reaffirmed the growing ties between Moscow and Beijing, but because of the resolute political discourse articulated by the two top diplomats.

In Huangshan, there was no place for ambiguity. Lavrov spoke of a new ‘world order’, arguing that the world is now “living through a very serious stage in the history of international relations” in reference to the escalating Russia-Ukraine/NATO conflict.

“We, together with you (China) and with our sympathizers,” Lavrov added with assuredness, “will move towards a multipolar, just, democratic world order.”

For his part, Wang Yi restated his country’s position regarding its relations with Russia and the West with precise words, some of which were used before in the February 4 meeting between Russian President Vladimir Putin and his Chinese counterpart, Xi Jinping. “China-Russia cooperation has no limits … Our striving for peace has no limits, our upholding of security has no limits, our opposition towards hegemony has no limits,” Wang said.

Those following the evolution of the Russia-China political discourse, even before the start of the Russia-Ukraine war on February 24, will notice that the language employed supersedes that of a regional conflict, into the desire to bring about the reordering of world affairs altogether.

Though the readiness to push against US-led western hegemony is inherent in both countries’ political objectives, rarely did Moscow and Beijing move forward in challenging western dominance, as is the case today. The fact that China has refused to support western economic sanctions, condemn or isolate Russia is indicative of a clear Chinese forward thinking policy.

Moreover, Beijing and Moscow are clearly not basing their future relation on the outcome of the Ukraine war alone. What they are working to achieve is a long term political strategy that they hope would ultimately lead to a multipolar world.

Russia’s motives behind the coveted paradigm shift are obvious: resisting NATO’s eastern expansion, reasserting itself as a global power and freeing itself from the humiliating legacy of the post-Soviet Union. China, too, has a regional and global agenda. Though China’s ambitions are partly linked to different geopolitical spheres – South and East China Seas and the Indo-Pacific region – much of Beijing’s grievances, and priorities, overlap with those of Moscow.

Aside from the direct economic interests between Russia and China, who share massive and growing markets, they are faced with similar challenges: both are hoping to gain greater access to waterways and to push back against US-western military advancements in some of the world’s most important trade routes.

It was no surprise that one of Russia’s top strategic priorities from its war with Ukraine is to widen its access to the Black Sea, a major trade hub with a sizable percentage of world trade, especially in wheat and other essential food supplies.

Like Russia, China too has been laboring to escape US military hegemony, particularly in the Indo-Pacific. The exponential rise in the Chinese military budget – estimated to grow by 7.1% in 2022, speaks of the way that China sees its role in world affairs, now and in the future.

The US trade war against China, which was accelerated by former US President Donald Trump, was a clear reminder to Beijing that global economic power can only be guaranteed through an equal military might. This realization explains China’s decision to open its first overseas military base in Djibouti, in the very strategic Horn of Africa, in 2017, in addition to Beijing’s military moves in the three artificial islands in the South China Sea, and its latest military deal with Solomon Islands in the South Pacific.

While the Russian and Chinese motives, as enunciated by top officials on both sides are clear – to “move towards a multipolar world order” – the US and its allies are not motivated by a specific, forward thinking political doctrine, as was often the case in the past. Washington simply aims to contain the two rising powers as stated in the yet-to-be officially released 2022 National Defense Strategy (NDS). According to the NDS, “the growing multi-domain threat posed by the (People’s Republic of China) PRC” is the primary challenge to US interests, followed by the “acute threats” posed by Russia.

Considering the complex interests of both Russia and China, and the fact that the two countries are facing the same mutual enemy, chances are the war in Ukraine is merely a prelude to a protracted conflict that will manifest itself through economic, political and diplomatic pressures and even outright wars.

Though it is premature to speak about the future of this global conflict with certainty, there is little doubt that we are now living in a new era of global affairs, one which is fundamentally different from the decades that followed the dissolution of the Soviet Union.

Equally true, we also know that both China and Russia will be important players in shaping that future, which could indeed push us away from US-western hegemony and “towards a multipolar world order”.

2 thoughts on “‘Towards a multipolar world order’: is this the end of US hegemony?”