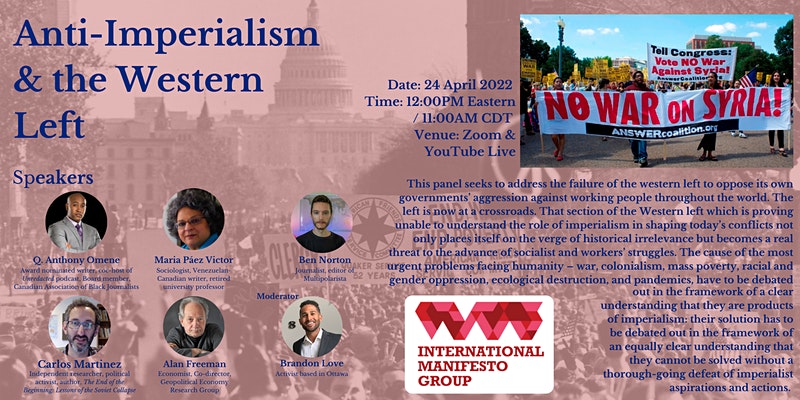 At this International Manifesto Group webinar on Sunday 24 April 2022, our co-editor Carlos Martinez will be speaking about the failure of much of the Western left to seriously engage with Chinese socialism.

An anti-imperialist left is emerging in the West. However, they are derided by both liberals and leftists alike. The left’s failure to grasp the central importance of imperialism in today’s divisive geopolitical landscape leads to support for wars of aggression, uncritical regurgitation of unfounded or spurious propaganda claims, and support for far right currents in other countries that claim to stand for ‘democracy’.

The conditions are ripe for socialist organizing and agitation, but class struggle rages within the left when it should be waged by the left. The left is thus now at a crossroads. That section of the Western left which is proving unable to understand the role of imperialism in shaping today’s conflicts not only places itself on the verge of historical irrelevance but becomes a real threat to the advance of socialist and workers’ struggles.

This event will provide a space for the emerging anti-imperialist left to set out its case openly, compare experiences in different countries, and develop its proposals for dealing with the issues confronting today’s world within the atmosphere of mutual respect and tolerance which today’s anti-imperialist framework is fostering.

Ajamu Baraka is the national organizer of the Black Alliance for Peace and was the 2016 candidate for vice president on the Green Party ticket. Baraka serves on the Executive Committee of the U.S. Peace Council and leadership body of the United National Anti-War Coalition (UNAC). He is an editor and contributing columnist for the Black Agenda Report and contributing columnist for Counterpunch. He was recently awarded the US Peace Memorial 2019 Peace Prize and the Serena Shim award for uncompromised integrity in journalism.

Carlos Martinez is an independent researcher and political activist from London, Britain. His first book, ‘The End of the Beginning: Lessons of the Soviet Collapse’, was published in 2019 by LeftWord Books. His main area of research is the construction of socialist societies, past and present. He is a co-editor of Friends of Socialist China and co-founder of No Cold War.

Mariá Páez Victor, PhD is a sociologist, born in Venezuela, now retired from university teaching who is dedicated to writing. As well, she is a frequent commentator on issues related to Latin American history and politics and she has participated in numerous events on TV, radio and in public meetings. In addition she has her own weekly radio program about Venezuela in the Spanish language community radio of Toronto.

Q. Anthony Omene is an award-nominated writer, whose columns appear in Maclean’s and The Globe and Mail, and host of the Unredacted podcast with Glenn Greenwald. In addition, he is a board member of the Canadian Association of Black Journalists. He is on Twitter @qaomene.

Alan Freeman is the co-director, with Radhika Desai, of the Geopolitical Economy Research Group (GERG) at the University of Manitoba. He was an economist at the Greater London Authority between 2000 and 2011, where he held the brief for the Creative Industries and the Living Wage. He wrote The Benn Heresy, a biography of British politician Tony Benn, and co-edited three books on value theory. He is honorary life vice-president of the UK-based Association for Heterodox Economics and a Vice-Chair of the World Association for Political Economy.

Benjamin Norton is a journalist, writer, and filmmaker, he is the founder and editor of the independent media outlet, Multipolarista, where he reports in both English and Spanish. His journalism focuses primarily on US foreign policy and geopolitics. He has reported from many countries around the world and is currently based in Latin America.

Moderator – Brandon Love is an activist from Ottawa, Canada. Wherever he lives, he has always participated in class struggle, including labour organizing, tenants rights and international solidarity initiatives, including the Foodsters United union drive in Toronto and the unsuccessful University of Waterloo BDS referendum to sever ties with Israeli academic institutions.

2 thoughts on “Webinar: Anti-Imperialism and the Western left (24 April)”