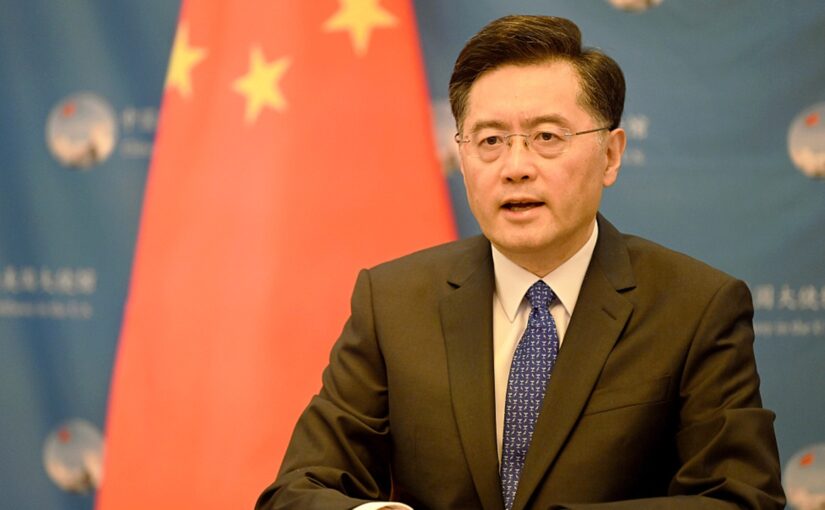 China’s Ambassador to the US, Qin Gang, is making persistent efforts to explain to the American public his country’s real position regarding the conflict in Ukraine and to counter disinformation. Below is his article, published on April 18 by The National Interest, a leading US conservative bimonthly International Relations magazine, founded in 1985.

Ambassador Qin notes that: “To end this unwanted conflict as soon as possible is more important than anything else.” He notes that Europe is the focus of the current crisis and the continent needs not only an end to the fighting but also a fundamental answer to the question of securing lasting peace and stability and a balanced and effective security architecture.

Qin Gang contrasts the eastward expansion of NATO, which contributed in no small measure to today’s tragic situation, with the development of the Shanghai Cooperation Organization, in which framework China has amicably settled all its historic border disputes with Russia and the countries of Central Asia, both of which may be traced to 1996, and notes: “Different choices lead to different outcomes.”

The Ukraine crisis is agonizing. One more minute the conflict lasts means one more hardship for the 43 million Ukrainian people. To end this unwanted conflict as soon as possible is more important than everything else.

China loves peace and opposes war. It advocates upholding international law and universally recognized norms governing international relations and respecting the sovereignty and territorial integrity of all countries, including Ukraine. China supports all efforts that can deliver a ceasefire and relieve the humanitarian crisis on the ground, and will continue to play a constructive role toward this end.

Lessons must be learned. While working to end this conflict, we must also give some serious thought to the changes brought by the crisis and the path forward in its aftermath.

The postwar international system is coming under the heaviest pressure since the Cold War. The once-in-a-century pandemic, the Ukraine crisis and the unparalleled sanctions, the spiraling inflation and a looming recession, all these have sounded the alarm for the “boiler” of the international system. It is high time for us to reduce the pressure, not the other way round, for our shared world.

Europe is the focus of all the pressure in the crisis. Its prospects of stability and prosperity were apparently damaged overnight and replaced by huge uncertainties. To reverse this situation, there must be not only an end to this war, but also a fundamental answer to lasting peace and stability in Europe, and a balanced, effective, and sustainable philosophy and architecture for its security.

The contrasting shifts over the thirty years on the two ends of the Eurasian continent should shed some light on how security can be ensured for Europe and the world. After the Cold War, when Europe chose to use NATO’s eastward expansion to preserve security, on the other side of the continent, China, Russia, and Central Asian countries initiated the Shanghai Five mechanism, in an unprecedented exploration of a new security philosophy and model. In 1996, when President Bill Clinton for the first time announced a timetable for NATO enlargement in Detroit, China, Russia, Kazakhstan, Kyrgyzstan, and Tajikistan signed the Treaty on Deepening Military Trust in Border Regions, resolving China’s boundary issues with former Soviet Union countries once and for all and putting an end to military standoff along the China-Soviet Union border. The cornerstone of the Shanghai Cooperation Organization has thus been laid, and the “Shanghai spirit,” i.e., mutual trust, mutual benefit, equality, consultation, respect for cultural diversity, and pursuit of common development, has been established. As such, neighborly friendship and common peace have prevailed among China, Russia, and Central Asian countries. As is shown by history, different choices lead to different outcomes.

The unfolding Ukraine crisis has also put America’s relations with both Russia and China to new tests. In 1992 when Russian President Boris Yeltsin paid his first visits to the United States and China following the Soviet disintegration, the countries agreed not to regard each other as adversaries, which basically put Russia’s bilateral relations with the United States and China on the same level. Over the past thirty years, the China-Russia relationship has made great progress, but it is still based on non-alliance, non-confrontation, and non-targeting of third countries. China has been and will remain an independent country that decides its position according to the merits of each matter, immune from external pressure or interference. The claims about China’s prior knowledge of Russia’s military action or China providing military aid to Russia are pure disinformation. Had similar conflicts happened in other places or between other countries, China’s position would be no different. At the same time, U.S.-Russia relations are sliding into a new Cold War, which is not in the interest of either China, the United States, or Russia, and is not what China wants to see. After all, a worse Russia-U.S. relationship does not mean a better China-U.S. relationship, and likewise, a worse China-Russia relationship does not mean a better U.S.-Russia relationship, either. More importantly, if the China-U.S. relationship is messed up, that does not augur well for Russia-U.S. relations or the world.

Disturbingly, as the crisis continues, some people are wielding the stick of sanctions against China to coerce the renunciation of its independent foreign policy of peace. Some are clamoring about a “Beijing-Moscow Axis” in a dangerous misinterpretation of China-Russia relations, asking China to bear responsibility for the crisis. Some are linking Taiwan to Ukraine and playing up the risks of a conflict across the Taiwan Strait. Still others, for all the lessons that should be learned, are fanning up misunderstanding, confrontation, and insecurity in Asia-Pacific, without a modicum of care if this region might follow in the footsteps of Europe. These words and actions are not helpful to resolving the crisis or ensuring the stability of China-U.S. relations. Dragging everyone down does no good to our future generations.

Ukraine knows best how the postwar international system was all built. Over seventy years later today, its future is again closely linked with that of the world. Though we are not able to reach consensus, for the moment, on what kind of international system we want, last century’s “scourge of war, which twice in our lifetime has brought untold sorrow to mankind,” and the following four decades of estrangement should enlighten us that we all live in a shared world with a shared future. It is out of the question for any country or country bloc to have absolute security while ignoring other countries’ security. Without respect, trust, mutual accommodation, and cooperation, the world would never be peaceful. It does not need and cannot afford another Cold War in the aftermath of the Ukraine crisis.

China and the United States should not only work together to tackle the warming of the global climate, but also seek maximum common ground in addressing the cooling of the international political climate. Differences in perception of the crisis do not justify groundless accusations or pressure and should not hinder our joint efforts to end the crisis. I have been staying in close communication with American colleagues on it. At the same time, China and the United States should take a long-term view and have pragmatic and constructive dialogue, coordination, and cooperation for what comes our way outside and after the crisis. In this way, we can bring about an arrangement for lasting peace and stability in Europe acceptable to all parties; properly resolve other global hotspots; prevent and address the crisis’ impact on the global economy and trade, finance, energy, food, and industrial and supply chains; and minimize the losses for the economy and people’s livelihood. The current international system is not perfect. It needs to make progress with the times, and China is committed to supporting and contributing to this process, not undercutting or wrecking it. In the final analysis, our shared goal is lasting peace, universal security, and common prosperity for the 1.8 billion Chinese and American people and the 7.8 billion world population. This is the historical responsibility for China and the United States as two major countries.

One thought on “Qin Gang: The Ukraine crisis and its aftermath”