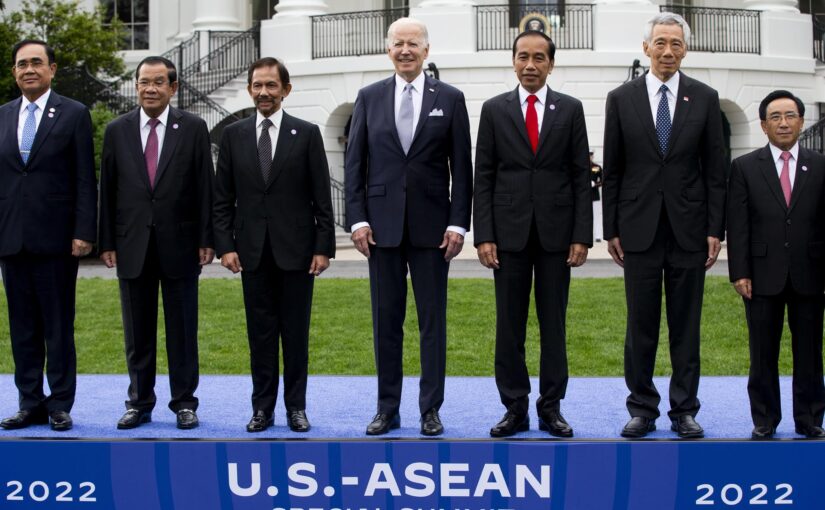 This article by Austin Ong, originally published in the Manila Times, discusses US President Biden’s visit to Asia and the recent US-ASEAN summit, during which the US offered $150 million in infrastructure development funding to the countries of Southeast Asia. Ong notes that this is a very small amount compared with China’s ongoing investment in the region, which includes the recently-completed high-speed railway link between Laos and Yunnan, alone worth $6 billion. The US has also failed to offer ASEAN members tariff-free access to its domestic market; whereas China was a strong proponent of the Regional Comprehensive Economic Partnership (RCEP), which came into force at the beginning of this year. The US’s economic commitments to Asia pale in comparison to its military commitments such as the AUKUS trilateral pact, which will provide nuclear-powered submarines to Australia. This indicates very clearly that while China focuses on win-win cooperation and development, the US continues to pursue hegemony.

Optimism was replaced with frustration and disbelief after the much feted hosting by Washington of visiting Asean leaders resulted only in a paltry $150-million pledge. For such a vital region at the heart of great power competition, the sum is infinitesimal. It is hard to imagine how this small drop in the bucket will get to be apportioned to 10 countries with pressing developmental needs raring to recover from a pandemic.
Biden’s meeting with Asean leaders is the first meeting of a US President since 2017, was rescheduled twice, and came a year after Blinken did not show up for his first virtual meeting with the Asean ministers which the US had arranged. The US blamed it on a technical glitch as Blinken was enroute to Israel. Twelve days later, China’s foreign minister Wang Yi met with his counterparts in person at the Special Asean-China Foreign Ministers’ Meeting in China.

Furthermore, Biden’s pledge speaks volume of where the US is focused on — security — much to the dismay of regional countries which hoped the US will step up in providing economic goods to provide a counterweight to China. Of America’s $150 million commitment to the region, $60 million will go to deepening maritime cooperation led by the US Coast Guard ships in the South China Sea. Absent robust dialogue and crisis management mechanisms, this may only raise tensions and trigger an arms build-up in the region and chances for miscalculations.

The US only allotted $40 million in infrastructure. To put things in perspective, under China’s decade-old Belt and Road Initiative, the China-funded high-speed railway in Laos which opened last December is worth $6 billion. The two friendship bridges donated by China to help decongest Manila’s notorious traffic are already worth $150 million, in addition to over $350 million in grants for various livelihood projects from 2016 to 2021. Billions of dollars worth of major infrastructure and development projects across the Philippines, Brunei, Cambodia, Malaysia, Vietnam, Thailand, Indonesia, even in Myanmar are being fast-tracked. While some projects face issues and may even get derailed, they are still light years away from what the US is investing in the region.

In pandemic and vaccines assistance, the Philippines alone received over $150 million worth of donations from China, compared to the US donating $200 million for the 10 Asean countries, after the US initially blocked exports delivery in the early critical months and hoarded vaccines more than 3 to 5 times what their entire population needed.

The US also committed $15 million to enhance the region’s public health capacity for detecting potential epidemics. China in November 2021, promised $1.5 billion in the next three years to fight the health contagion and fuel economic recovery for her Asean neighbors.

The US is trying to play catch up with China in the region and such a minuscule financial backing does not contribute to shoring up its appeal. The US is coming in too late, offering too little and expecting a lot.

Washington’s actions, including the push for military alliances like the Quad and Aukus with countries surrounding China, all have an implicit mission of containing China. This stands in stark contrast to the White House’s public statements that it does not seek to force Asean states to choose sides. Sarang Shidore of Quincy Institute calls the US policy to contain China as “building rival bloc-like structures that bypass Asean” (Asean’s new math: Washington should think addition, not subtraction).

While more economic initiatives from the US are being discussed including the Blue Dot Network, Build Back Better World and the Indo-Pacific Economic Framework (IPEF), experts have criticized the programs as lacking in details and reciprocity for open market access from the US. The US efforts to provide alternatives to China’s Belt and Road and related initiatives generate spotlight but have not gained traction. No pipeline of proposed projects have come out.

With RCEP taking effect early this year and countries in the region looking at free trade as a vehicle to propel post-pandemic recovery, the US’ indifference to FTAs stands in opposite to China and the region’s receptiveness toward them. Beijing even expressed interest to join the CPTPP, whose early iteration the US championed during President’s Obama’s time.

FTAs can facilitate market access and standard setting that Asean and other countries in the Asia-Pacific aspire for. Anything less will attract only marginal attention. As such, two members of the Japanese Congress, Taro Kono and Takashi Yamashita in a Brookings panel early this month argued that US should forego the Indo-Pacific Economic Framework and instead rejoin TPP soonest.

Proximity is one factor, but responding to the region’s demands sooner, whether on non-intrusive no-strings attached infrastructure capital or life-saving vaccines, is the more salient driver behind the deepening Asean-China ties. This is despite the persistence of disputes.

Philippine President Rodrigo Duterte skipped the Asean-US Summit to give way to the incoming government. But while he may go down in Philippine history as the only sitting president not to have paid a visit to Washington, his stance finally elicited the attention and respect of the country’s treaty ally.

His complaints against the US sending second-hand assets, allegedly reconditioned assets that were scheduled to be junk, compelled Washington to relax restrictions on the Philippines, as well as other regional countries, to procure more advanced defense platforms. The successes of Duterte’s gambit to play off great powers against one another as well as other developing countries have emboldened more nations to follow suit — Vietnam, Indonesia, Venezuela, Iran, Saudi Arabia, Pakistan, India, Russia, etc. The latest to join the fray was the small Pacific archipelago of the Solomon Islands whose recent security pact with China put it on the map and made it the object of ceaseless courting from Australia, the US, New Zealand and Japan now pledging to ramp up diplomatic presence, aid and investments. The same occurred in the Philippines where investments even from traditional partners multiplied after China became a major investor in the country under Duterte’s independent foreign policy.

Constant-critics of Duterte’s China policy like Albert del Rosario, Raisa Robles of SCMP, Richard Heydarian, Solita Monsod of Inquirer, former justice Antonio Carpio continue to denigrate the billions of actual new investments and assistance from China to the Philippines while quiet on the US unbelievable paltry pledges. Carpio criticized Duterte for settling for $1.2 billion worth of investment from China in 2020, and Monsod belittled China’s early vaccine donations. Their simplistic analysis fails to account for multidimensional, positive factors created from the better relations including the tens of thousands of employment generated, the multiplier effect of peace and development that will benefit generations as a result of Duterte’s managing the South China Sea disputes and focusing on functional cooperation; most importantly, the pandemic assistance that protected and saved the lives of our kababayans.