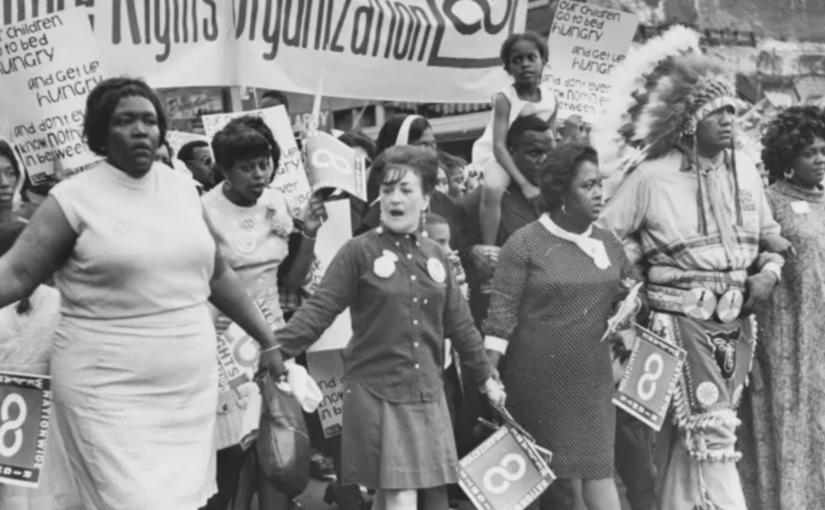 We are pleased to reproduce this article by Sharon Black, originally carried by Struggle/La Lucha in the United States. Sharon begins with moving personal recollections of her participation, as an 18-year-old working-class woman, in the Poor People’s Campaign initiated by Dr. Martin Luther King Jr. in May 1968, and goes on to outline the very different approaches to poverty by the US and China. Having outlined the steadily worsening situation in the US, she states: “All this contrasts with the Communist Party of China (CPC) and the Chinese government, which made eradicating poverty one of its major goals.”

According to Sharon, China’s historic eradication of extreme poverty is not solely due to China’s economic growth, as important as this has been. However: “Without a conscious effort by the Chinese government, economic growth in [and] of itself would not have solved the problem.”

Having outlined the concrete steps taken by China, including young urban students and professional workers giving up relatively comfortable lives to go and participate in the anti-poverty campaign in rural villages, Sharon likens this to Cuba’s literacy campaign. Of course, comparisons could also be made with the millions of Chinese youths, including future President Xi Jinping, who went down to the countryside in the 1960s and 1970s.

Sharon concludes: “What cannot be argued is that socialist China is going in the opposite direction of the capitalist West… Our challenge is to learn from what China has done.”

I was barely 18 years old. Pregnant with my son and filled with the kind of hope that only the young possess — who know little of the hardships ahead — I participated in the Poor People’s Campaign.

My neighbors were from Appalachia; my mother from the coal mining area of eastern Pennsylvania. As much as I was motivated by empathy for the people I loved who were my family and neighbors, it was the civil rights movement that lit a fire inside of me.

So when I saw a flier posted by a group of Vista workers soliciting people to go with them to the D.C. Poor People’s Campaign, I called immediately.

I lied to my parents and pretended to stay with a friend, then left for Washington with a small group of older, certainly more sophisticated, participants. Most of them were graduates from the University of Delaware.

I was the youngest, the only woman at the time. I was awkward; I couldn’t accompany them to bars because of my age, had no money and had never eaten in a restaurant.

It wasn’t surprising that my new companions found me a burden and deserted me once we arrived in Washington. I never saw them again until we made the trip back to Wilmington, Delaware.

Instead, it was older Black participants, mostly from the South, who took me under their wing. I was taught how to piece together boards, hammer nails and build Resurrection City.

Much of the mud, rain and even the speeches remain a blur. The only thing that stood out was the kindness and care of those Black residents of Resurrection City who took a rather young white kid under their guidance and shelter.

The aims of the Poor People’s Campaign were never realized. But that is another story.

The United States has the largest economy in the world, yet it is slipping in every indice of quality of life. At last count, 37.2 million people were living in poverty, an increase of 3.3 million from 2020.

Life span in the U.S. has declined for the first time by over two years. The U.S. has slipped from the 43rd place in the world to 64th in life expectancy.

Class divisions and racism have widened. In essence, “The rich have gotten richer and the poor poorer.”

Aid to Dependent Children, founded in 1935 through the Social Security Act, which later became Aid to Families with Dependent Children, the country’s main welfare program, was ended in 1997 by the Bill Clinton administration. Notwithstanding the program’s history of racism, this was a terrible blow.

It’s important to recount this history because mothers, particularly Black mothers from the Welfare Rights Organization, played a leading role in the Poor People’s Campaign and in fighting for poor people’s rights.

This move also had a secondary impact of taking the teeth out of church- and religious-led protests, since religious institutions were now competing for government funds.

What was taking place, going back to the Reagan administration, was a trend popularly referred to as “neoliberalism.” It included gutting government spending on social programs, eliminating price controls, deregulating and privatizing services in favor of “free market” capitalism.

The nonprofit sector has grown ever larger, but it has served more to enrich its executive directors and top leaders than to serve the poor. It has attracted young workers who are looking for what they consider “meaningful work,” only to encounter poor compensation, resistance to union drives and high burnout rates.

This trend toward private charities and nonprofits was meant to replace the government’s responsibility to serve people. The vast amount of wealth produced in this country continued to shift to the war machine, the forces of repression and to fill the pockets of bankers and billionaires.

All of this contrasts with the Communist Party of China (CPC) and the Chinese government, which made eradicating poverty one of its major goals.

In 1949, the newly-formed People’s Republic of China was faced with momentous tasks. The majority of the population were desperately poor peasants plagued with famine and death.  There was almost no industrialization or education.

Edgar Snow documents many of the incredible obstacles that faced the CPC in his book, “Red Star Over China.” He gives a firsthand account, and puts human faces to the staggering statistics and suffering of both the peasants and the Red Army.

The commitment to wiping out poverty has its roots in the early period of the People’s Republic of China and remains important.

Decades later, in 2012, China’s President Xi Jinping, general secretary of the CPC Central Committee, vowed to eradicate the vestiges of extreme poverty by 2020.

Despite the incredible challenges posed by the COVID-19 pandemic, the Chinese government proudly proclaimed the achievement of this herculean effort on November 23, 2020.

The World Bank stated that China has lifted over 850 million people out of poverty. “With this, China has contributed close to three-quarters of the global reduction in the number of people living in extreme poverty.”

When humanity looks back, this will be one of the biggest stories of this century.

How did China do it?

It would take a much longer article to explain in full. Of course, one factor is China’s economic growth. But that’s just a part of the equation. Without a conscious effort by the Chinese government, economic growth in of itself would not have solved the problem.

This government effort was remarkably systematic from top to bottom, from the central government to rural villages to individual families. Every poor family is tracked and assessed individually. Villagers voted to determine who among them should be declared in poverty and when poverty was alleviated.

Massive apartment buildings were constructed to relocate people in villages where soil erosion or other conditions made it impossible to sustain a higher standard of life. Contrast this with the continual destruction of public housing and Section 8 programs in the U.S. In addition to deep housing subsidies, China’s poor families are guaranteed furniture and televisions.

Emphasis is put on providing stipends and funds for education.

Young urban students and workers, many of them professionals, moved from their relatively comfortable lives to rural villages to participate in this campaign. It reminded me of Cuba’s literacy campaign that uplifted young women teachers and tasked them with going into the countryside and the mountains to teach peasants to read and write, making Cuba one of the first Caribbean nations to eradicate illiteracy.

Going in opposite directions

The capitalist West, particularly the U.S., remains cynical and dismisses all that China has accomplished. The media distorts and quibbles about statistics. But this is only possible if you have never experienced how poverty crushes human potential.

What cannot be argued is that socialist China is going in the opposite direction of the capitalist West. Under the leadership of the Communist Party of China, the government is taking on the responsibility of uplifting the population.

In contrast, the U.S. government has shed itself of responsibility for the welfare of the people.  Instead, its only duty is to the imperialist banks and billionaires and increasing the repressive apparatus from police to prisons to Pentagon.

Our challenge is to learn from what China has done.