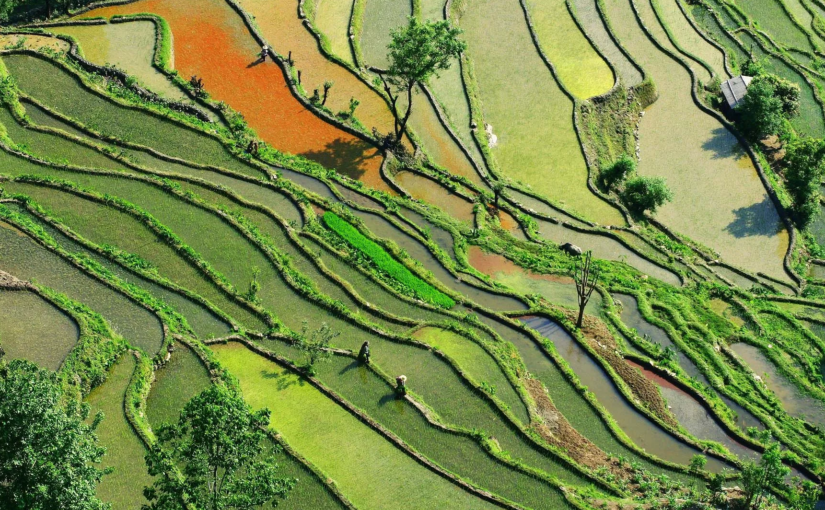 We are republishing this important and informative article by Joe Scholten, originally published on the Multipolarista website.

Joe explains that, due to a number of factors, the world is facing a chronic rise in food prices and mounting fear of famine. However, “Beijing has shown how to strengthen food sovereignty, and simultaneously fight poverty with a multi-pronged approach that combines state-funded agricultural cooperatives, stockpiling of nonperishable staples, a crackdown on waste, and government investment in new technologies.”

China’s agriculture, he notes, “is still significantly organized on the basis of cooperative farming. Nearly half of farms are agricultural cooperatives.” Between 2013-2019, the Chinese government rebuilt more than 10,000 primary supply and marketing cooperatives. By 2019 they were present in 95% of the country’s towns – up from just 50% in 2013. This policy, he argues, was crucial to the success of the anti-poverty campaign, as were such key elements of China’s socialist construction as state ownership of land and five-year plans.

Other features of the Chinese experience cited in the article include the system of ‘Two Assurances and Three Guarantees’, ensuring adequate food reserves, the introduction of penalties for commercial food waste, the development of such innovative technologies as salt water-tolerant rice crops, and further strengthening the rights and interests of the working class by, for example, extending unionisation to new sectors of the economy, such as delivery workers for popular apps.

The Covid-19 pandemic, the ensuing supply-chain crisis, and high rates of inflation around the world have led to rising food prices and fears of famine.

These cascading and interlocking problems have pushed governments to prioritize economic self-sufficiency and food security.

China is leading the way in this struggle. Beijing has shown how to strengthen food sovereignty, and simultaneously fight poverty, with a multi-pronged approach that combines state-funded agricultural cooperatives, stockpiling of nonperishable staples, a crackdown on waste, and government investment in new technologies.

While the United Nations warns of “the specter of a global food shortage,” the Chinese government has provided countries with an alternative model to meet the needs of their people.

At the beginning of the Covid-19 pandemic, on February 24, 2020, Chinese President Xi Jinping delivered a speech on food security, outlining a series of both short- and long-term steps that would ensure a stable food supply for the major city of Wuhan.

At the time, Wuhan was under a harsh lockdown. Addressing food security was critical.

The state’s program was ultimately successful. Although there were some problems with delivery, no one faced starvation during this harsh lockdown. The government managed to feed tens of millions of people.

The strategy used in Wuhan was repeated later on in the pandemic. When cities like Xi’an or Shanghai faced lockdowns, local officials created similar networks of support to ensure that their tens of millions of residents had stable food supplies.

While more 1 million people have died from the virus in the United States alone, Beijing’s zero Covid policy has saved countless lives. And it had the added benefit of strengthening China’s food sovereignty at a moment when the world was on the verge of a global crisis.

The proxy war in Ukraine and the devastating Western sanctions imposed on Russia have led to concerns about global food supply. As of the end of 2021, Russia and Ukraine were responsible for nearly 30% of the world’s wheat exports.

Sanctions have created a significant burden for agricultural exports, as firms that attempt to pay for or facilitate payment to Russian businesses fear being targeted. Moreover, the fighting has shut down many ports used for export in Ukraine.

This has led to warnings from the United Nations and other international institutions that, as soon as late 2022 and early 2023, there could be food shortages and even famines among the poorest nations in the world, while food prices skyrocket and become increasingly unaffordable in wealthier nations.

These growing crises have made understanding China’s policy of food sovereignty even more relevant.

In theory, such a daunting global crisis of food production could be an existential threat to China. It has an enormous population with scarce arable land, and faces the possibility that a virus could hurt the capacity for workers to engage in agricultural work, while an external food crisis could hamstring the ability for the state to import supplies.

Despite these material factors, however, there is a relatively low likelihood that China will face such a food crisis. How is this possible?

Well before the pandemic began, Xi Jinping made a clarion call: “Chinese people should hold their rice bowls firmly in their own hands, with grains mainly produced by themselves.”

This quote was a clear call for food self-sufficiency – exactly the kind of policy that the US-dominated World Bank has fastidiously sought to curtail throughout much of the Global South.

Based on its model of socialism with Chinese characteristics, Beijing has pursued a development path that has made objective strides in food security, much to the displeasure of neoliberal financial institutions like the World Bank.

The People’s Republic of China has made these enormous strides in food security in part because it is the largest agricultural subsidizer on the planet. This has led to attacks from the United States via the neoliberal World Trade Organization, which opposes Beijing’s agricultural subsidies.

China’s remarkable accomplishments in agricultural production might be puzzling to some. After all subsidy isn’t unique to China; indeed, it’s a common feature of capitalist agricultural practices as well.

However, there are distinct qualitative differences in Chinese agriculture practices that further show how it has made such resounding progress.

China’s agriculture is still significantly organized on the basis of cooperative farming. Nearly half of farms are agricultural cooperatives, which more than 2.2 million legally registered.

When President Xi came to power in 2013, he brought back a Mao Zedong-era system of state-run cooperatives to help fight poverty in rural areas while boosting agricultural output.

From 2013 to 2019, the Chinese government rebuilt more than 10,000 primary supply and marketing cooperatives (SMCs), the South China Morning Post reported.

The Post summarized, “Expanding that network is a key feature of Xi’s plan to revitalise the countryside – where the Communist Party of China has its roots – and deliver on his pledge to lift millions of people out of poverty, and narrow the income gap between rural and urban dwellers.”

The results of this program have been staggering. State-supported cooperative farming has successfully been able to revitalize communities.

This agricultural program was an essential part of how Beijing lifted more than 800 million people out of extreme poverty.

The Chinese government has also directed its policies at trying to to reduce inequality between urban and rural areas.

Much of this framework food security would be difficult to replicate without two key elements of China’s socialist construction: state ownership of land, and economic five-year plans.

Indeed, “food and energy security” is one of the five main categories listed in Beijing’s 14th five-year plan.

Additionally, the socialist state has a policy of “Two Assurances and Three Guarantees,” which the government describes as “assurances of adequate food and clothing, and guarantees of access to compulsory education, basic medical services and safe housing for impoverished rural residents.”

As a result, Beijing has taken concrete measures to ensure that the public is prepared for just the kind of food crisis that the world is seeing unfold.

The Chinese government has likewise long ensured that it has adequate agricultural reserves to weather a crisis. Reports indicate that Beijing has stockpiled enough rice and wheat to sustain the entire country for at least 18 months, in the event of an extreme crisis.

In the latter half of 2020, the first year of the Covid-19 pandemic, when the virus was nonexistent in China, the Communist Party passed laws requiring governments at local and state levels to have adequate reserves of staple foods and cooking oils.

These laws stipulate that grains and oils are to be released in events of disasters, significant price disruptions, or other large emergencies.

Crackdown on food waste and state investment in technology

At the same time, the Chinese state has taken measures to ensure that food waste is curtailed, that efforts to innovate in their food production technology are supported, and that workers who are essential in the process of delivering food are protected.

China has also systematically invested in new agricultural technologies, such as CRISPR. Beijing has adopted technology to its own material conditions, even finding ways to grow salt water-tolerant rice crops, to ensure that rising sea levels do not impact yields in agriculture.

This is all part of a state-driven process, to ensure that food security is maintained.

Even US corporate media outlets like Bloomberg have begrudgingly admitted that China is quickly becoming a global leader in biotechnology.

The People’s Republic of China has additionally expanded unions to commercial food workers and delivery workers, for popular apps like Didi and Meituan, to make sure that workers have higher wages and better conditions, and that food delivery can be maintained through a well paid and loyal workforce.

This has all been part of what Beijing calls its “People’s War on Covid-19,” whereby labor unions, non-governmental social institutions, and state bodies work together to collectively fight the virus.

China is similarly creating a framework to wage a people’s war on hunger and food insecurity.

The Chinese socialist system produces results. It utilizes state power to organize the people, gauges material conditions to determine long-term needs, and meet them. It succeeds in these goals where other political systems are failing.

US set up for food crisis disaster

The contrast with the US system could hardly be more stark.

Washington helped to foment the food crisis in the first place, with draconian sanctions that are will it hard for poor countries to buy wheat and fertilizer.

Food prices are rising rapidly inside the United States, due to a combination of general inflation and blatant price-gouging by corporations.

Crop growing cycles are off to a bad start in 2022, with US agricultural production lagging behind its five-year average in planting goals.

Farmers in the United States have raised alarms about the possibility of serious problems in food security.

Meanwhile, Congress and US political leaders have failed to create a long-term strategy to address domestic food security needs. Instead, they have proposed a haphazard food aid plan that experts say does not apportion adequate sums of money.

In a revealing comment at NATO headquarters in March, US President Joe Biden conceded, “With regard to food shortage, yes, we did talk about food shortages. And – and it’s going to be real. The price of these sanctions is not just imposed upon Russia, it’s imposed upon an awful lot of countries as well, including European countries and our country as well.”

All signs indicate that a food crisis is coming. And unlike leaders in capitalist nations, the leadership of the Communist Party of China has used foresight, long-term planning, and methods of socialist construction to prepare.

In much the same way that the People’s Republic of China successfully handled Covid-19, it is setting itself up to weather the crisis domestically – while still showing international solidarity abroad.

As this crisis arises, let it not be forgotten that socialist leadership in China was responsible for ensuring its people were protected, and that it took concrete steps to ensure that it’s people would be safe, while the leadership of capitalist countries left their people to die.