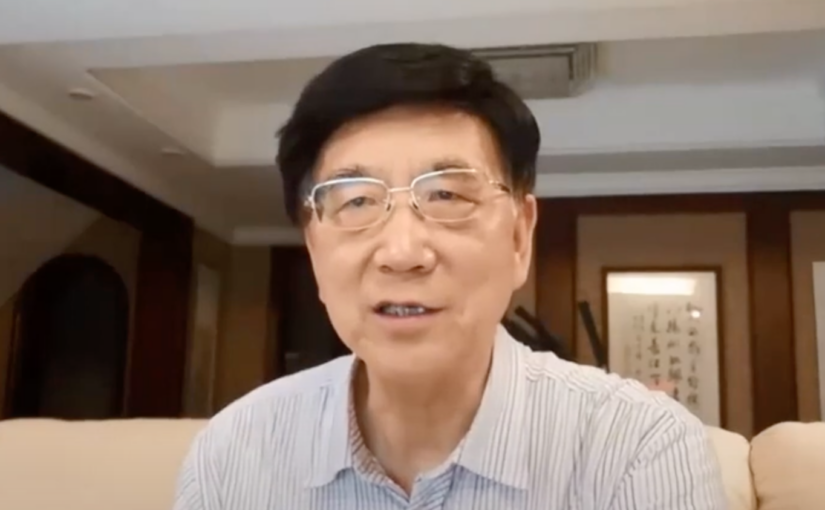 We reproduce below the text of a speech given by Cheng Enfu – former president of the Academy of Marxism at the Chinese Academy of Social Sciences (CASS), currently Academician of CASS, principal professor of the University of the Chinese Academy of Social Sciences, and president of the World Association for Political Economy (WAPE) – at the recent book launch we co-hosted for Elias Jabbour and Alberto Gabriele’s ‘Socialist Economic Development in the 21st Century’. In his brief but comprehensive speech, Professor Cheng describes the trajectory of socialist economic development, starting with the extraordinary achievements of the Soviet Union, and continuing with China’s “three miracles”: the period of early socialist construction, which broke China out of underdevelopment and “fundamentally reversed the trend of China’s marginalization in the world system”; the Reform and Opening Up period from 1978, within which China became a major economic power; and the construction of socialism with Chinese characteristics in the new era since 2013, in which China’s “scientific, technological, economic and ecological construction has jumped to a new level.” Cheng discusses the escalating New Cold War, which is the imperialist camp’s response to China’s rise and humanity’s multipolar trajectory, concluding that “bad things can also become good things” and that the socialist countries – China, Vietnam, Laos, Cuba and the DPRK – will continue to achieve greater economic and social development in the face of the US-led onslaught.

Alberto Gabriele and Elias Jabbour’s monograph on the economic development of several socialist countries in the 21st century deserves careful reading and great attention. In the following, I will address a few potentially controversial points on the subject of economic development in China and the Soviet Union, as two representative examples of socialist countries, in response to the misconceptions prevailing in the world.

The first point: the Soviet Union has made great achievements in economic and social development. This year is the 100th anniversary of the establishment of the Soviet Union, which is worth commemorating, but because of the betrayal and subversion of the Soviet Union by the Gorbachev and Yeltsin leadership groups, the Western world generally denies the achievements in economic and social development of the Soviet Union. In my opinion, after the October Revolution, the Soviet Union, under the leadership of Lenin, established the dictatorship of the proletariat and the centralized democratic system, carried out large-scale economic, social, educational and cultural construction, repelled the armed aggression of 14 capitalist countries, and developed a series of theories and successful practices for building socialism in one country under the siege of capitalist countries.

Guided by Lenin’s ideas, the Soviet Union saw great achievements in economy, politics, education, science and technology, culture, health, people’s livelihood, society, ecology, and national defense. Without the invasion and near destruction of the Soviet Union by fascist Germany with its monopolistic bourgeois totalitarian politics, or if the socialist Soviet Union had not been dismantled by a coup d’état, the economic strength and comprehensive national power of the Soviet Union at the beginning of the 21st century would have caught up with and surpassed that of the United States, which relied on internal exploitation and external plunder.

The second point: China’s economic and social development before the reform and opening up created what is called the “first miracle.” After comparing and analyzing a large number of domestic and foreign statistics, we can make this objective judgment: during the 100 years since the First Opium War, the economic and social development of the old China was extremely slow, and in general it showed a backward, defeated and poor state with decaying society, and the gap between its economic and social development and that of the major countries in the world had been widening. In the first 30 years of the new China, despite the unfavorable conditions such as lack of experience in socialist construction, economic blockade by capitalist countries, rapid population growth, and aids to other countries, the pace of economic and social development was greatly accelerated, accompanied by a qualitative leap in the quality and structural layout of development, fundamentally reversing the trend of China’s marginalization in the world system and narrowing the economic gap with major countries in the world. The socialist market economy is not a policy because of previous failure but rather a successor stage to the previous one, with the goal of better and faster development than the traditional planned economy. As Yale professor Maurice Meissner points out, “In the post-Mao era, it has become fashionable to bloviate about the blemishes of the historical record of the Mao era and to keep quiet about the achievements of the time.” “In fact, far from being the era of economic stagnation that is now commonly perceived, Mao’s era was one of the greatest modernization in world history, comparable with the most intense industrialization in several major latecomers in modern times, such as Germany, Japan and Russia.” The “two miracles” created in the 70 years of the People’s Republic of China has been officially recognized in China.

The third point: China’s economic and social development after the reform and opening up has created its “second miracle” and China has entered the rank of the “sub-middle rich and powerful” in the world. As of 2012, China’s industrial output and foreign exchange reserves have leaped to the first place in the world, total economic volume has steadily ranked second in the world, education, science, technology and health care have developed significantly, people’s livelihood has tremendously improved from subsistence to moderately well-off, Hong Kong and Macao have successfully returned to China, and its international status has been raised.

The fourth point: the construction of socialism with Chinese characteristics in the new era since 2013 is creating the “third economic miracle.” China has entered the stage of moderately rich and strong country as a “quasi-center” in the world economic system. Its scientific, technological, economic and ecological construction has jumped to a new level. Moreover, through the “Belt and Road Initiative,” “BRICS,” “Shanghai Cooperation Organization,” “Asian Infrastructure Investment Bank” and other international cooperation, it has contributed Chinese wisdom and provide Chinese solutions for human development, promoted the construction of a community of shared future for humanity, with increased international appeal and influence. I confidently predict that if China basically achieves modernization in 2035, it will become one of the countries of “sub-high wealth and power” in the “center” of the world economic system; if it achieves full modernization in 2050, it will be one of the top countries in the world economic system, which will break the monopoly of the world economic system by the old and new imperialist and developed capitalist countries.

The fifth point: the future socialist economy will develop better in the process of countering Western hegemony. Lenin’s conclusion that “imperialism is war” is not outdated. Global and regional hegemonism also easily leads to war. The Russo-Ukrainian war is a conflict triggered by the five illegal eastward expansions of NATO as an aggressive military group headed by the United States, and is the result of Russia’s being forced to counter the US-Western hegemony, which will negatively affect the entire world economy and people’s livelihood, except for the US military-industrial complex, which has greatly profited. Since the U.S. and Western monopoly capitalist economy cannot compete with China’s socialist economy, in recent years the U.S. and the West have intensified their ganging up around China, cobbled together the Indo-Pacific version of NATO, established the Indo-Pacific economic framework organization against China, and tried to provoke China’s civil war for the unification of Taiwan through political and military provocations in order to impose comprehensive sanctions against China and hinder China’s socialist modernization process. However, bad things can also become good things. China has implemented a new development pattern based on domestic circulation and dual (domestic and international) circulation, enhancing the degree of self-reliance, autonomy, self-sufficiency and self-improvement of the national economy, and continuously establishing and improving new scientific and technological chains, industrial chains, supply chains and economic and trade chains, which leads to better development of China’s socialist national economy and people’s livelihood.

I believe that the socialist market economies of Vietnam and Laos, and the socialist planned economies of Cuba and North Korea, which are illegally blockaded by the U.S. and the West, will all achieve greater economic and social development in the 21st century.