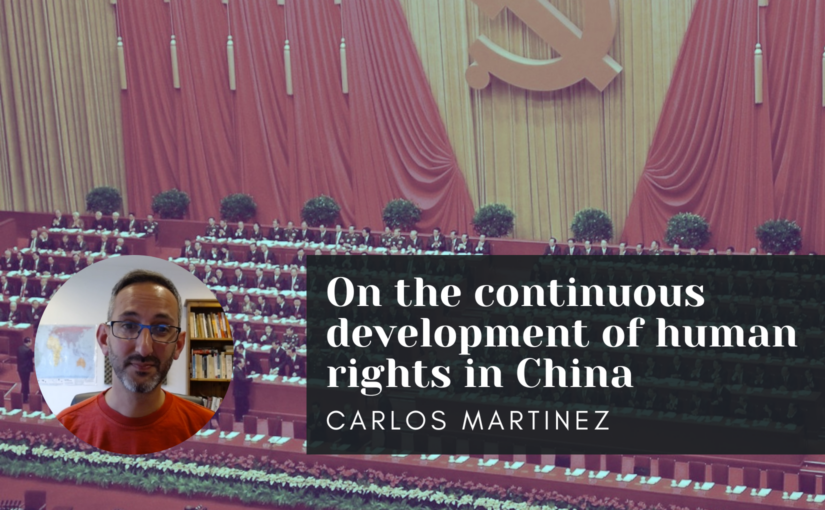 Friends of Socialist China co-editor Carlos Martinez was recently interviewed on the subject of democracy and human rights for the Chinese edition of People’s Daily. We publish below the English translation.

“The Chinese government listens to the voices of the people, is committed to meeting the needs of the people, and promotes the continuous development of the cause of human rights.” Recently, British writer and political commentator Carlos Martinez said in an interview with this reporter that the Chinese Communist Party leads the Chinese people. Unprecedented progress has been made in finding a human rights development path that suits the national conditions of the country. What is important is that China breaks the narrow definition of human rights in the West, “China’s human rights protection is extensive and sufficient”.

Martinez was deeply impressed by the whole process of people’s democracy in China. He said that this concept highlights the essential difference between socialist democracy with Chinese characteristics and Western capitalist democracy. The Chinese side believes that if the people are awakened only when they vote, and then go into a hibernation period, they only listen to hype slogans during elections, they have no right to speak after the election, they are favored during canvassing, and they are left out after the election. Such a democracy is not true democracy. Martinez agrees.

“The participation of ordinary Chinese people in running society is higher than that of Western countries. In terms of representing the basic interests of ordinary people, the Chinese government has done a far better job than Western governments.” Martinez said that in the whole process of China’s development of people’s democracy, the people have always enjoyed democratic rights, not limited to elections; available to all social classes, not limited to certain groups. China’s democratic system has its own historical background. It can ensure the enjoyment of democratic rights by the broadest masses of people and provide important support and guarantee for social governance.

Martinez said that China’s achievements lie not only in achieving rapid economic growth, but also in the government’s wholehearted commitment to improving the living standards of ordinary people. The Chinese government pays attention to poverty eradication, environmental protection, education development, etc., to improve people’s lives in general. “People’s demands are reflected in the government’s work, which is the real people’s democracy.” Martinez said.

“Eliminating absolute poverty in a developing country with a population of more than 1.4 billion is an extraordinary achievement and has historical significance.” Martinez specifically mentioned that due to the impact of the new coronavirus epidemic and geopolitical factors, poverty is rising. The Chinese government has historically solved the problem of absolute poverty and made important contributions to human development and progress. He said that while carrying out targeted poverty alleviation, China has actively shared its experience with other countries and regions, participated in many poverty alleviation projects in Africa, and carried out various cooperation with developing countries, which has promoted the sustainable development of these countries and regions.