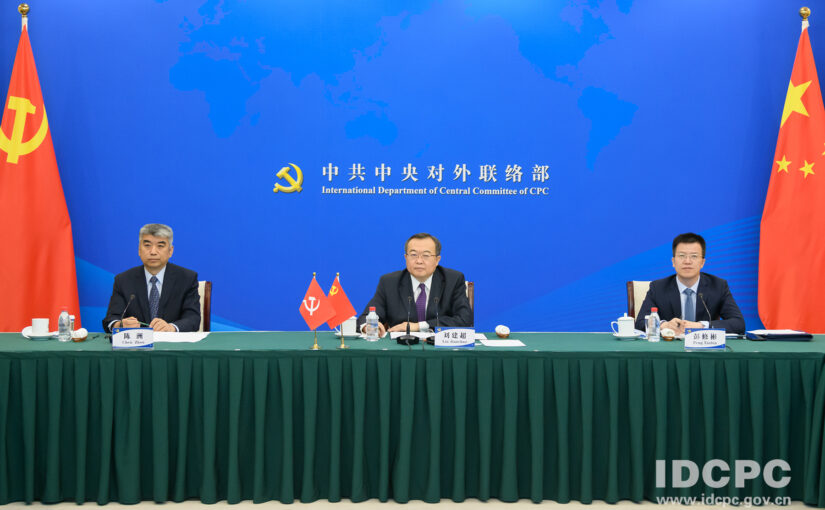 Liu Jianchao was recently appointed as the Minister of the International Department of the Central Committee of the Communist Party of China, succeeding Song Tao, who completed his term of office. On being informed of his appointment, in a message to a relevant official of the International Department, Friends of Socialist China wrote:
“We wish him every success in his responsible work, and good health, and stand ready, as ever, to maintain and develop our greatly valued friendship and our close cooperation.”

Comrade Liu’s first announced engagement in his new role was to meet separately with the Ambassadors of the four other socialist countries to China, namely the Democratic People’s Republic of Korea (DPRK), Vietnam, Laos and Cuba. In a brief report, the International Department noted that the meetings, “focused on exchanging views on consolidating and deepening the traditional friendship between China and the four countries, and relations between the ruling parties of China and the four countries, continuously promoting cooperation in various areas, and jointly boosting the development of socialist causes in the new era.”

Following the calls, the CPC signed memoranda of exchange and cooperation with both parties.

Some days later, Liu also held a video call with Nepalese Foreign Minister Narayan Khadka, who is also the leader of the Nepali Congress party.

The following report on the online meeting with the Nepali communist leaders was originally carried on the website of the CPC International Department.

Liu said that China and Nepal are friendly neighbors linked by mountains and rivers, and development partners sharing the same destiny. In October 2019, General Secretary Xi Jinping paid a historic visit to Nepal. China-Nepal relations were upgraded to the China-Nepal strategic partnership of cooperation featuring ever-lasting friendship for development and prosperity, and entered a new era of rapid development. The Chinese side is willing to work with the Nepali side to implement the important consensus reached by the leaders of the two countries, deepen mutual political trust, actively promote practical cooperation in major projects and various fields under the framework of the Belt and Road Initiative, and push the friendship across the Himalayas to new heights.

Liu said, the CPC and the Communist Party of Nepal (Maoist Center) and the Communist Party of Nepal (Unified Marxist Leninist) share similar philosophies and close ties. The CPC is willing to strengthen inter-party exchanges, promote “political parties plus” cooperation, enhance people-to-people bond, and respect each other’s core interests and major concerns, so as to play a role in facilitating the healthy and stable development of China-Nepal relations. The 20th CPC National Congress will be held in the second half of this year, which will draw a blueprint for China’s development in the next phase and will certainly provide new impetus for the development of China-Nepal relations. The CPC is willing to strengthen exchanges with political parties in Nepal on state governance and administration.