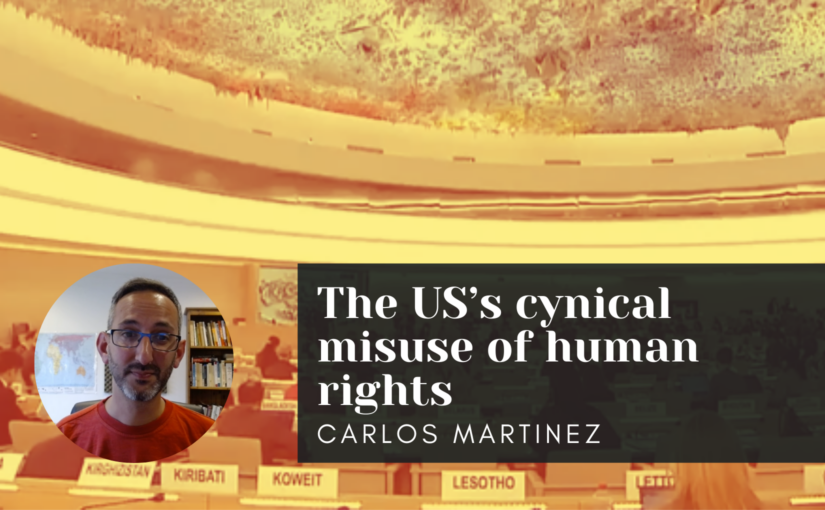 This article by Carlos Martinez discusses the themes emerging from the recently-concluded 50th Session of the UN Human Rights Council, in particular the stark disparity in the conduct of the imperialist powers (plus a few hangers-on) and the majority of the world’s countries. While the US and its allies continue their campaign to cynically use human rights issues to slander certain countries and promote their New Cold War, the rest of the world increasingly demands the depoliticisation of human rights. This article was originally published on CGTN.

Global politics seems to be moving in two opposite directions. On the one hand, the US and its closest allies are stepping up their efforts to consolidate and expand US hegemony. On the other hand, the countries of the developing world, the socialist countries and the formerly-colonised countries are increasingly united in their efforts to promote multipolarity, multilateralism, sovereign development, and democracy in international relations.

These two contrasting approaches have been evident during the 50th Session of the UN Human Rights Council, which concluded recently on 8 July.

A group of 47 countries issued a joint statement to the session, making all sorts of lurid accusations against China regarding its treatment of the people of the Xinjiang Uyghur Autonomous Region. The countries signing up to this slanderous statement were the “usual suspects” of the US, Western Europe, Japan, Australia, Canada and a handful of others.

Out of 30 NATO members, the only countries not to sign were Turkey, Greece and Hungary. All the ‘Five Eyes’ signed. Meanwhile, not a single one of the approximately 50 Muslim-majority countries put their names to this statement, although it purportedly represents the interests of Uyghur Muslims.

Another joint statement was issued at the session, on a similar theme, but this time with a far more diverse group of signatories. This statement, delivered by Cuba, affirmed that “respect for sovereignty, independence and territorial integrity of states and non-interference in internal affairs of sovereign states represent basic norms governing international relations.” It furthermore reminded the Human Rights Council that “Hong Kong, Xinjiang and Tibet related issues are China’s internal affairs that brook no interference by any external forces.”

This statement was signed by 69 countries from around the world, including a significant number of Muslim-majority countries (including Algeria, Bangladesh, Egypt, Iran, Iraq, Pakistan, Palestine and Syria).

While the purpose of the first statement was to engage in a diplomatic attack on China, the purpose of the second was to expose the dangerous trend of politicisation of human rights; the attempts to use human rights issues as a means of undermining other countries and separating the world into ideological blocs in an escalating New Cold War.

US attempts to use human rights as a weapon of Cold War are, of course, nothing new. The Reagan administration placed a very close human rights spotlight on its enemies, particularly the Soviet Union, whilst conveniently ignoring (or encouraging) the extensive rights abuses committed by its allies, most notably the apartheid regime in South Africa and the far-right Contra militia in Nicaragua, waging war against the Sandinista government.

The most dangerous misuse of the human rights narrative has been to generate broad support for the West’s wars of devastation. The example of Libya stands out: prior to the launch of the NATO bombing campaign in March 2011, politicians and journalists in the West carried out a propaganda blitz, condemning the human rights record of the Libyan government led by Muammar Gaddafi.

Not wanting to tell the truth about human rights in Libya (that, for example, it had the highest Human Development Index in Africa, along with universal free healthcare and education) these people found themselves inventing lies. The notion that Gaddafi was preparing a massacre in Benghazi, or was forcibly enlisting sub-Saharan soldiers, was used to drum up popular support for a military campaign that killed tens of thousands of people and reduced a country to rubble.

The overarching motivation for the current slander campaign against China, launched by the Trump administration and enthusiastically taken up by the Biden administration, is to win broad approval for the US-led New Cold War; a political project that has absolutely nothing to do with promoting human rights, and everything to do with containing China and preventing the emergence of a multipolar order.

What the 50th Session of the Human Rights Council serves to make clear, however, is that most of the countries in the world are no longer willing to play this game. It is increasingly clear to all thinking people that the US has its own very serious human rights problems that it should focus on. As Chinese Ministry of Foreign Affairs spokesperson Wang Wenbin put it recently, the US “is becoming a country afflicted by systemic violation of human rights” which is “in no position to make irresponsible remarks on the human rights conditions in other countries.”

In the US, poverty levels are rising and millions do not know where the next meal is coming from. Over half a million people are homeless. Racial discrimination is rampant – just a few days ago Jayland Walker, an unarmed 25-year-old black man, was shot over 60 times by police in Akron, Ohio. The US has by far the highest incarceration rate in the world – more than six times higher than that of China. The bodily autonomy of women is under attack with the recent Supreme Court decision overturning Roe vs Wade.

It is commendable that US politicians and journalists want to take up the issue of human rights, but they don’t need to stretch their imaginations by creating lies about China. A much better idea would be to turn their attention to the growing human rights crisis at home.