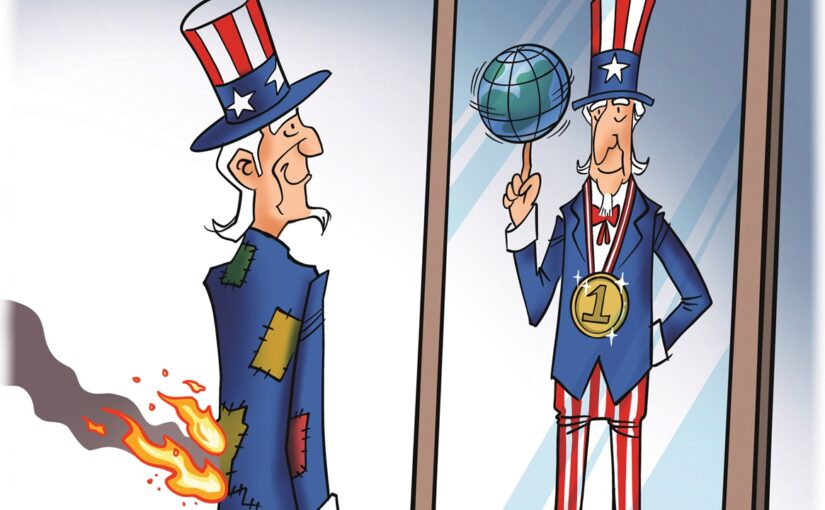 In this article written for the Global Times, lawyer and peace activist Dan Kovalik provides a big-picture analysis of the major trends in geopolitics. Dan points out that for the last several decades, while the US and its key allies have oriented their economies largely to finance capital and the military-industrial complex, the socialist countries of Asia “are lifting hundreds of millions out of poverty and building sustainable infrastructure in their own countries and around the world.” It would benefit the people of the US to work with, and learn from, China and other developing countries rather than treating them as enemies.

We are now witnessing a great realignment and transformation. The so-called “American Century” has given way to a new century in which other countries are asserting themselves and taking the lead in the world. This new world order seemed quite unlikely several decades ago when the USSR collapsed and it appeared, and the US certainly declared, that the United States would be the one, dominant power for many decades to come. Ironically, it was the US’ very attempt to maintain this status which has inexorably led to its losing it, and to its decline as a nation.

While ironic, this was all quite predictable. Indeed, the Democratic Party, in its 1900 party platform, warned of this very outcome when it stated, “[w]e assert that no nation can long endure half republic and half empire, and we warn the American people that imperialism abroad will lead quickly and inevitably to despotism at home.” But no sooner were these words uttered than that the US embarked upon unprecedented empire-building beyond its already-giant mainland which itself was the product of a brutal settler-colonial project which displaced, subdued and killed millions of people already living from the Atlantic to the Pacific.

The US, of course, settled upon the instruments of war and violence to achieve its imperial aims. After all, the reasoning went, these had worked so well for it in building the nation to begin with. This addiction to unending expansion through costly wars, however, was not and is not sustainable. Indeed, in his farewell address in 1961, President Dwight D. Eisenhower, himself a former General, warned that the US republic was under threat, not from abroad, but from a growing “military-industrial complex” which was threatening to usurp democratic and civilian rule of the country.

More recently, in what sounded like a postmortem of the United States, Jimmy Carter told President Trump when discussing China in 2019 that the US is “the most warlike nation in the history of the world,” and that this has cost the US dearly.

As Carter explained, “We have wasted, I think, $3 trillion [on military spending since 1979]. … China has not wasted a single penny on war, and that’s why they’re ahead of us. In almost every way.

“And I think the difference is if you take $3 trillion and put it in American infrastructure, you’d probably have $2 trillion left over. We’d have high-speed railroad. We’d have bridges that aren’t collapsing. We’d have roads that are maintained properly. Our education system would be as good as that of, say, South Korea or Hong Kong.”

The results of all this have been disastrous. As just one example, Forbes magazine reported in 2020 that “54% of US adults 16-74 years old – about 130 million people – lack proficiency in literacy, reading below the equivalent of a sixth-grade level.” Forbes estimated that this functional illiteracy – on par with what we used to call Third World nations – was costing the US $2.2 trillion a year. It is also costing the US in terms of its ability to maintain an informed electorate which can meaningfully participate in an ostensibly democratic system.

The other factor leading to the decline of the United States has been the increasing usurpation of power by the monied interests which now control every facet of life in the country, including the very system of “democracy,” if one can still call it that. This was made possible by a decision of the least democratic branch of the US government, the Supreme Court, in its 2010 ruling in Citizens United v. Federal Electoral Commission which, in the words of the well-respected Brennan Center for Justice, “reversed century-old campaign finance restrictions and enabled corporations and other outside groups to spend unlimited funds on elections.”

The result is that US electoral positions now go to the highest bidders which in turn act on behalf of themselves and their super rich friends, and against the interests of the vast majority of the population who are forced to languish in poverty, ill-health and ignorance. Nowhere was this phenomenon better demonstrated than during the recent pandemic in which the US suffered the highest number of cases and deaths in the world while the measures imposed by the US government to ostensibly combat the pandemic ensured that the very rich became $4.5 trillion dollars richer at the expense of everyone else. This is the mark of a country that is not working as it should. The US is, indeed, a failed state, and it is failed by design so that the few oligarchs can rule in the breach created by the chaos.

While the US suffers this sad decline, countries in the East like China and Vietnam are rising. With their economies focused on meeting human needs, rather than on fueling war and the gross enrichment of the few, these countries are lifting hundreds of millions out of poverty and building sustainable infrastructure in their own countries and around the world. The US, rather than viewing these countries as adversaries or even enemies, should have the humility to learn from them and indeed work with them in creating a more just and prosperous world. This would require the US to radically change course and to focus on adopting peaceful means in its dealings with the world; on creating rather than destroying. It is my hope that the US can make this course correction before it is too late for all of us.