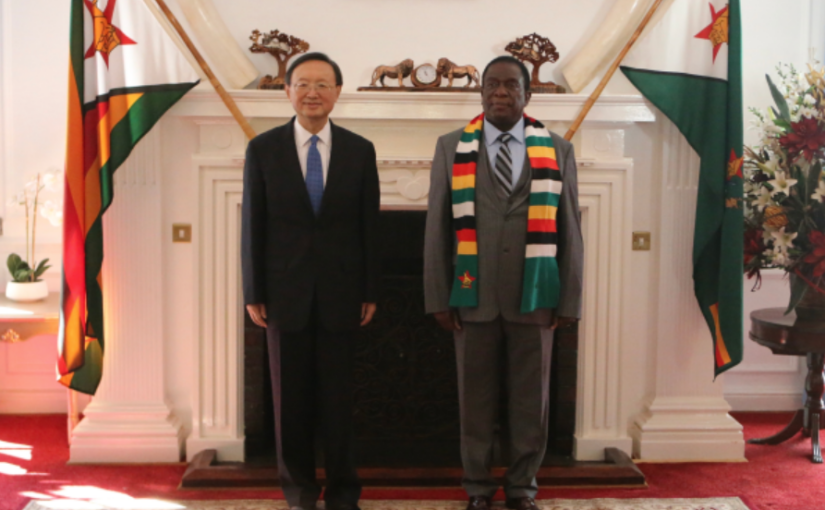 China’s top diplomat Yang Jiechi visited Zimbabwe and Mozambique at the beginning of July as the final part of a foreign tour that had previously taken him to Pakistan and the United Arab Emirates (UAE). China and the two southern African nations enjoy particularly close and friendly relations since Beijing extended all-out support to their armed struggles for national liberation against imperialism, colonialism and racism in the 1960s and 70s.

In a July 10 article entitled ‘Visit by China’s top diplomat underscores importance of Zimbabwe ties’, Hong Kong’s South China Morning Post (SCMP) observed that: “A trip to Harare this month by China’s top diplomat has underscored the importance of Beijing’s relationship with Zimbabwe, its firmest economic and diplomatic ally in Africa. Zimbabwe has been cut off from global capital markets in the two decades since the United States and some other Western nations imposed sanctions on Harare…leaving Beijing as the main financier of infrastructure projects such as hydroelectric dams, airports and roads.”

The paper quoted Yang as saying that China “stands ready to further strengthen all-dimensional exchanges with Zimbabwe, be it party to party, government to government, military to military or people to people”. It further noted that: “China provided arms and training to the guerrillas of the Zimbabwe African National Liberation Army during the armed struggle that toppled the country’s white minority government in 1980. Zimbabwean President Emmerson Mnangagwa…was among those trained by Beijing” and continued:

“At a meeting in Harare on July 3, Mnangagwa told Yang that if China had not vetoed a push by Western powers for the United Nations to punish Zimbabwe over the land reforms that evicted white farmers, the country could have been destroyed. ‘This speaks volumes of the solid relations between Zimbabwe and China,’ Mnangagwa said after the meeting. ‘In 2008, when the Western countries, the Americans and the British and their allies, wanted to invoke the United Nations Charter which [would have] allowed them to invade Zimbabwe, the Chinese exercised their veto. This is why we are still here and remain independent, so these are solid friends of Zimbabwe.’

“He said China also funded the upgrading of the Hwange 7 and 8 thermal power plants at an estimated cost of US$1.2 billion. The Chinese embassy in Harare said the Hwange expansion project is 88 per cent complete and is expected to add 600 megawatts to Zimbabwe’s national grid.

“China has also financed the building of major airports such as Robert Gabriel Mugabe International Airport in Harare and Victoria Falls International Airport… Tsingshan Group, through subsidiary Dinson Iron and Steel, is spending an estimated US$1 billion to build an iron ore mine and carbon steel plant capable of producing 2 million tonnes a year in Manhize, Mvuma – south of Harare – that will be the biggest steel plant in southern Africa.”

Earlier, on July 4, the SCMP reported that: “China is preparing to hand over a new US$140 million parliament building as a gift to Zimbabwe…The site at Mount Hampden, about 18km (11 miles) northwest of the capital Harare, heralds the start of a new city.” Noting that the complex, built by the Shanghai Construction Group, had been fully paid for by China as a gift to Zimbabwe, the paper wrote: “The contractors said the facility was now ready to be handed over, 3½ years after construction started on a project that employed more than 500 Chinese technicians and 1,200 local workers. ‘There is no doubt that the new parliament will become a landmark building in Zimbabwe and even in the whole of Southern Africa,’ Shanghai Construction Group manager Libo Cai said… ‘It will be yet another milestone for the China-Zimbabwe friendship which keeps getting stronger year after year.’”

In their meetings with Yang, both Zimbabwean President Emmerson Mnangagwa and Mozambican President Filipe Nyusi extended congratulations on the 101st anniversary of the founding of the Communist Party of China and wished complete success to the party’s forthcoming 20th National Congress. Yang told Nyusi that China and Mozambique had “forged a profound traditional friendship in the struggle against imperialism and colonialism.” They were both, he continued, “developing countries that adhere to independence.”

The following reports of Yang’s meetings with the Zimbabwean and Mozambican Presidents first appeared on the website of the Chinese Foreign Ministry.

On July 3, 2022 local time, Zimbabwean President Emmerson Mnangagwa met with Member of the Political Bureau of the CPC Central Committee and Director of the Office of the Central Commission for Foreign Affairs Yang Jiechi in Harare.

Yang Jiechi conveyed cordial greetings from President Xi Jinping to Mnangagwa. Yang Jiechi said, China and Zimbabwe enjoy a time-honored friendship. In recent years, the heads of state of the two countries have met and exchanged letters on many occasions, leading China-Zimbabwe relations to grow at a high level, constantly deepening political mutual trust and deepening and substantiating cooperation in various fields. This year marks the 40th anniversary of the establishment of inter-party relations between the ruling parties of the two countries. The two parties trust and support each other, laying an important political foundation for the all-weather friendship between China and Zimbabwe. China appreciates Zimbabwe’s important role in promoting in-depth Belt and Road cooperation between China and Africa. China is ready to further strengthen all-round exchanges between the two parties, governments, militaries and peoples and conduct in-depth exchanges of governance experience with Zimbabwe. China is ready to provide more support for Zimbabwe’s economic and social development.

Yang Jiechi said that factors of instability, uncertainty and insecurity are prominent in the current international situation. China recently held a High-level Dialogue on Global Development in the form of “BRICS Plus”, sending a positive signal that emerging markets and developing countries promote global development, unity and cooperation. China is willing to fully coordinate its position with Zimbabwe on multilateral affairs, jointly uphold the international system with the United Nations at its core and the international order underpinned by international law, and make the global governance system more just and equitable.

Mnangagwa asked Yang Jiechi to convey his sincere greetings to President Xi Jinping and extended warm congratulations on the 101st anniversary of the founding of the Communist Party of China (CPC). He wishes the 20th National Congress of the CPC this autumn a complete success. Mnangagwa said, the friendship between Zimbabwe and China has grown stronger as time goes by. Zimbabwe always bears in mind China’s firm support for the country’s efforts to safeguard national sovereignty and oppose foreign interference and sanctions, and thanks the Chinese side for its sincere assistance to Zimbabwe’s economic and social development over the years. Zimbabwe firmly adheres to the one-China principle and supports the Global Development Initiative and Global Security Initiative proposed by China. Zimbabwe stands ready to work with China to further deepen the synergy between development strategies, advance high-quality Belt and Road cooperation between Africa and China, safeguard true multilateralism together in the face of international changes, and jointly push bilateral comprehensive strategic cooperative partnership to a new level.

On July 4, 2022 local time, Mozambican President Filipe Jacinto Nyusi met with Member of the Political Bureau of the CPC Central Committee and Director of the Office of the Central Commission for Foreign Affairs Yang Jiechi in Maputo.

Yang Jiechi conveyed cordial greetings from President Xi Jinping to President Nyusi. Yang Jiechi said, China and Mozambique forged a profound traditional friendship in the struggle against imperialism and colonialism. In recent years, under the guidance of the two heads of state, China-Mozambique relations have developed in an all-round way. China firmly supports Mozambique in exploring a development path suited to its national conditions and safeguarding national security and stability. China is ready to conduct all-round exchanges with Mozambique, further deepen political mutual trust, support each other on issues concerning each other’s core interests and major concerns, actively advance Belt and Road cooperation, and push for more results in bilateral cooperation in infrastructure construction, agriculture, energy and other fields. China is willing to continue to support Mozambique in combating natural disasters and COVID-19, and further carry out cultural exchanges.

Yang Jiechi said, both China and Mozambique are developing countries that adhere to independence. China congratulates Mozambique on its successful election as a non-permanent member of the UN Security Council, supports Mozambique in playing a constructive role in maintaining international peace and security, and supports solving African issues in African ways. China is willing to work with Mozambique to make greater contributions to the stability, prosperity and development of Africa and the world.

Nyusi asked Yang Jiechi to convey his sincere greetings to President Xi Jinping and extended congratulations on the 101st anniversary of the founding of the Communist Party of China (CPC). He wishes the 20th National Congress of the CPC to be held this autumn a complete success. Nyusi said, the two parties and two countries enjoy traditional friendship and fruitful cooperation and are good partners of mutual trust. Mozambique sincerely thanks China for its long-term and active support for Mozambique’s economic and social development and its full support for the country’s fight against the pandemic. Mozambique is firmly committed to developing friendly cooperation with China and firmly pursues the one-China principle. Mozambique is ready to enhance mutual trust and friendship with China, deepen mutually beneficial cooperation within the framework of the Belt and Road Initiative and communication and coordination on international affairs, bring more benefits to the two peoples and jointly cope with the profound changes and challenges in the international situation.