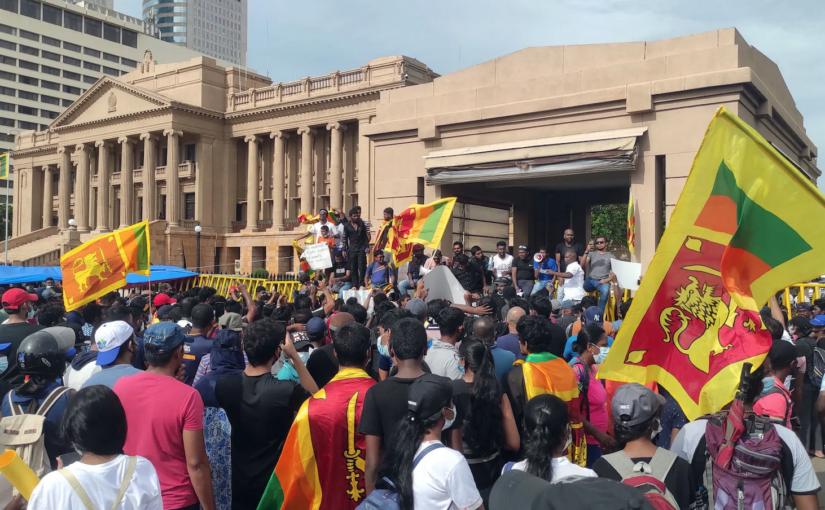 With world attention still focused on the multiple crises – political, economic, humanitarian – gripping the South Asian island nation of Sri Lanka, we are very pleased to republish this admirable and thorough article by our Advisory Group member Benjamin Norton, originally carried on Multipolarista. With the Sri Lankan situation being cynically distorted into a supposed example of alleged Chinese ‘debt trap diplomacy’, Benjamin makes clear that 81% of Sri Lanka’s external debt is owed to US and European financial institutions, along with those of Japan and India. China accounts for just 10%. Sri Lanka has already suffered the imposition of no less than 16 IMF structural adjustment programs – a key factor in the country’s economically parlous state.

Benjamin notes that the Sri Lankan protests have been “driven by skyrocketing rates of inflation, as well as rampant corruption and widespread shortages of fuel, food and medicine – a product of the country’s inability to pay for imports.” He considers claims that the popular protests constituted some kind of “anti-China uprising” in the former British colony to be “even more detached from reality” than those suggesting ‘debt trap diplomacy’ on the part of Beijing. With regard to that issue, he shows in detail how both the BBC and mainstream academics have debunked such notions.

Facing a deep economic crisis and bankruptcy, Sri Lanka was rocked by large protests this July, which led to the resignation of the government.

Numerous Western political leaders and media outlets blamed this uprising on a supposed Chinese “debt trap,” echoing a deceptive narrative that has been thoroughly debunked by mainstream academics.

In reality, the vast majority of the South Asian nation’s foreign debt is owed to the West.

Sri Lanka has a history of struggling with Western debt burdens, having gone through 16 “economic stabilization programs” with the Washington-dominated International Monetary Fund (IMF).

These structural adjustment programs clearly have not worked, given Sri Lanka’s economy has been managed by the IMF for many of the decades since it achieved independence from British colonialism in 1948.

As of 2021, a staggering 81% of Sri Lanka’s foreign debt was owned by US and European financial institutions, as well as Western allies Japan and India.

This pales in comparison to the mere 10% owed to Beijing.

According to official statistics from Sri Lanka’s Department of External Resources, as of the end of April 2021, the plurality of its foreign debt is owned by Western vulture funds and banks, which have nearly half, at 47%.

The top holders of the Sri Lankan government’s debt, in the form of international sovereign bonds (ISBs), are the following firms:

The Asian Development Bank and World Bank, which are thoroughly dominated by the United States, own 13% and 9% of Sri Lanka’s foreign debt, respectively.

Washington’s hegemony over the World Bank is well known, and the US government is the only World Bank Group shareholder with veto power.

Less known is that the Asian Development Bank (ADB) is, too, largely a vehicle of US soft power. Neoconservative DC-based think tank the Center for Strategic and International Studies (CSIS), which is funded by Western governments, affectionately described the ADB as a “strategic asset for the United States,” and a crucial challenger to the much newer, Chinese-led Asian Infrastructure Investment Bank.

“The United States, through its membership in the ADB and with its Indo-Pacific Strategy, seeks to compete with China as a security and economic partner of choice in the region,” boasted CSIS.

Another country that has significant influence over the ADB is Japan, which similarly owns 10% of Sri Lanka’s foreign debt.

An additional 2% of Sri Lanka’s foreign debt was owed to India as of April 2021, although that number has steadily increased since. In early 2022, India was in fact the top lender to Sri Lanka, with New Delhi disbursing 550% more credit than Beijing between January and April.

Both Japan and India are key Western allies, and members of Washington’s anti-China military alliance in the region, the Quad.

Together, these Western firms and their allies Japan and India own 81% of Sri Lanka’s foreign debt – more than three-quarters of its international obligations.

The overwhelming Western role in indebting Sri Lanka is made evident by a graph published by the country’s Department of External Resources, showing the foreign commitments by currency:

As of the end of 2019, less than 5% of Sri Lanka’s foreign debt was denominated in China’s currency the yuan (CNY). On the other hand, nearly two-thirds, 64.6%, was owed in US dollars, along with an additional 14.4% in IMF special drawing rights (SDR) and more than 10% in the Japanese yen (JPY).

Western media reporting on the economic crisis in Sri Lanka, however, ignores these facts, giving the strong, and deeply misleading, impression that the chaos is in large part because of Beijing.

This July, Sri Lanka’s government was forced to resign, after hundreds of thousands of protesters stormed public buildings, setting some on fire, while also occupying the homes of the country’s leaders.

The protests were driven by skyrocketing rates of inflation, as well as rampant corruption and widespread shortages of fuel, food, and medicine – a product of the country’s inability to pay for imports.

In May, Sri Lanka defaulted on its debt. In June, it tried to negotiate another structural adjustment program with the US-dominated International Monetary Fund (IMF). This would have been Sri Lanka’s 17th IMF bailout, but the talks ended without a deal.

Sri Lankan President Gotabaya Rajapaksa, who spent a significant part of his life working in the United States, entered office in 2019 and immediately imposed a series of neoliberal economic policies, which included cutting taxes on corporations.

These neoliberal policies decreased government revenue. And the precarious economic situation was only exacerbated by the impact of the Covid-19 pandemic.

Facing an out-of-control 39.1% inflation rate in May, the Sri Lankan government did a 180 and suddenly raised taxes again, further contributing to popular discontent, which broke out in a social explosion in July.

While 81% of Sri Lanka’s foreign debt is owned by Western financial institutions, Japan, and India, major corporate media outlets sought to blame China for the country’s bankruptcy and subsequent protests.

The Wall Street Journal pointed the finger at Beijing in a deeply misleading article titled “China’s Lending Comes Under Fire as Sri Lankan Debt Crisis Deepens.” The newspaper noted that the crisis “opens a window for India to push back against Chinese influence in the Indian Ocean region.”

US media giant the Associated Press also tried to scapegoat China, and its deceptive news wire was republished by outlets across the world, from ABC News to Saudi Arabia’s Al Arabiya.

US government propaganda outlet Voice of America, which is closely linked to the CIA, employed the same spurious tactics in an article in April titled “China’s Global Image Under Strain as Sri Lanka Faces Debt Trap.”

VOA accused Beijing of “pursuing a kind of ‘debt-trap diplomacy’ meant to bring economically weak countries to their knees, dependent on China for support.”

On social media, the Western propaganda narrative surrounding the July protests in Sri Lanka was even more detached from reality.

“China’s window of opportunity to one day control Sri Lanka probably just closed,” he tweeted on July 9, as the government announced it was resigning.

After working for US spy agencies, Grossman is today an analyst at the Pentagon’s main think tank, the RAND Corporation, where he has pushed a hawkish line against Beijing.

China has funded several large infrastructure projects in Sri Lanka, building an international airport, hospitals, a convention center, a sports stadium, and most controversially a port in the southern coastal town of Hambantota.

The UK government’s BBC sent a reporter to Sri Lanka to investigate these accusations of supposed “Chinese debt traps.” But after speaking to locals, he reluctantly came to the conclusion that the narrative is false.

“The truth is that many independent experts say that we should be wary of the Chinese debt trap narrative, and we’ve found quite a lot of evidence here in Sri Lanka which contradicts it,” BBC host Ben Chu acknowledged.

He explained, “The Hambantota port, well, that was instigated by the Sri Lankans, not by the Chinese. And it can’t currently be used by Chinese military naval vessels, and actually there’s some pretty formidable barriers to that happening.”

“A lot of the projects we’ve been seeing, well, they feel more like white elephants than they do Chinese global strategic assets,” Chu added.

“It is accurate to say that infrastructure development has boomed under Chinese investment, Chinese debt sometimes, but those are things that we’ve actually needed for a long, long time,” Wickramasuriya added.

Chu clarified that, “Importantly, it’s not debt but equity the Chinese own here.”

“So is the debt trap not all it seems?” he asked.

Mainstream Western academics have similarly investigated the claims of “Chinese debt traps,” and come to the conclusion that they do not exist.

Even a professor at Johns Hopkins University’s School of Advanced International Studies, which is notorious for its revolving door with the US government and close links to spy agencies, acknowledged that “the Chinese ‘debt trap’ is a myth.”

Writing in 2021 in the de facto mouthpiece of the DC political establishment, The Atlantic magazine, scholar Deborah Brautigam stated clearly that the debt-trap narrative is “a lie, and a powerful one.”

“Our research shows that Chinese banks are willing to restructure the terms of existing loans and have never actually seized an asset from any country, much less the port of Hambantota,” Brautigam said in the article, which was co-authored by Meg Rithmire, a professor at the stridently anti-socialist Harvard Business School.

They investigated Chinese loans in Sri Lanka, Iraq, Zimbabwe, Ethiopia, Angola, and the Republic of Congo, and “found no ‘asset seizures’ and, despite contract clauses requiring arbitration, no evidence of the use of courts to enforce payments, or application of penalty interest rates.”

They discovered that Beijing cancelled more than $3.4 billion and restructured or refinanced roughly $15 billion of debt in Africa between 2000 and 2019. At least 26 individual loans to African nations were renegotiated.

Western critics have attacked Beijing, claiming there is a lack of transparency surrounding its loans. Brautigam explained that “Chinese lenders prefer to address restructuring quietly, on a bilateral basis, tailoring programs to each situation.”

“Moreover, despite critics’ worries that China could seize its borrower’s assets, we do not see China attempting to take advantage of countries in debt distress,” they added.

“There were no ‘asset seizures’ in the 16 restructuring cases that we found,” the scholars continued. “We have not yet seen cases in Africa where Chinese banks or companies have sued sovereign governments or exercised the option for international arbitration standard in Chinese loan contracts.”