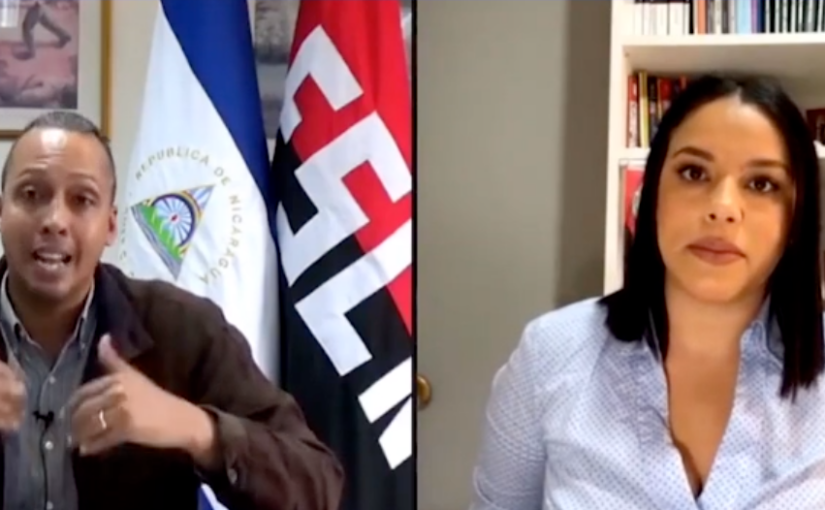 In this second episode of their Latin America Review, Camila Escalante and Ollie Vargas from Kawsachun News interview Michael Campbell, Vice Minister and Presidential Adviser for International Relations and the Greater Caribbean in the Nicaraguan government.

With a focus on Nicaragua’s renewed relationship with China since last December, Campbell makes the important point that, although the diplomatic relations between the two countries were severed by the neoliberal government that emerged when the Sandinista revolution experienced a severe setback in 1990, the Sandinista National Liberation Front (FSLN) and the Communist Party of China (CPC) maintained their close ties throughout the ensuing period. He identifies the reasons for this in the numerous commonalities between the Chinese and Nicaraguan revolutions, for example the elimination of poverty and hunger domestically and the promotion of multipolarity against hegemonism and imperialism on the international level.

Noting that exchanges between the two parties and governments are now taking place on a daily basis, Campbell stresses that they are completely different to Nicaragua and Latin America’s history of relations with the United States and Europe. The former embraces the widest range of people-to-people exchanges whilst the latter is with the oligarchy and at the expense of the people.

The interview also touches on a wide range of other issues, including Nicaragua’s process of joining fellow revolutionary states Cuba and Venezuela in exiting the Organisation of American States (OAS), which Campbell describes as a “ministry of colonies”, the contrast with the Community of Latin American and Caribbean States (CELAC), the Sandinista revival of diversified international relations – for example with Africa, and his government’s pro-people, pro-poor approach to development, a notable achievement of which is that 90% of food consumed in Nicaragua is now produced domestically, with the aim to reach 100% by 2030.

There is also a cultural component, where, after Minister Campbell has explained the unique history of his country’s Caribbean coast, and the extensive autonomy that the revolution has brought to its indigenous and Afro-descendant peoples, he and Ollie prepare a great Nicaraguan dinner party.

This video is reproduced from Tortilla con Sal.