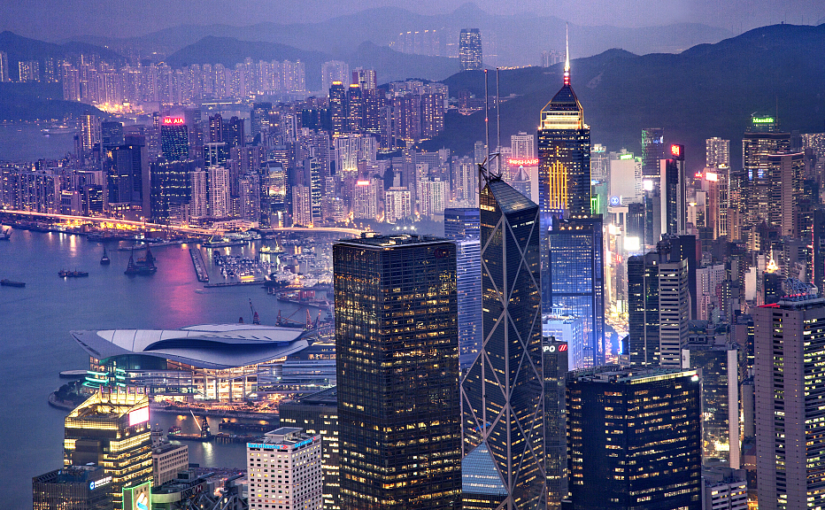 We’re pleased to republish this article from 2020 by Joshua Cho, originally published in FAIR, about the startling hypocrisy in the media coverage of Hong Kong, particularly when compared to the coverage of Puerto Rico and Palestine. There was a storm of articles about the national security law in Hong Kong, with numerous Western media outlets describing it as an example of “colonialism” – ignoring the rather important fact that Hong Kong is part of China. Meanwhile, these same media outlets participate in a conspiracy of silence around the very real colonialism of the US against the people of Puerto Rico and the Israeli state against the Palestinians.

The article has lost none of its relevance in the period since its original publication.

When China passed a national security law for Hong Kong on June 30, criminalizing terrorism, secession and subversion of the Chinese government, as well as collusion with foreign governments, massive condemnations resounded all over Western media.

Vox (5/21/20) described it as an “official death sentence” for the “one country, two systems” model of governance in Hong Kong. Business Insider’s headline (7/1/20) described China’s national security law as having “killed Hong Kong’s pro-democracy movement in less than a year.” The Washington Post (7/3/20) ran an op-ed mocking China’s actions as “nothing less than imperialism with Chinese characteristics.” The Atlantic (7/1/20) described Hong Kong as a “colony once more,” equating the Chinese government with previous British and Japanese “overlords in a distant capital” making “decisions on Hong Kong’s behalf.”

Of course, while Western media describe the national security law as something China “imposed” on Hong Kong, these same outlets rarely if ever present the “one country, two systems” model of governance in Hong Kong as something that was imposed on China by British imperialism, when London refused to unconditionally return the former colony to China. Hong Kong was violently seized from China with the Treaty of Nanking in 1842, after the British waged a war to impose the opium trade on China, causing about 90 million Chinese people to develop an addiction by the end of the 19th century.

FAIR studies (10/26/20, 12/6/20) have found that Hong Kong protests received dramatically more media attention than contemporaneous protests in US client states like Chile, Haiti and Ecuador. FAIR found that the disparity in coverage couldn’t be explained by the protests’ size, significance, number of casualties or response from the authorities, as police crackdowns in US dependencies have been far more brutal and lethal than the crackdown in Hong Kong. The disparity is better explained by corporate journalists considering Hong Kong protesters “worthy victims,” more deserving of coverage because they are protesting against an Official EnemyTM of the US, rather than a government friendly to Washington.

While one cannot describe China’s national security law as an act of “colonialism” or “imperialism,” since Hong Kong is part of China, FAIR conducted a study comparing media coverage of Hong Kong’s national security law and actual colonialism by the US in Puerto Rico, and by its ally Israel in Palestine. From June 16 to July 14, FAIR searched for all relevant results for “Hong Kong+security law,” “Israel+annex” and a general search for “Puerto Rico” on the New York Times and Wall Street Journal’s websites, as well as a Nexis search for CNN’s coverage. FAIR included all relevant results, except reposted content from newswires like Reuters and the Associated Press. Full documentation, including links to all the articles in the sample, can be found here.

In total, there have been 113 articles on China’s new national security law in Hong Kong, 12 on Israel’s plans to unilaterally annex parts of the West Bank on July 1 (which have currently been stalled), and six altogether on Puerto Rico.

Puerto Rico is currently the world’s oldest colony, incorporated into the US empire as spoils of war following the Spanish/American War of 1898, and it currently enjoys less political participation than it did during the Spanish monarchy (Washington Post, 12/13/17). The US has consistently exploited Puerto Rico’s economy for over a century, and has denied the colony representation in Congress or the right to vote in presidential elections (CounterSpin, 8/2/19, 3/18/20). Washington has imposed neoliberal shock doctrine on the island, withholding aid following the devastation left by Hurricane Maria, earthquakes and coronavirus (FAIR.org, 2/9/18; Common Dreams, 1/9/20).

Puerto Rico’s local sovereignty is also compromised by the fact that the Jones Act and the PROMESA Act render it totally dependent on the US federal government for its economic viability, along with having an unelected, Washington-appointed body overseeing the colony’s finances. In 2019, the human rights group Kilómetro Cero documented the police killing of at least four civilians on the island. Puerto Rico’s police have a long history of racist violence and suppression of free speech, suspending the First Amendment after 11 PM to terminate protests in part of 2019.

In FAIR’s sample, two of the six articles on Puerto Rico (New York Times, 7/10/20; CNN, 7/12/20) also discussed the revelation that Trump considered selling Puerto Rico following Hurricane Maria, referring to it as an “asset,” demonstrating the US’s mercantile attitude towards its colony–though neither of these articles used words like “colony” or “imperialism.”

While Israel’s settler colonialism has been going on for decades, FAIR’s search focused on Israel’s plans to annex the West Bank on July 1, because it was a contemporaneous measure taken by a US ally that would permanently end prospects for Palestinian independence under a two-state solution (FAIR.org, 1/31/20, 2/7/20). While some of the disparity in coverage could be explained by the postponement of the planned annexation on July 1 due to coronavirus and international condemnation, even if we confine coverage from the Times, Journal and CNN from June 16 to July 1, there are still 44 articles on China’s national security law for Hong Kong, compared to 12 on Israel’s planned annexation of Palestinian territory.

If, as Israel’s annexation asserts, the West Bank is not an independent nation deserving of self-determination, than Israel/Palestine is an apartheid state where millions of Palestinians are denied democratic rights due to their ethnicity. The denial of these rights has a heavy human cost: According to the Israeli human rights group B’Tselem (1/1/20), Israeli security forces killed 133 Palestinians in 2019, including 28 children. Fifty-six of the people killed took no part in hostilities against Israel, making them victims of Israeli state terrorism.

Corporate media’s particular interest in Hong Kong protests cannot be explained by the Hong Kong police force’s crackdown being exceptionally brutal. After Chinese revolutionaries waged what Chinese people call the War of Liberation against Western and Japanese colonizers, Communists in Hong Kong led uprisings against British colonial rule in 1967, during which colonial police shot to death or otherwise killed at least 17 people. In contrast, while instances of police brutality have been documented during the current Hong Kong protests, none of the four deaths of protesters reported so far in the current unrest have been directly and credibly attributed to police violence. Hong Kong protesters, meanwhile, have set a man on fire, bombed subways, beaten elderly people and young women, and murdered a 70-year-old man by hurling a brick at his head (South China Morning Post, 11/12/19, 6/3/20).

Nor does international condemnation explain the greater attention US media pay to China’s assertion of control over its own territory compared to actual colonialism in Puerto Rico and Palestine: More countries support China’s actions defending its sovereignty than oppose them, and the UN has passed numerous resolutions calling for Puerto Rican and Palestinian self-determination.

Not only was far more media attention given to the national security law in Hong Kong, there was also a huge difference in tone in the coverage. The Journal ran numerous editorials (7/1/20, 7/8/20, 7/14/20) and op-eds (7/2/20, 7/13/20) worrying about Hong Kong’s “endangered elections,” and mulling over how to best “punish China” for its “illegal takeover,” as well as ways to “curb Chinese intimidation” of Western corporations, pointing to laws forbidding companies to boycott Israel as a model. However, the Journal only ran one op-ed (7/1/20) on the West Bank, which advised Netanyahu to “slice some pieces off the annexation salami,” because Israel’s illegal takeover works better as a “bargaining chip” than “as a fait accompli,” and only one column on Puerto Rico (6/22/20), a celebration of the privatization of Puerto Rico’s bankrupt public utility.

The Times’ editorial board (7/1/20) urged Trump to “pressure” China, because “history will not be kind to those who did nothing to try to stop Beijing’s human rights abuses”; the paper did not speculate on history’s attitude toward the US’s own human rights abuses in Puerto Rico, or its support for those of its ally Israel in Palestine.

The paper ran numerous articles (7/7/20, 7/8/20, 7/14/20) on the national security law’s suppression of political expression in Hong Kong, noting that the Times will be moving part of its Hong Kong bureau to Seoul. The paper unironically noted that it must partially relocate to South Korea for that country’s “independent press,” and because some journalists fear Beijing will “crack down on activism and speech.” South Korea’s defamation laws can imprison people for three years for publishing true statements its government deems not in the public interest, and its authoritarian National Security Act censors and punishes people for reading and voicing opinions favorable to North Korea.

Judging by the volume and tone of media coverage about China’s national security law, one might get the impression that the law is an unprecedented and obvious threat to civil liberties. While there are legitimate concerns about how widely it can be applied (the vaguely worded law appears to assert “long-arm jurisdiction” for violations committed outside the territory, although the Chinese government denies this), China passed a similar law in 2009 for its other autonomous region, Macau—which was returned to China by Portugal in 1999—and Macau still remains autonomous. Plenty of other countries, including the US, already have anti-sedition laws on the books.

CNN (6/29/20) notes that anti-separatism is the “norm worldwide,” and a UN resolution states:

Any attempt aimed at the partial or total disruption of the national unity and the territorial integrity of a country is incompatible with the purposes and principles of the Charter of the United Nations.

While Hong Kong protesters wave US and British colonial flags for varying reasons, some have called on US President Donald Trump and UK Prime Minister Boris Johnson to “liberate” the territory and “fight for us.” The US government funded last year’s protests through the US Agency for Global Media (FAIR.org, 7/15/20). The National Endowment for Democracy (NED)—which performs the foreign government–subverting work the CIA used to do more covertly—has also given millions of dollars in support. Some of its leaders have openly colluded with US officials, and yearn for a return to British colonialism, which had little semblance of democracy throughout most of its occupation. Given that the United States criminalizes foreign interference in its elections, it should hardly be surprising or shocking that China would pass similar laws.

2 thoughts on “Chinese ‘imperialism’ in Hong Kong concerns US Media; Puerto Rican, Palestinian colonies, not so much”