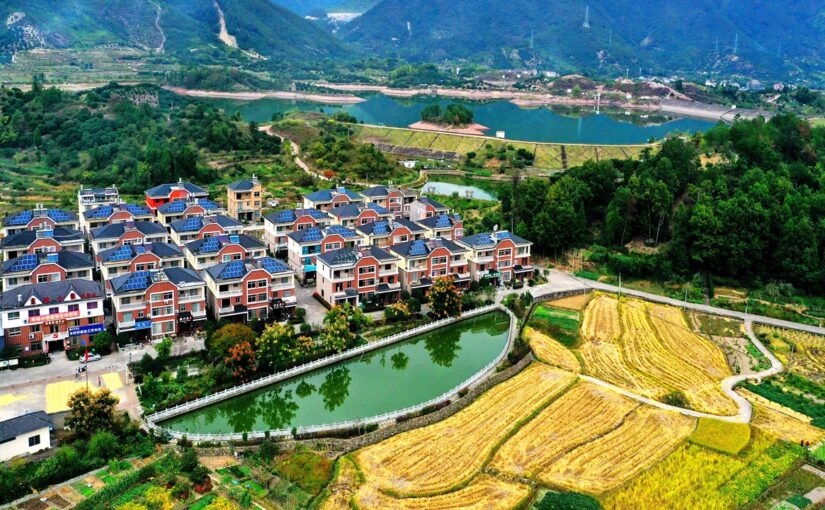 The following article by Friends of Socialist China co-editor Carlos Martinez, written for China Daily, outlines the progress made in China over the past decade, and describes the rising emphasis on common prosperity and sustainable development.

After eradicating absolute poverty at the end of 2020 following the most systematic and extensive poverty alleviation program in history, China achieved its goal of becoming a moderately prosperous society in all respects. This achievement is nothing short of extraordinary, and reflects the enormous commitment of the Chinese leadership, government and people to fundamental human rights.

What’s more, the goal of eliminating extreme poverty was fulfilled while the country was concurrently battling the COVID-19 pandemic which has driven millions into poverty around the world.

What does it mean for a Chinese person to have risen out of extreme poverty? It is more than simply surpassing the World Bank-defined income threshold of $1.90 per day. China’s definition also includes two assurances (for adequate food and clothing) and three guarantees (access to medical services, safe housing with drinking water and electricity, and at least nine years of free education).

Anyone who has visited rural areas elsewhere in the developing world－whether in Asia, Africa, Latin America, the Middle East or the Caribbean－will understand that for a huge country of 1.4 billion people to be able to meet the basic needs of every citizen is a historic accomplishment. Such an accomplishment is built on the firm foundations of the Chinese revolution, the strength and wisdom of the Communist Party of China, and the system of whole-process people’s democracy.

With the completion of the targeted poverty alleviation campaign and the accomplishment of the first centenary goal of building a moderately prosperous society in all respects, China has scored an important victory. Yet the war on poverty continues, with focus now shifting toward tackling relative poverty: improving per capita GDP, revitalizing rural areas, and reducing inequality between regions and groups. It is time for “making the cake bigger and better and sharing it fairly,” as Foreign Ministry spokesperson Wang Wenbin put it recently.

In an article titled “Making Solid Progress Toward Common Prosperity”, based on a speech at the 10th meeting of the Central Financial and Economic Affairs Commission on Aug 17, 2021, President Xi Jinping said that the success of the targeted poverty alleviation campaign had “created conditions conducive to bringing about prosperity for all”, and that China was now moving into “a historical stage in which we will make solid steps toward common prosperity”.

There have already been a number of important developments in this direction, including a regulatory crackdown on the private education sector, a set of measures to prevent gaming addiction among children, the imposition of stricter rent controls, and several laws and regulations to protect the rights of workers in the “gig economy”. Tech companies “must now sign labor contracts with their gig workers, and provide them with the insurance coverage of State-run insurers”. Also, China’s Trade Union Law has been revised to enable and encourage unionization of gig economy workers.

Alongside the transition from moderate prosperity to common prosperity, there is a parallel transition from rapid, quantitative growth to high-quality, sustainable development, not based exclusively on GDP figures but incorporating a wide range of social, economic and environmental factors.

A key component of high-quality development has been a strong emphasis on science and technology. China’s research and development spending as a percentage of GDP has doubled over the last two decades, placing it among the handful of countries that spend more than 2 percent of GDP on research and development. China’s overall R&D spending is second only to the United States, in spite of China still being a developing country.

These efforts are already paying off, with China emerging as a global leader in telecommunications, renewable energy, artificial intelligence, high-speed rail, nanotechnology, and several other important areas of science and technology. According to Scientific American magazine, “China is pulling ahead” in quantum computing－a critical area of research that is expected to have far-reaching consequences for human development in the coming decades.

In his famous 2013 speech, “Usher in a New Era of Ecological Progress”, Xi Jinping said that China must “strike a balance between economic growth and environmental protection” and that it should “never again seek economic growth at the cost of the environment”. In the period since then, China has emerged as an undisputed world leader in the production and use of renewable energy, as well as making important progress in afforestation, protection of biodiversity, and tackling pollution.

And China’s pledge to peak greenhouse gas emissions before 2030 and achieve carbon neutrality before 2060 constitutes a historic contribution to the global fight against climate change.

In summary, China has taken huge strides toward building “a great modern socialist country that is prosperous strong, democratic, culturally advanced, harmonious, and beautiful”. Through the Belt and Road Initiative and its policy of win-win cooperation and global solidarity, China is sharing its progress with the peoples of the world, and establishing itself as a powerful contributor to humanity’s common causes of peace, friendship and development.

One thought on “Time for pursuing common prosperity”