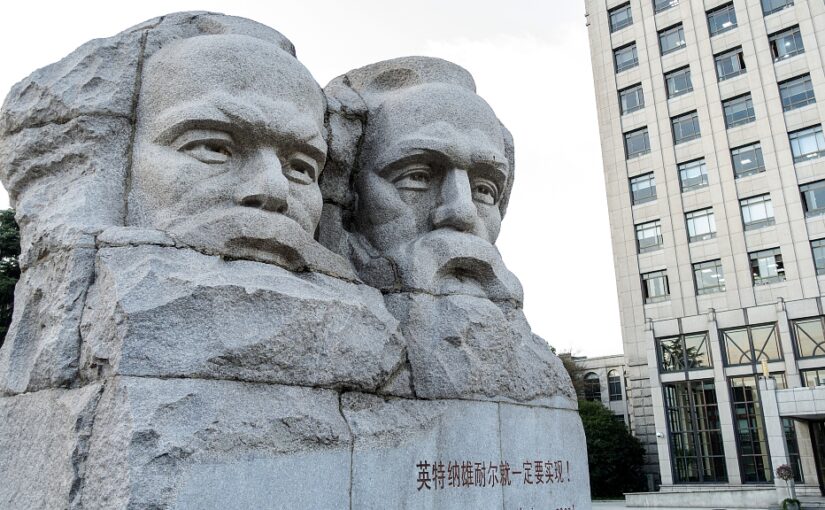 On July 28, Friends of Socialist China Co-Editor Keith Bennett joined more than 300 delegates from more than 100 Marxist political parties and organisations from more than 70 countries at the CPC and World Marxist Political Parties Forum held online with the theme, Adapting Marxism to the National Conditions and the Times of the 21st Century, organised by the International Department of the Central Committee of the Communist Party of China (CPC).

Xi Jinping pointed out that Marxism is an open ended theory that never ceases to develop. And it can only thrive when adapted to national conditions. Socialism with Chinese characteristics had been created by integrating Marxism with China’s specific conditions and fine traditional culture. Faced with changes unseen in a century, Marxism lights up the way forward for humanity and the Communist Party of China wishes to exchange experiences with Marxist parties worldwide.

In the plenary session, a keynote speech was given by Liu Jianchao, Minister of the CPC International Department, who stressed that the ‘end of history’ will never happen and that the contradiction between socialism and capitalism on a world scale was tipping in favour of socialism.

He was followed by Comrade Pany Yathotou, Member of the Political Bureau of the Central Committee of the Lao People’s Revolutionary Party (LPRP) and Vice-President of the Lao People’s Democratic Republic; leading comrades from the Cuban and Vietnamese communist parties; Solly Mapaila, the newly-elected General Secretary of the South African Communist Party; Jeronimo de Sousa, General Secretary of the Portuguese Communist Party; and Rossana Cambron, Co-Leader of the Communist Party of the USA.

Following the plenary session, two parallel sessions were held, in which, besides representatives of the CPC, leaders of the following parties presented their contributions:

This was an extremely important and inspiring event – a potential landmark in strengthening the unity and cohesion of the international communist movement around the advanced experience of the socialist countries and their theoretical innovations. We are pleased to republish the following four reports. The first from the Xinhua News Agency reports on the message sent to the forum by Comrade Xi Jinping. This is followed by a report carried on the website of the CPC International Department and then reports from Nhan Dan, the main newspaper of the Communist Party of Vietnam, and from the Cuban news agency Prensa Latina, highlighting their countries’ contributions to the event.

Chinese President Xi Jinping said on Thursday that Marxism has been showing new vitality in the 21st century, calling on all Marxist political parties to make the theory more relevant to the national conditions and the times.

Xi made the remarks in a congratulatory message to the Communist Party of China (CPC) and World Marxist Political Parties Forum in Beijing.

Marxism is an open, developing theory, said Xi, also general secretary of the CPC Central Committee. Only when it is adapted to each country’s specific condition can it take root in a country, and only when it keeps abreast of the times can it be full of vitality.

He said Marxism in the 21st century has been opening up new horizons and increasingly showing new vitality, thanks to the arduous exploration and concerted efforts of Marxist political parties of all countries.

Xi said the CPC has been integrating the basic principles of Marxism with China’s specific conditions and fine traditional Chinese culture, adapting Marxism to the Chinese context and the times, and unswervingly forging ahead on the path of socialism with Chinese characteristics.

Profound changes unseen in a century are evolving rapidly across the world, and humanity again stands at a crossroads in history, he noted.

It is the common responsibility of Marxist political parties to make Marxism more relevant to national conditions and the times to illuminate the road ahead for humanity with the light of truth, Xi said.

Xi said the CPC is ready to strengthen exchanges and dialogue with Marxist political parties in other countries, keep in mind their own national conditions and the trend of the times, and continue to enrich and develop Marxism, so that Marxism will display greater power of truth in the process of jointly building a community with a shared future for mankind.

The forum is hosted by the International Department of the CPC Central Committee. More than 300 representatives from over 100 Marxist, left-wing political parties and political organizations in more than 70 countries attended the forum virtually.

In his keynote speech, Liu Jianchao, Minister of the IDCPC, said that Marxism is a great creation in human history, which has greatly advanced the process of human civilization and is still a system of thought and discourse with great international influence. Today, there are hundreds of Marxist political parties with hundreds of millions of party members in the world, which are a powerful force. Marxist political parties in various countries have made diverse explorations and innovations to enrich and develop Marxism, and have made a series of exciting and important achievements, which fully demonstrate the scientific and truthful nature of Marxism and that the future of socialism is bright.

Trung read a letter of congratulations by Party General Secretary Nguyen Phu Trong to the forum, in which the Vietnamese Party leader spoke highly of the CPC’s organisation of the event, regarding this as an opportunity to pay tribute to Karl Marx, Friedrich Engels and Vladimir Ilyich Lenin – great thinkers and eminent revolutionaries of international communist and workers’ movements.

The forum also highlights the great contributions and enduring values of Marxism-Leninism and serves as a platform for the delegates to share experience in applying Marxism-Leninism in each Party and country, the Vietnamese Party leader added.

He used the occasion to congratulate the CPC and China on noted achievements they have recorded in socialism building, including their innovative application of Marxism-Leninism.

In Vietnam, President Ho Chi Minh’s Thought was also formed as a result of the innovative application of Marxism-Leninism, lessons drawn from international communist and workers’ movements, the upholding and development of national traditional values and the absorption of the quintessence of human culture, Trong noted.

Over the past more than 90 years, Marxism-Leninism and the Ho Chi Minh Thought have been the ideological foundation and the lodestar for the CPV, he said, stressing that Marxism-Leninism will continue to be a torch that lights up the path for Vietnam’s revolution in the new era.

On behalf of the Vietnamese Party, State and people, Trong thanked Marxist political parties and progressive forces in the world, including the Chinese Party and people, for their support for Vietnam through different periods.

The CPV always attaches importance to and stands ready to expand cooperation with the Marxist parties and progressive forces during struggles for common peace, friendship, democracy and prosperity, and the constant development of Marxism-Leninism, he affirmed.

Within the framework of the forum, Nguyen Van Thanh, Vice Chairman of the Central Theory Council, delivered a speech highlighting the significance of Marxism-Leninism and Vietnam’s innovative application and development of Marxism-Leninism.

Party General Secretary and President of China Xi Jinping also sent a congratulatory message to the forum, saying that the CPC is willing to step up exchanges with the Marxist political parties and work together to diversify and promote Marxism-Leninism.

The forum brought together about 300 representatives from 100 Marxist political parties of 70 countries worldwide.

Diaz-Canel calls for unity among communist parties around the world

The first secretary of the Communist Party of Cuba (PCC), Miguel Díaz-Canel, described unity among the world’s communist groups as necessary and urgent, Granma newspaper reported on its website on Thursday.

According to the newspaper, in a message to the International Forum of Marxist Parties, held virtually and organized by the Communist Party of China, the Cuban head of State expressed gratitude for the opportunity to exchange theoretical advances and practical experiences of these organizations.

In the text, read in front of representatives of 109 parties from all over the world by Rosario Penton, rector of the Ñico Lopez PCC Superior School, the head of State stressed that since its emergence, Marxism have given the scientific foundation to the class struggles of the world proletariat and of the international working class.

He pointed out that the objectivity of its postulates is revealed in a particular way in times of crisis.

Diaz-Canel referred in the letter to the mistakes made in the name of the Marxist tradition, the setbacks and deformations; although he highlighted the ways in which Marxism in Cuba merged with the best of the revolutionary national tradition, which had among its highest exponents Jose Marti and Fidel Castro Ruz.

He affirmed that for Cubans, being a Marxist means permanent learning from practice to integrate the development of the social sciences.

Diaz-Canel highlighted the ideas, concepts and guidelines approved in the 8th PCC Congress, and pointed out the three main tasks that have become strategies for partisan work: the economic battle, unity and struggle for peace and ideological firmness.

He pointed out that Cuba is working on the formation of a critical and transforming subject of prosperous, sustainable and democratic socialism, as part of the process of updating its development model.

We are firmly convinced that socialism is the only path to development with social justice as a creative overcoming of capitalism, its unsustainable irrationality and the values that guide it, he added.

Diaz-Canel recalled the positive and negative lessons of other countries that have previously embarked on this path and what it means to be close to and permanently stalking an adversary as powerful as the United States Government.

He denounced the growing aggressiveness of that power against Cuba, as well as the use of perverse instruments of unconventional warfare, the media intoxication laboratories, the disinformation campaign, lies, double standards and hypocrisy, through social networks.

“The reality of today’s world confirms that it is increasingly necessary and urgent for Marxist parties to unite to face the great challenges that lie ahead. Only unity in diversity will ensure victory,” the message concluded.